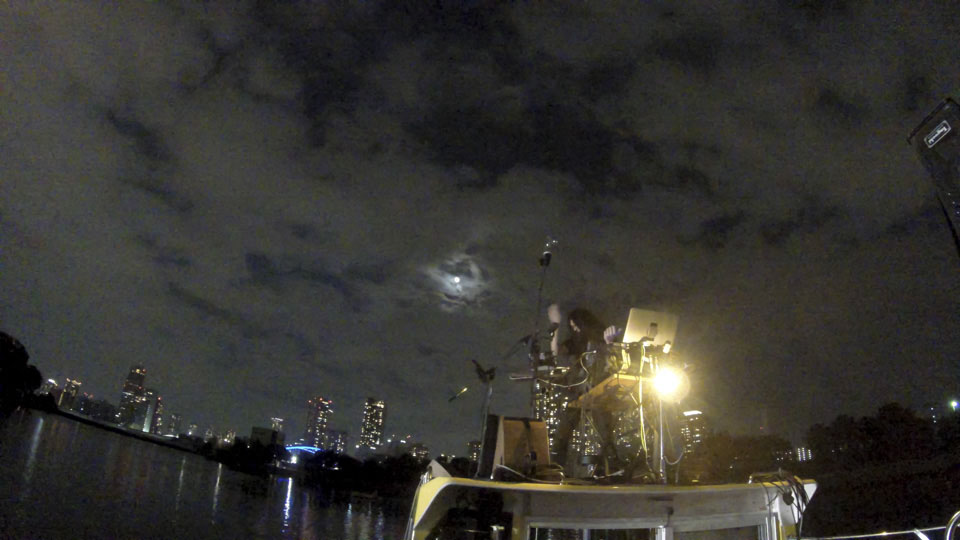 From the viewpoint of an astronaut in space, Earth probably looks much the same now as it did in 2019. For us living down here on the surface, however, the past year brought dramatic change. Our horizons of awareness change depending on our point of view. DOMBRA, a performance by Fuyuki Yamakawa, made for the rare opportunity to recognize the importance of viewing the world while on the move.

At four in the afternoon, we boarded two boats at a canal five minutes on foot from Tamachi Station. The vessels set course for Tokyo Bay, where we – a limited audience set to be treated to a trial performance – would be watching a show by an artist on another boat. The program would be performed while on the move – a completely new experience for me. Once out on the bay, we encountered plenty of waves, wind, and passing ships, some of them quite large. I became a bit worried as to whether the artist would really be able to do his thing under such circumstances, but my fears proved groundless. The result was a uniquely original and exciting performance – a powerful work of art that placed the current pandemic in a historical context while demonstrating the potential to open up new avenues into tomorrow. 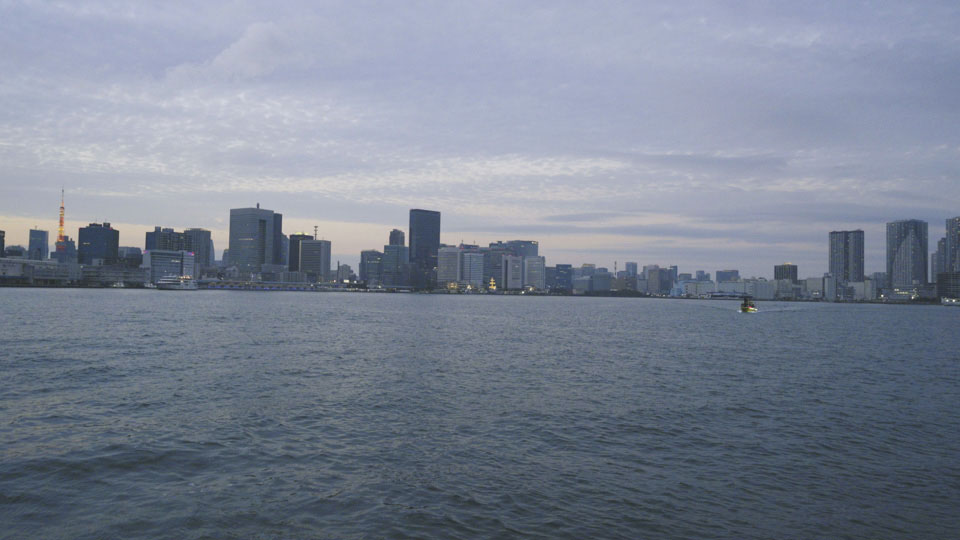 The lifetide that is art

The boats carrying us onlookers, event staff, and a film and photography crew soon reached Tokyo Bay. Out on deck, a cold winter wind was blowing. We jokingly wondered where it was coming from; down from the sky, or maybe from underwater, as would be fitting of Fuyuki Yamakawa. As we chatted, the cries of seagulls could be heard ever closer. One boat, the one being followed by a flock of these birds, had a stage set up on top of it. The seagulls’ noise blended with Yamakawa’s throat-singing and the sound of a gong, mixing into a strange cluster of sound above the waves. Eventually we could hear Yamakawa’s voice.

“Every year, these black-headed gulls fly across borders from faraway Kamchatka and Siberia here to Tokyo Bay.

If you are true to the name you bear / there’s one thing I would ask you / capital-bird / does the person I love / still wait for me or not?

This poem was recited by Ariwara no Narihira, who shared with a black-headed gull his longing for a special someone left behind in Kyoto. The metropolitan government has designated the black-headed gull Tokyo’s official bird.” 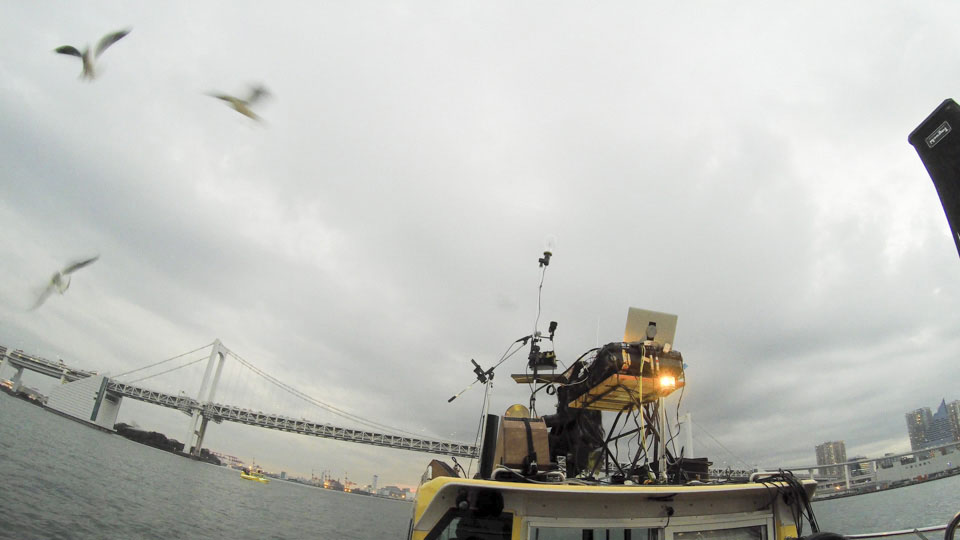 That introduction kicked off DOMBRA, a performance that pursued a variety of connections between Tokyo Bay and our planet. Onlookers taking in the thrilling show on boats contributed to its ability to make visible the complex currents that flow within and outside the bay, on shore and on water, on the surface and in the depths…… Yamakawa’s introduction revealed to us the perspective from which the artist gazes out over this expanse of water. Blowing a bird whistle, he uttered the following words:

“The seagulls don’t care what some Narihira fellow might have said, and they sure don’t see themselves as Tokyo’s birds!”

Seagulls have no concept of Russia or Japan, and Tokyo Bay belongs to them. When seen from the sky, the international cruise terminal and container wharfs are nothing but elements in the background. While the pandemic has restricted the movement of people, the flow of goods has continued uninterrupted thanks to logistics workers who have stayed on the job while trying to minimize the risk of infection. The virus is a parasite transmitted from animals to humans. Guests, hosts, and parasites lead an entangled existence. Changing our focus from birds to containers brings the realities of global capitalism into view. Some 2.35 million containers passed through the port of Tokyo in the first half of 2020 alone. The lecture-performance skillfully incorporated such actualities, all while it sought to relativize our reality by altering our point of view. 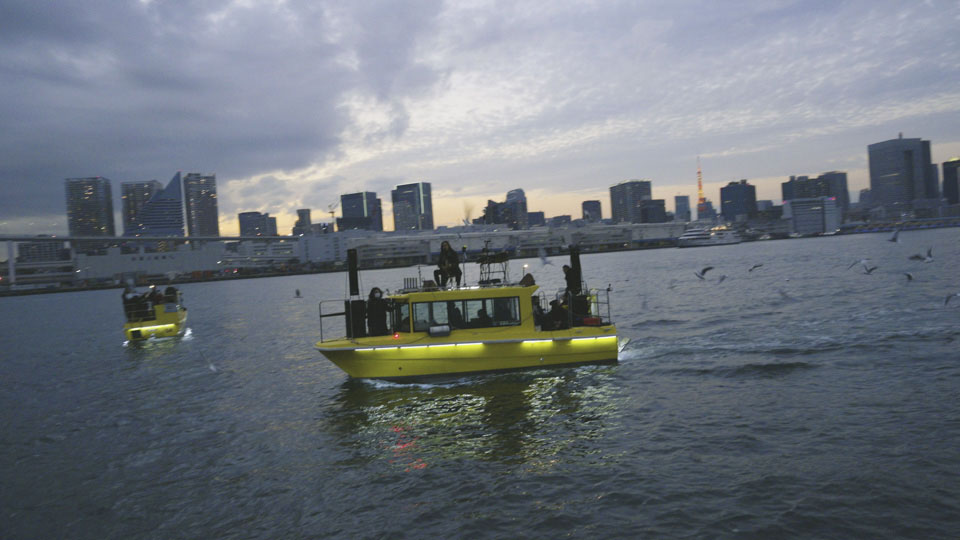 “‘Please set me free’ – these are the words of a Kurdish man held in detention at the Tokyo Regional Immigration Bureau. There are people who flee political persecution, leaving their homelands behind and risking their lives crossing borders to come here, to Japan. But here, refused refugee status, they are treated like criminals and kept in detention right there, on the upper floors of the Tokyo Regional Immigration Bureau building.”

Without noticing, we had approached a place where to strain our ears and listen for the voiceless screams of humans bound by national borders and denied the freedom to fly like seagulls. “Among the 10,375 applications for refugee status filed in Japan, the government approved 44.” The political nature of the guest-host relationship came into view. Next, we heard about how this ties in with the history of Odaiba – a coastal battery built to guard against attacks by foreign ships. Meanwhile, the Fuji Television building, from where travel shows are broadcast, was where Yamakawa’s father made his career as a popular TV presenter. 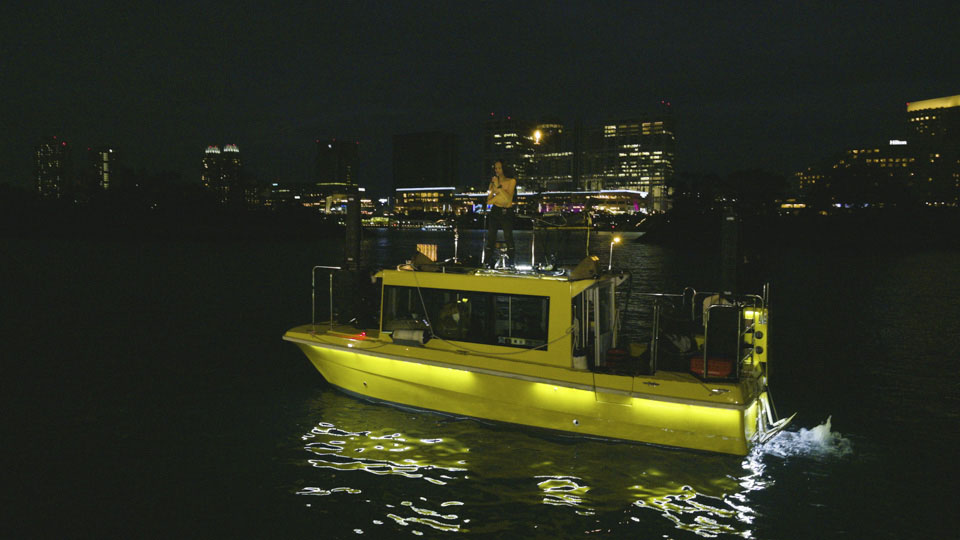 Around this point, the boat carrying Yamakawa turned, in my eyes, from a mere vessel traveling on the water into a magical machine bringing information flows into view, swimming upstream against the passage of time. In this wondrous performance, the artist appeared to draw strength especially from his continued engagement at the Oshima Seishoen Sanatorium, a national treatment facility for leprosy patients on a small island off the city of Takamatsu in Kagawa Prefecture. When Yamakawa brought stones from this “quarantine island” to the capital and sank them in Tokyo Bay, he revealed how deep the history of isolating leprosy patients – something that ties in with the origins of the practice of quarantine – truly goes. As the artist made clear, this act transformed Tokyo Bay – where countless memories that were washed away (=forgotten) have ended up and settled into the sediment – into an “unconscious memory device.” 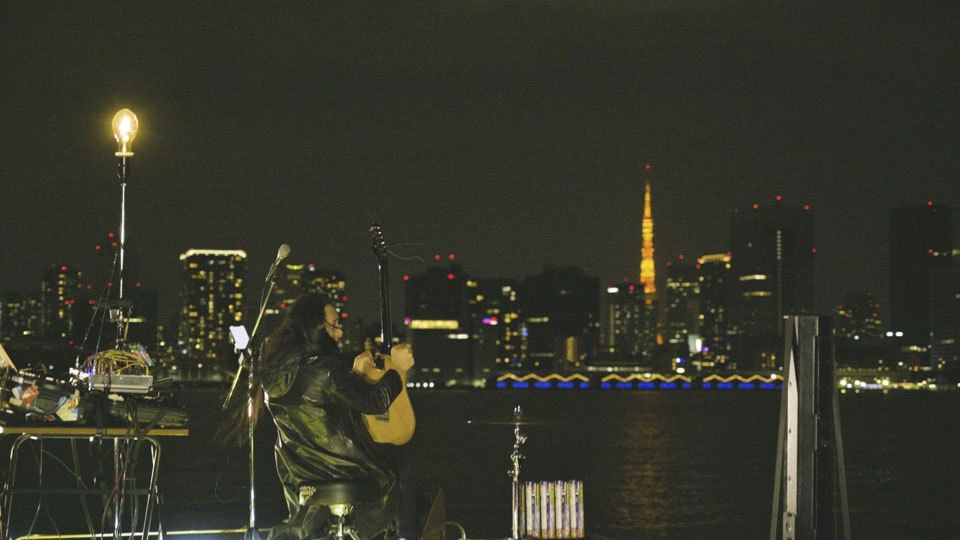 As darkness fell on this day in November 2020, with the entire world in quarantine, the round face of the moon shyly revealed itself between the clouds. We heard that this was the evening of the spring tide, when vast amounts of water would begin flowing from north to south. Yamakawa’s playing grew more intense, as if the invisible forces of the Earth and Moon were egging him on. The chorus came to us with the sea breeze……

Bruce Lee’s voice. Suddenly, I am transported from the sea to the middle of a metropolis. A vivid memory from a year and a half ago – that of 500,000 citizens marching in Hong Kong –has come back to me. It’s the water of those who cannot go where they want, when they want, and of those held captive for protecting freedom. The echo, as it disappeared over the horizon along with all manner of flows, transformed into the cry of a shapeless creature neither bird nor wolf, brought me a flicker of hope.