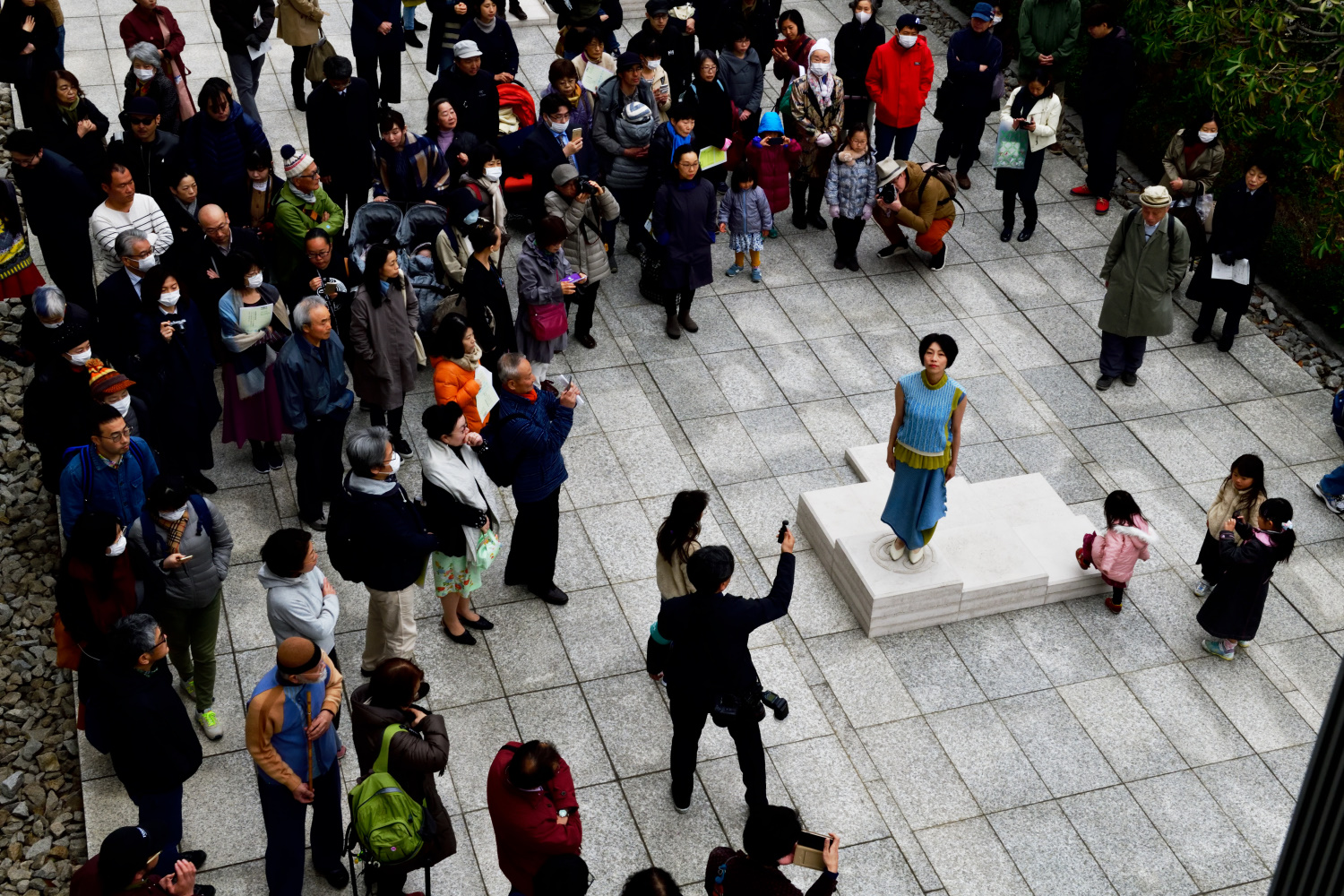 Spring 2019 brought with it two site-specific performances that blurred the border between performing and visual arts, thereby stimulating their audiences in a variety of ways. These performances took place at the Museum of Contemporary Art Tokyo (MOT) and the KAAT Kanagawa Arts Theatre. The efforts of these institutions, which sought to further interaction between different types of art and their respective connoisseurs, resulted in a pair of performances with great depth.

The fresh experiences on offer at both venues were provided by sound artist Akio Suzuki and dancer and visual artist Hiromi Miyakita, who have been working together both in Japan and internationally since 2011. While the performance at MOT was held outdoors and that at KAAT, which also saw artist Takehito Koganezawa play a part, took place indoors, the shows had plenty in common. Both Suzuki’s sound and Miyakita’s movement turned something ordinary into a thread woven through an unusual space.

Let us first look at the performance held to commemorate the release of “An Encouragement of Dawdling –‘o to da te’ and ‘no zo mi’” (2018-19), held as part of the Museum of Contemporary Art Tokyo’s Grand Reopening Exhibition –Collection exhibit: “MOT Collection Part 1: Pleased to meet you. New Acquisitions in recent years”. Visitors were invited to enjoy sculptures and new additions to the museum’s collection while watching a dancer move through an open-air exhibition space. When Miyakita came across a plate on the floor, she would step up on it, extending her back and arms. These plates were part of the “o to da te” series, which Suzuki launched in Berlin in 1996 and which has travelled the world ever since. They function as “echo points” that turn viewers’ attention to the sounds around them. Round plates (46cm across and 5cm high, made of concrete) with an “o to da te” mark, which combines ears and feet, were set up in 12 locations within and outside the museum (*１). 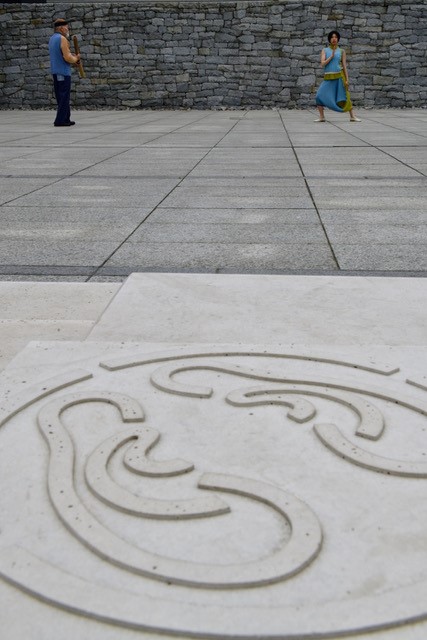 Turning toward a mysterious tone that was closing in little by little, onlookers noticed Suzuki playing a flute. Dancing as if drifting through the air, Miyakita approached “no zo mi” －five small piles of rectangular concrete plates (60cm square, 8cm high), arranged in the form of stairs －and listened carefully. The children running around the space had started imitating Miyakita’s dancing and were laughing to Suzuki’s tune. The energy of the children, which softened the museum’s stoical appearance, spurred from both Suzuki’s playful work and the loose tempo of the dancing. The choreography made limited use of intense spins and jumps, incorporating everyday actions such as standing still and sitting instead －a casual approach that also allowed very young children to take part. When a little one would approach Miyakita, she would respond with eye contact, thus engaging in nonverbal communication.

Such warmth that accommodates diverse audiences is also fundamental to Suzuki’s playing. “Kyu-kyu” is the sound of polishing a hand mirror with a sponge, while “koroppon” is emitted when using a thin stick to knock on a small glass bottle wrapped in a towel. Realizing that the many strange sounds I heard are produced by familiar items such as hoses and small stones made me want to hear the sound of everything I saw around me. It is as if the impurities of mind and body are swept away by the poetic sound and dancing; my breathing gradually becomes deeper, and I start noticing the smells of the nearby park and waterways. 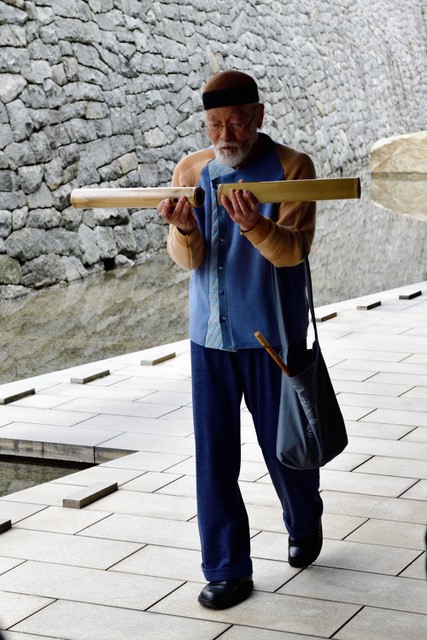 A space that allows a wide variety of people to develop a common understanding also came into being at “Ha da ka mi ta i”, the opening performance of Takehito Koganezawa’s “Naked Theatre”, an exhibition of contemporary art held at KAAT. In place of the sense of freedom felt at MOT, here the audience was immersed in a tension that strained both eyes and ears. In the past, the Medium Studio at KAAT has hosted several noteworthy works, including Chiharu Shiota’s “The Locked Room” (2016), an installation in which red threads were set up throughout the studio, and “Nozoki/know the key”, choreographed and performed by Shintaro Hirahara. Here, the creativity of artists and artisans, fully versed in the secrets of theater equipment brings about previously unknown forms of expression.

Before the performance, I walked through a black box in which a smoke machine was used to blur the borders of the three dimensions. Whenever the flickering lights and the smoke pouring down passed through the holes in the white partitions found throughout the space, all decorated with Koganezawa’s daughter’s drawings, the scenery would change before the audience. The glittering and disappearing neon lights in the ceiling mixed with their silhouettes and a complex sound, giving the impression of an environment endlessly generated anew.

In the locker room next door, the Woman and Man (*2) versions of the “Half Shaman” (2019) video piece were playing on two monitors. The film, in which a deformed human figure struggles against civilization, gave off an eerie but humorous vibe. 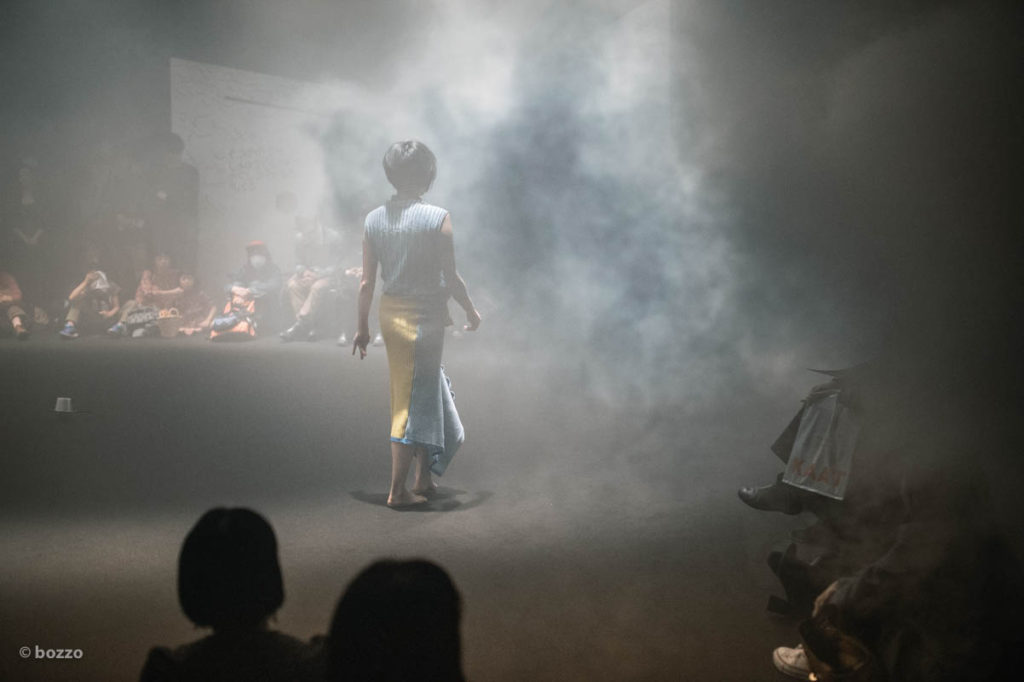 The performance started with Koganezawa placing a lamp made of various daily essentials on the floor of the Medium Studio. The handmade costumes (by Hanako Washio) worn by Suzuki and Miyakita were designed to evoke the sea in Kyotango, where the two are based. The blue-toned, collage-style knitwear changed color when interacting with the lighting and smoke.

Blurred eyesight enhances one’s sense of hearing. Suzuki’s location is revealed by a light-hearted rhythm; the changing sound carries a sense of mystery with it and lends our imaginations wings. Miyakita’s hand, sticking out from a cut in one of the partitions, is something straight out of a horror movie. When a spotlight parts the fog diagonally from above, the dancer raises her arms and black shadows extend from her fingers as if splitting the path of light in two, conjuring up an illusion of an extended body. Koganezawa obstructs the light with a board, turning it into a flash that passes across the space in a sharp trajectory. The abstract image and shape formed by these overlapping elements, never to be seen again, remains clear in my mind. 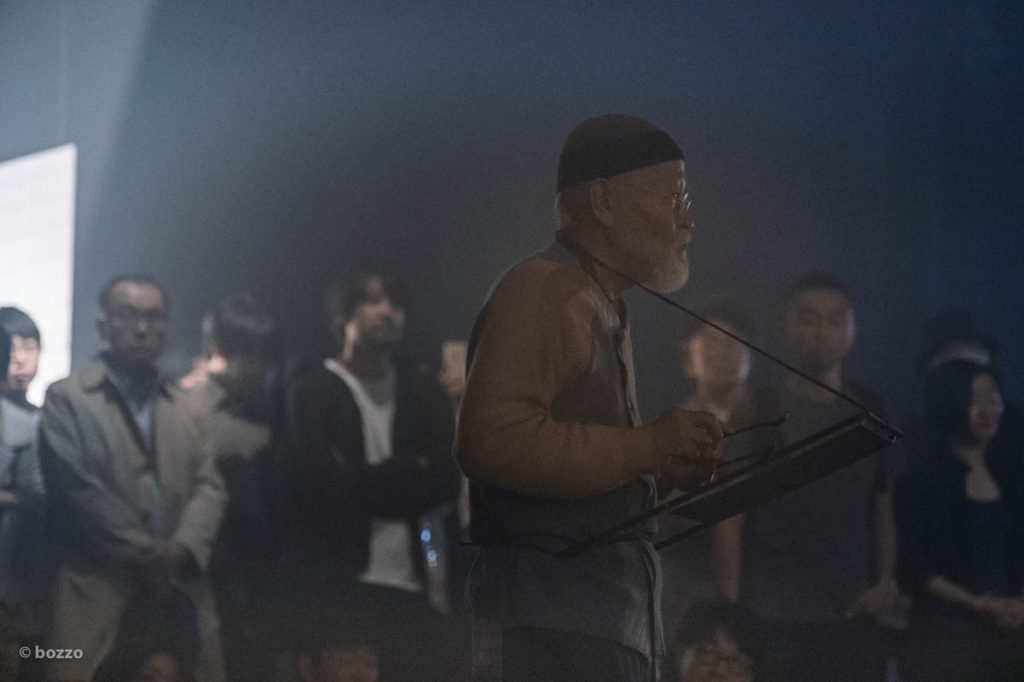 These two highly experimental performances surely encouraged each member of their audiences, watching from differing points of view, to make unexpected discoveries. Together, the sounds, bodily movements, light, and art roused by Suzuki and Miyakita brought about a thrilling experience, which once again reminded me of the inherent value of transient live art.

2:“Half Shaman: Man” (2019) will be played in giant form in the KAAT entrance atrium until early August 2019. The screen, which sees the dancer fused with KAAT’s escalator and floor, sometimes evokes “a kaleidoscopic view of the relationship between individual and society.