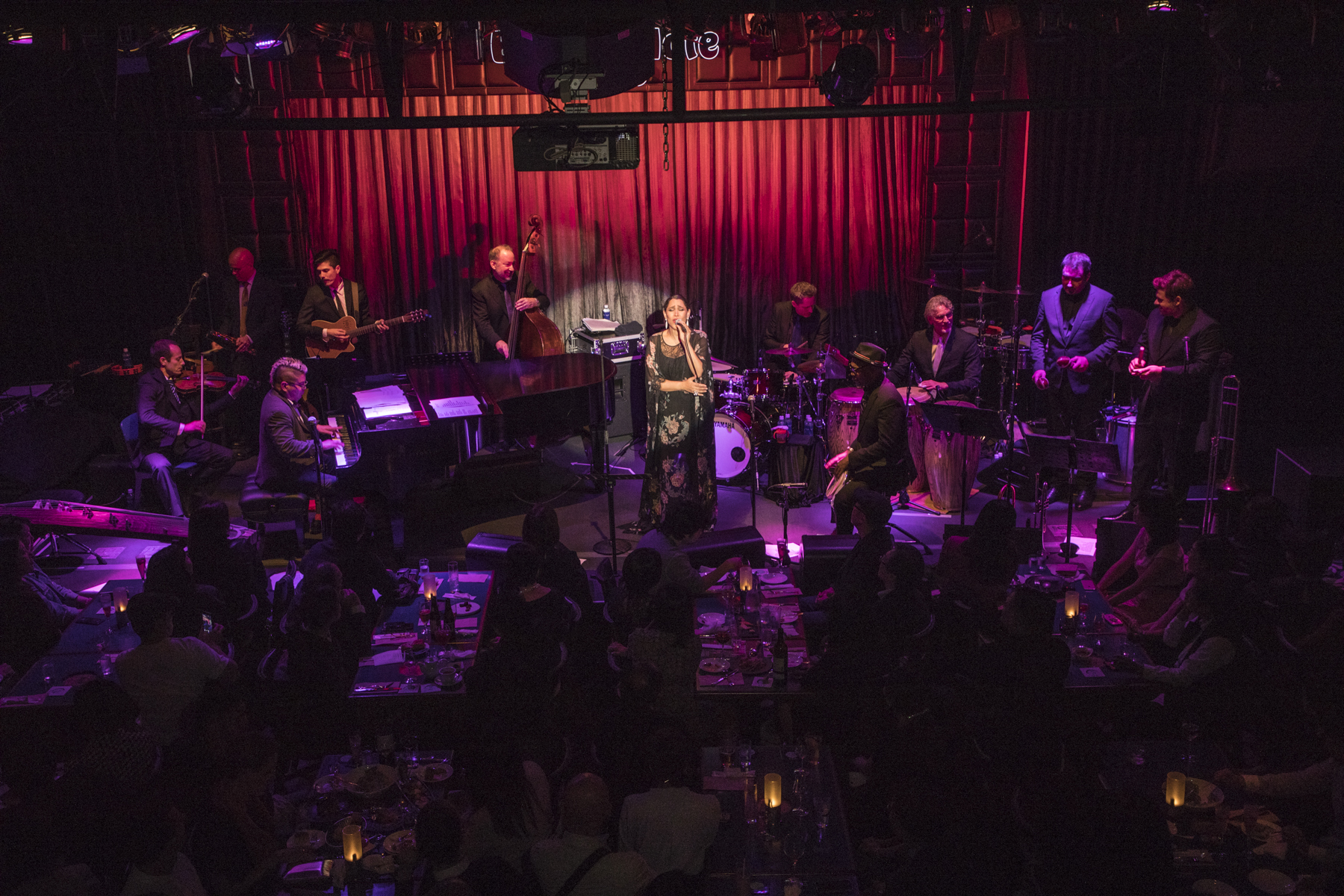 When I heard their recorded music for the first time in the 2000s, it sounded to me at first like a reissue of old material. Or was it a shrewd in-house combo in a hotel lounge somewhere in, say, Germany? Pink Martini play standards from various countries and ages in the style of a jazz band from the golden days of Hollywood cinema. Formed in 1994 by pianist and leader Thomas M. Lauderdale in Portland, Oregon, they made their European debut still in the same year at the Cannes Film Festival. Back home in America, they have been playing at such venues as Carnegie Hall and Hollywood Bowl, sometimes accompanied by a full symphony orchestra. On their 2011 album “1969,” Pink Martini collaborated with Saori Yuki, whose work Lauderdale had discovered in a used record store. He immediately became a fan and ventured out to communicate the beautifully melodic and lyric qualities of Japanese popular songs to the world. 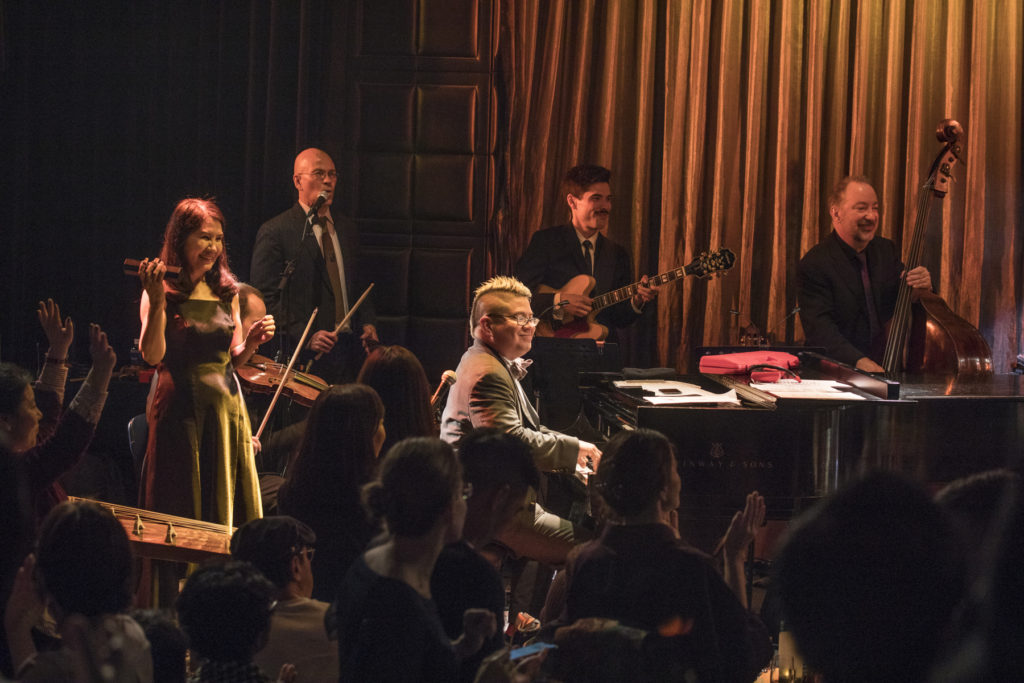 For their first ever appearance at Blue Note Tokyo, the band returned to Japan for the first time in five years. With all members standing close to each other on the stage, the performance unfurled through well-timed interactions between instruments and vocals. Right from the opening number “BOLERO,” the set was a journey around the world that included everything from classical and Latin music to jazz and pop. Singer China Forbes, who handles such different languages as English, French, German, Spanish, Japanese and Turkish in an amazingly natural manner, personifies the cosmopolitan warmth one associates with such multicultural sanctuaries as hotels or cruise ships. The band’s cover of Hiroshi Wada &Mahina Stars’ “KikuchiyoTo Mohshimasu,” an “American-style version with kotoof a song about a one-night stand with an Akasaka geisha,” was performed in a smart arrangement incorporating passages of the famous kotopiece “Rokudan no shirabe.” Timothy Nishimoto totally disarmed me with his lustrous voice that is perfect for this kind of mood music, and his Japanese is definitely getting better, too.

The climax on this evening was the appearance of Saori Yuki as a surprise guest. She performed “Ta Ya Tan,” an unknown but brilliant song that appeared on the B-side of ”Heavenly Scat,” with moist and melancholic whispers. Having been introduced to the world of songs by nursery rhymes, and subsequently trained with big bands at dance halls and cabarets, Yuki enjoyed her performance with the band as if it were a return to her roots. In the cover of ”Zundoko-Bushi,” she even showed glimpses of her comedian side that we know from her appearance in “8 Ji Dayo! ZeninShugou.” 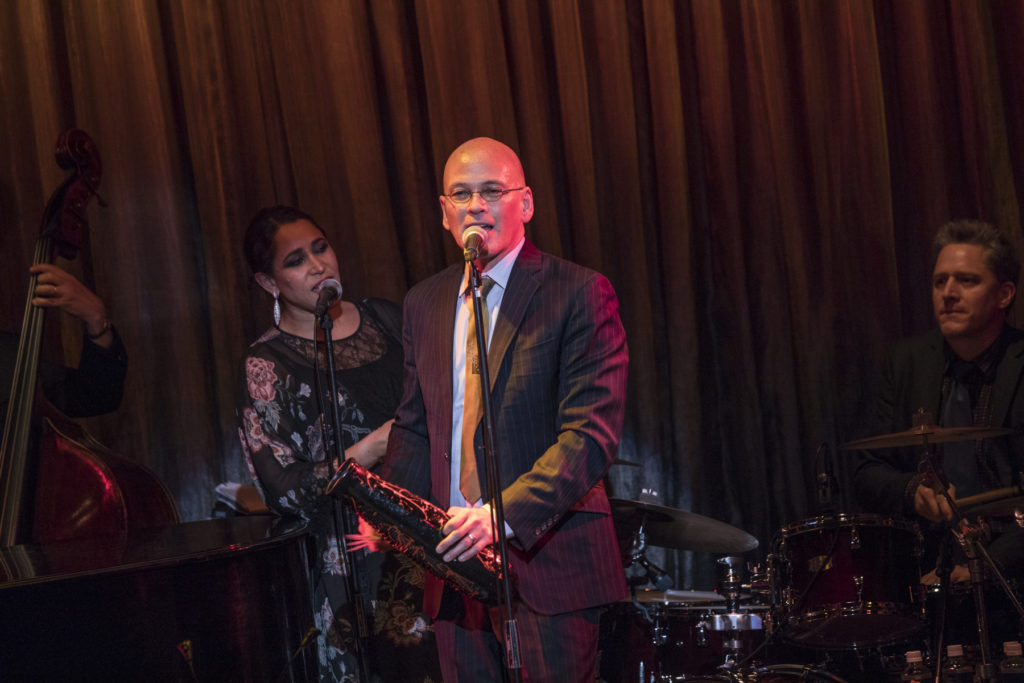 From the beginning to the encore “BRASIL,” the concert was a tour de force that wrapped the entire venue up in a sense of euphoria, and involuntarily brought a broad smile to my face. The orchestra + singer format is all about how every single performer is an irreplaceable element on the live stage; about the visually striking experience that witnessing a band having fun on stage can be; and about the feeling of elation when the audience gets carried away by the groove. Having set out from Portland to embark on their musical journey around the world, Pink Martini closed their set to standing ovations celebrating their display of the very essence of admiration for sparkling, shimmering music.