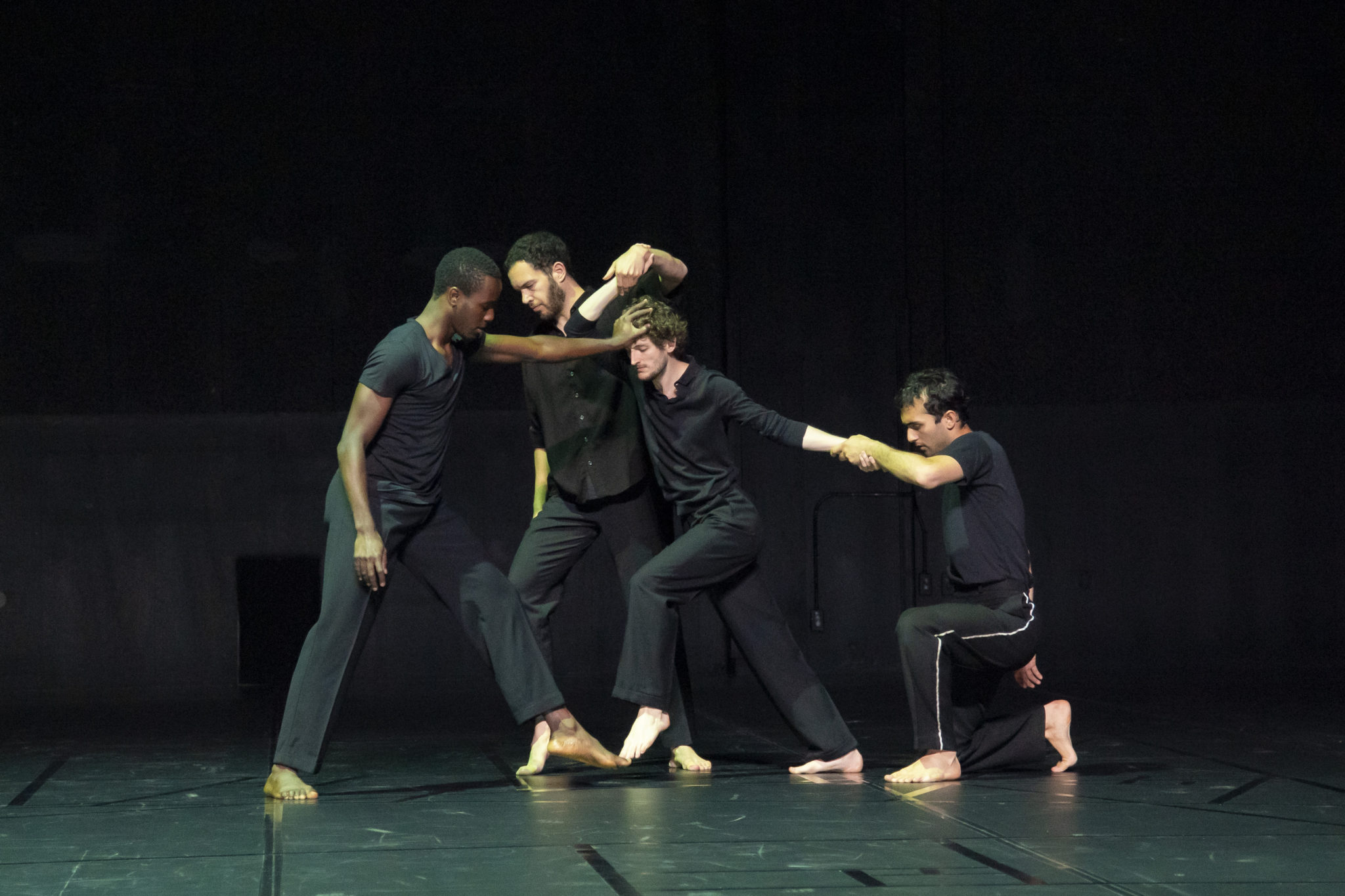 In this day and age, clichés and a sense of déjà vu are serious obstacles that all artists are forced to grapple with.

That cursed phrase “nothing’s really new anymore” has become the basic premise for all forms of expression, from film and theater to music and visual art. Just last night, I heard a new work by a contemporary musician that made me want to remark how “Reich has been doing this for ages now – where did this come from, the classics?” Nonetheless, our time continues to produce forms of expression that are new in a different way; consider the axis of a spiral staircase, which looks like a single spot when seen from above but reveals a vertical range when viewed from the side.

However, the problem lies in the genre of dance. Why? Because the body of any dancing human being consists of a head, a torso, two arms and two legs, and the joints can only move in certain ways. In other words, the expressive subject is bound by certain limitations. For this reason, the genre tends to pursue technical mastery; to discover the extent to which the human body can move in “unbelievable” ways. Classical ballet is the apex of this pursuit: so many people remain fascinated by these impossibly fit, supremely skilled dancers’ efforts to reach ever more stunning artistic heights while never stepping outside the bounds of a rigid template.

On the other hand, Butoh, which was founded by Tatsumi Hijikata and focuses on the Eastern physical sensation of shuffling one’s feet across the face of the earth; the expressionist dance movement (“Neuer Tanz”) that arose in resistance to ballet; Pina Bausch’s contributions, which inevitably evoke the place of the body within social systems; and other such forms of expression have emerged within the genre, but going beyond these developments has appeared to be quite difficult.

Many works aim at something that can be called “visible music”. These pieces entrust progress to music – an element essential to dance – which they consider the key to new forms of expression (as the stock on which to draw is enormous, seeing that there is plenty of music that nobody has danced to yet). But it’s not that easy. Unfortunately, I have often seen the freedom and abundance present in a work of music shrunk by dance, which is experienced with the eyes. Speaking of this, curation that aimed at the destruction and creation of dance (ah yes, another dogmatic art cliché) was quite popular at one point.    I remember one of those miserable lineups, which seemed to say “as long as someone gets up on stage and does something – that’s dance, right?” 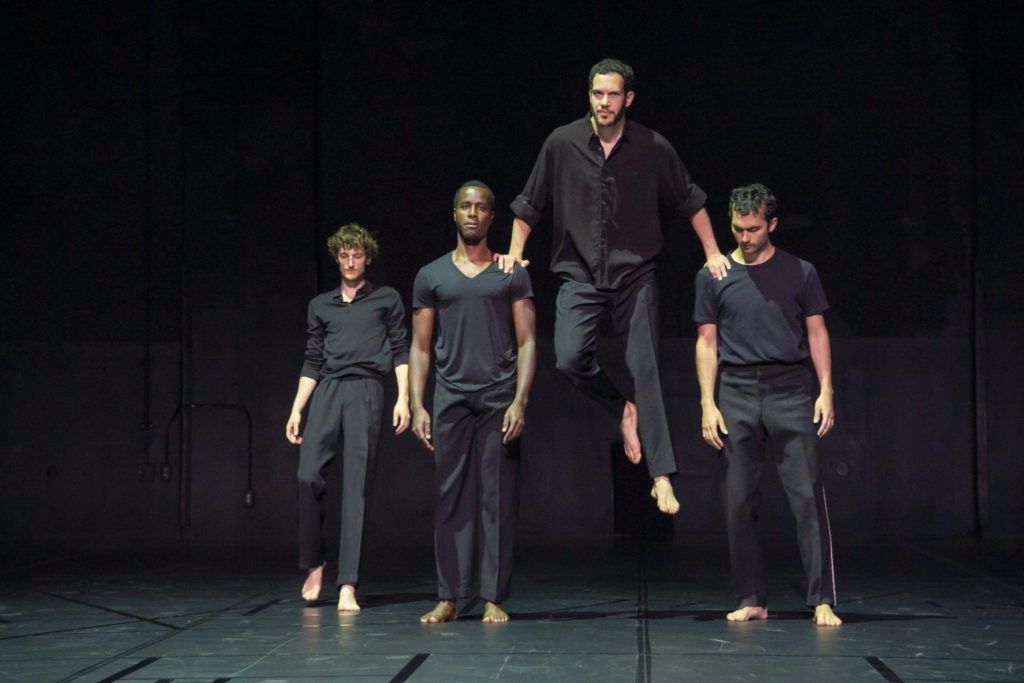 Here, Rosas performed “A Love Supreme” and “Mitten wir im Leben sind / Bach6Cellosuiten”. As if showing no fear, the former was set to a classic piece by John Coltrane, the latter to one by Bach – a terrifyingly challenging lineup. But Bach without accompaniment is still fine. That’s because, as seen in its enduring use in important movie scenes, the music is quite adaptive. To compare it to food, it is not unlike white rice, which forms the basis for many other flavors. In contrast, Coltrane’s jazz is, in every sense of the word, dangerous. Considering that improvisation in jazz revolves around “to what extent the music can free itself from the relationships and gravity present in a specific place – how free it can be”, one can easily expect the dancing itself to weigh down the music, no matter how the human body tries to wiggle. Even worse, modern jazz has a history of being used frivolously as dance music – as a light antithesis to ballet, which is based on classical music. This fact makes its artistic use lethal; I myself have only bad memories of it.

All that said, “A Love Supreme” turned out to be a superb work that far exceeded my spiteful expectations. It resisted criticism, i.e. predicted each and every pitfall that opened up the moment the decision to use Coltrane’s masterpiece was made, avoided all traps, and was realized based on a certain outstanding idea. Yes, the audience was treated to an extremely intellectual form of expression. 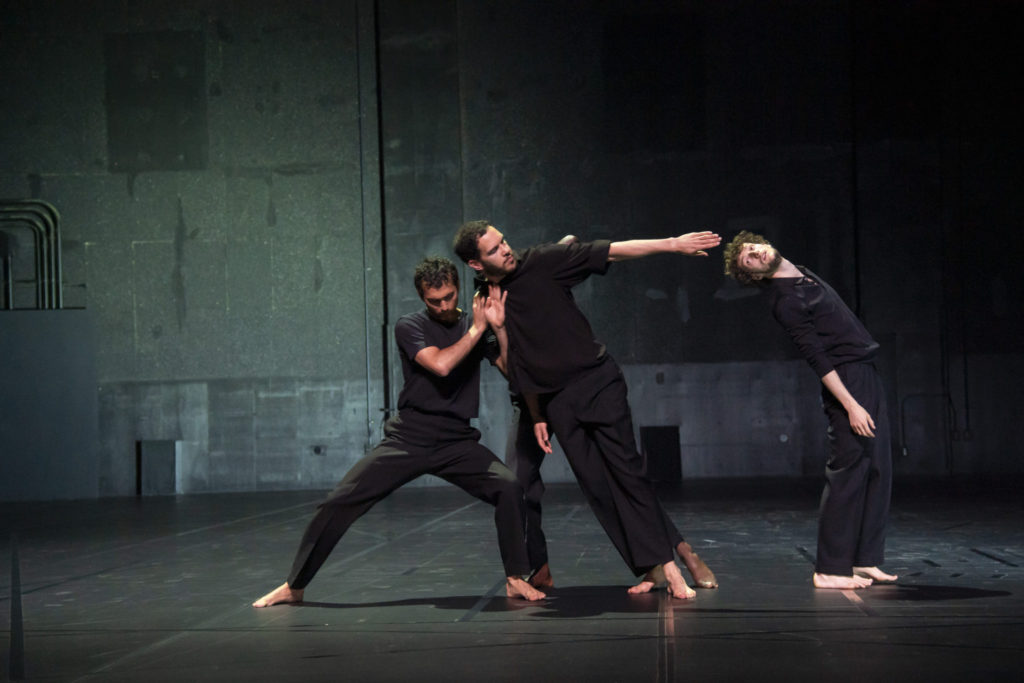 The introduction began with silence. Dancers wearing shirts and trousers moved their bodies as if they were doing gymnastics, when a choreography reminiscent of karate exercise suddenly kicked off. Seeing those bodies move in front of me for quite some time, I felt an entirely unexpected synesthesia with the dancers. They swung their bodies round and round, reached upward, and then bent down holding their chests. All those are movements that us amateurs are equally capable of performing, and all of a sudden, my mind had become one with the dancers’. Long forgotten sensations – “when I spin the world spins, that’s funny”, or “moving around is so much fun” – came to the surface from somewhere deep down within me, even eliciting an emotional response.

This can be described as a mental experience of the “earthly body” that you and I both possess. I have seen plenty of dance styled on silent and easy-going movement, but nothing has ever made me feel this as strongly before. “The essential part comes all of sudden” – actually a feature shared by the true masterpieces of classical music – is seen frequently in the work of Rosas, including in “Mitten wir im Leben sind / Bach6Cellosuiten” that followed “A Love Supreme”. 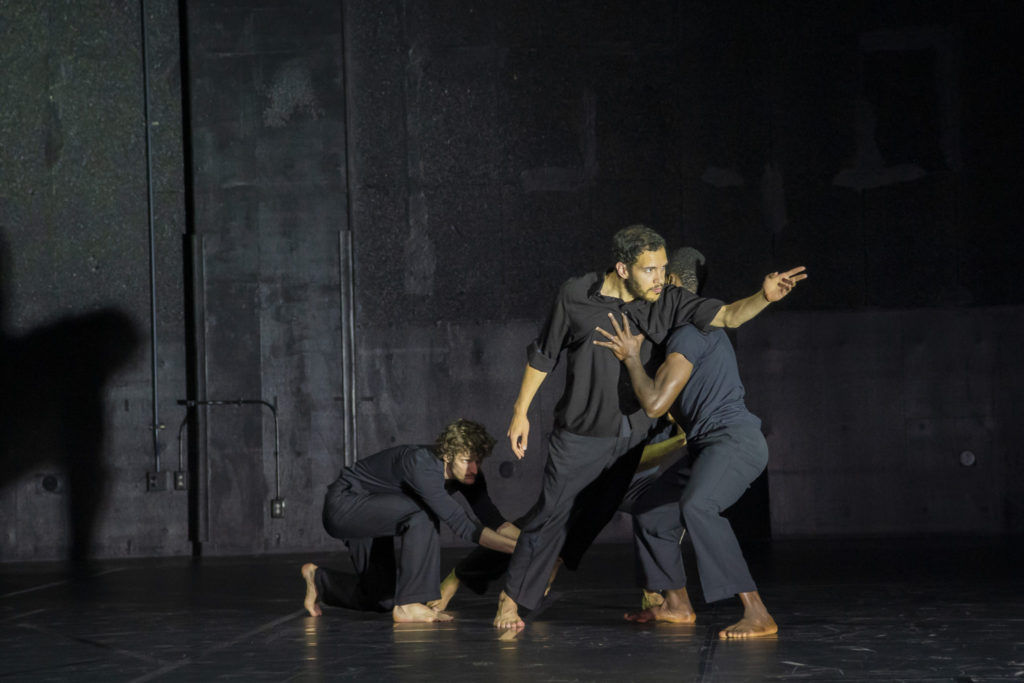 The dancing continued in silence, despite the performers on stage alternating. Out of nowhere, as a lightning strike, came a sax solo – that most memorable part of the intro to “A Love Supreme” – and the dancers started moving to the music. This very moment, the experience of a state of silence transforming into a world with music, is the essence of this piece.

Our bodies and those of the dancers had been synchronized through the long silent dance, bringing about a satisfaction with normal human happiness and joy achieved by moving our bodies in the physical world. Interruption of that by an enormous shock can be understood as something joyful, but also as a disaster for humans. I also noticed that while Coltrane’s condensed world of music is one of completely closed beauty, the dance accompanying it is, although perhaps riding on the coattails of the music to some extent, really cool – and essentially not very different from the “earthly bodies” in the silent intro. This dance always seeks out the unemotional, and is selfless in relation to the free-spirited music, running side by side with it instead of relying on it. That is, this struggle between the two is nothing less that the relationship between the eternal, sublime entity that humanity never ceases to pursue and mortal humans living out their finite lives.

While the essence of the dance does not change during the move from silence to Coltrane, I did discover one curious accent. That is the historicity present in the relationship between jazz and dance. This is a view with roots in the style of dance created mainly through musical movies by choreographers such as Bob Fosse. These forms of jazz dance share a kind of movement that derives from popular culture; a sudden look at the audience, an abrupt flamboyant pose. When a strong fabric is infused with such intelligent taste, such playfulness and complexity, a seed is planted in the hearts of the viewers, even if they do not realize it themselves. This resembles the ability of classical music, especially renowned symphonies, to win one over in the form of a general experience even if one does not understand all the details. I am a layman when it comes to dance, so a knowledgeable professional watching what I watched would probably be able to spot more subtle ideas. In that sense, Rosas performances are experiences you’ll want to have over and over again.