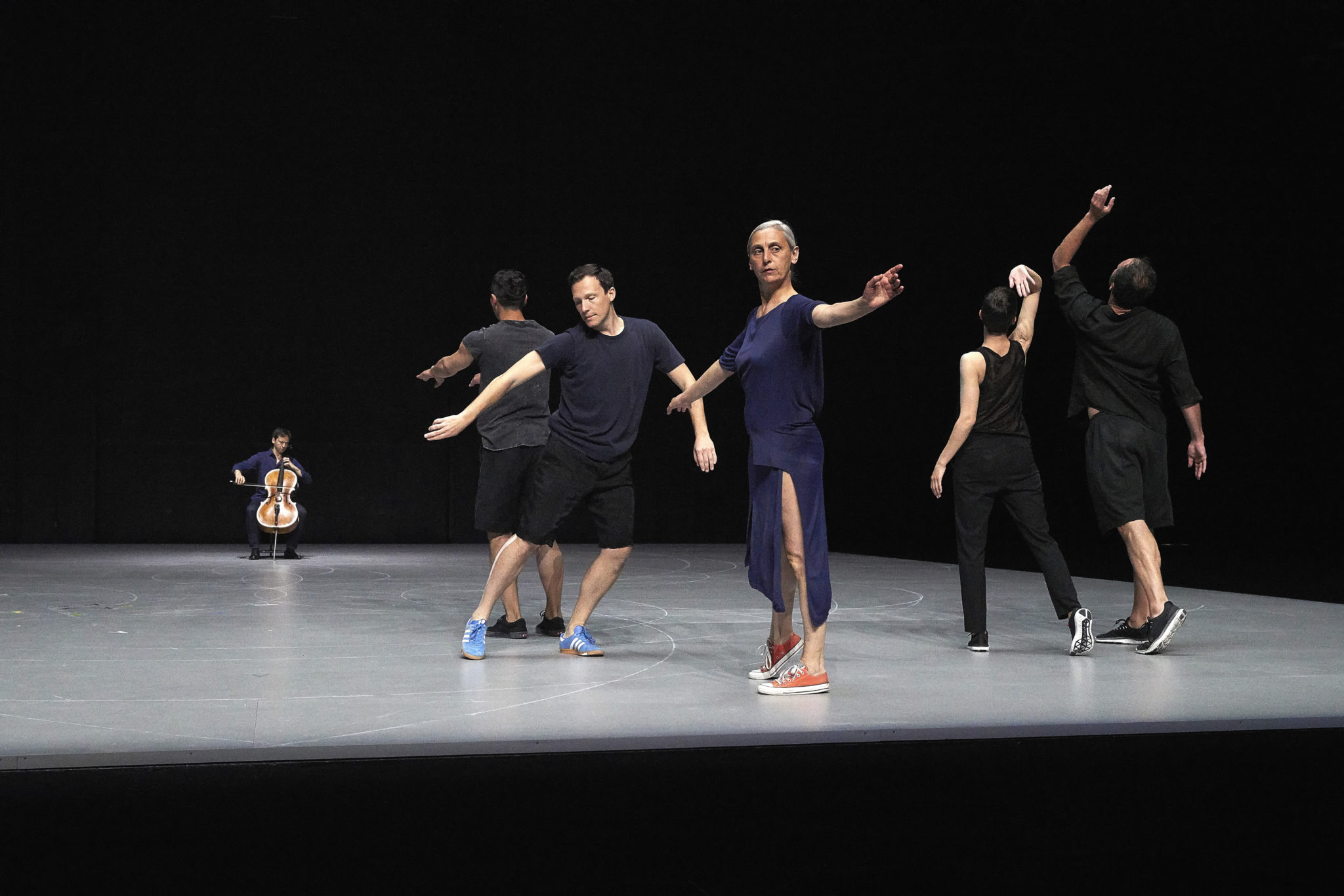 Next up was “Mitten wir im Leben sind / Bach6Cellosuiten”. On the stage, a cellist was playing with his back turned toward the audience. Each piece of music saw a different person – a man, a young woman, an old woman (Rosas founder Anne Teresa De Keersmaeker, whom I categorize based on her gray hair), and a man in the prime of his life – emerge and start dancing. Appearing here are both individual human beings and the relationships between them; a lone young man, a lone middle-aged man, an old woman with a young man, an old woman with a young woman – interactions that could be either romantic or familial.

The use of Bach, particularly in the form of an unaccompanied cello, for a theme like this is highly orthodox. As I mentioned earlier, these Bach pieces were originally created as tools that allow the listener to feel the sublime presence of God, so the level of any dance performed to them is automatically raised by the power of the music. For that reason, the careful sense of criticism in “A Love Supreme” is weaker in this second piece, which instead hangs on how deep it is possible to go and whether expectations can be exceeded when working within the framework of a cliché, namely that which is highly orthodox.

On stage, the dancers – men and women, young, middle-aged and old – expose their aged bodies as they are. They perform everything from aggressive, Muay Thai-like moves to sensual, tango-like interactions; at one point, the men form a line as if caricaturing some organization. That is an expression of a stereotype that applies to virtually all humans, and appears to reveal the essence of humans, who seek stability by playing certain roles in society. Another point of emphasis is distance. The dancers are thrown apart from each other by some centrifugal force, as if a barrier has been erected on the stage, but soon return to their positions. Perhaps this is symbolic of the limits of the human organism. For some reason, to me this movement appeared geometric, as if governed by a specific pattern. Reading the brochure for the show afterwards, I was surprised to discover that a geometric pattern had indeed been drawn on the stage for this part. (I also heard about this later, but in interviews, De Keersmaeker occasionally mentions sequences of numbers and the structure of geometry as motifs that inspire her.) 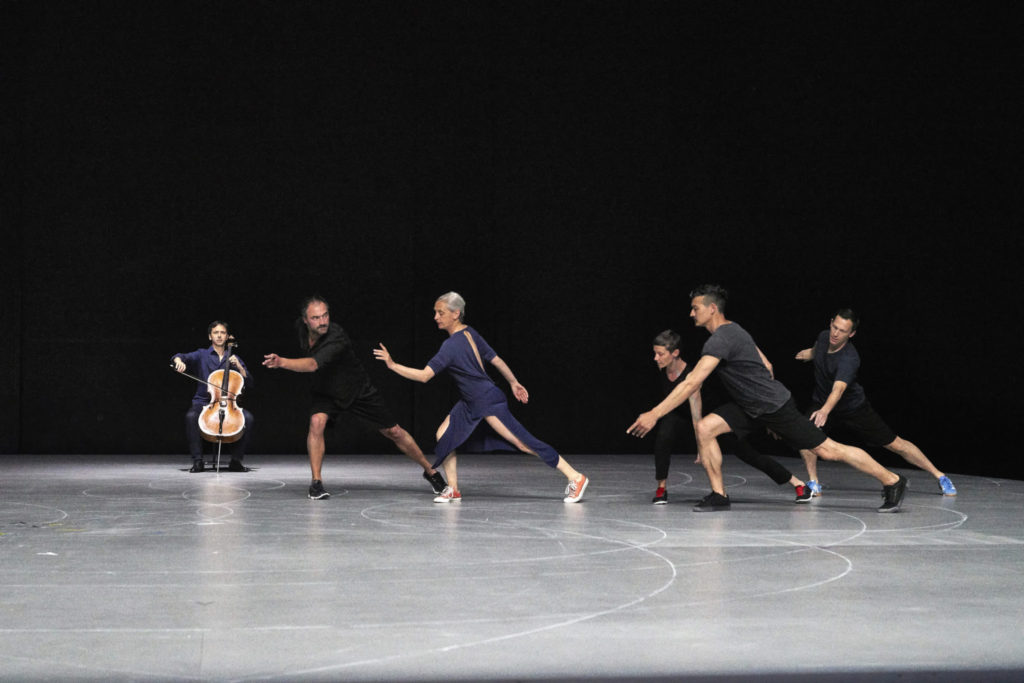 Relatedly, Bach’s music is also known for its mathematical structure, with many of the composer’s pieces containing symmetry elements such as parallel shifts and symmetric displacements. Bach is known to have been fond of using numbers that symbolize Christianity’s Holy Trinity, such as in the Goldberg Variations – a composition that comprises one set of 30 variations over three pieces of music. In “Mitten wir im Leben sind / Bach6Cellosuiten”, it was impressive to see De Keersmaeker herself standing in front of the audience, counting with her fingers to separate sequences from each other whenever a new piece of music was about to start. In this piece, Rosas emphasized humans, the relationships between them, and numbers. By the way, what music and mathematics have in common is the achievement of beauty through modeling. Highlighting the essence of something requires scraping away the unnecessary parts and pursuing a form that communicates the crux of the matter simply and in a balanced manner. This common ground between the two genres, in and of itself, can be considered synonymous with Rosas’s approach. 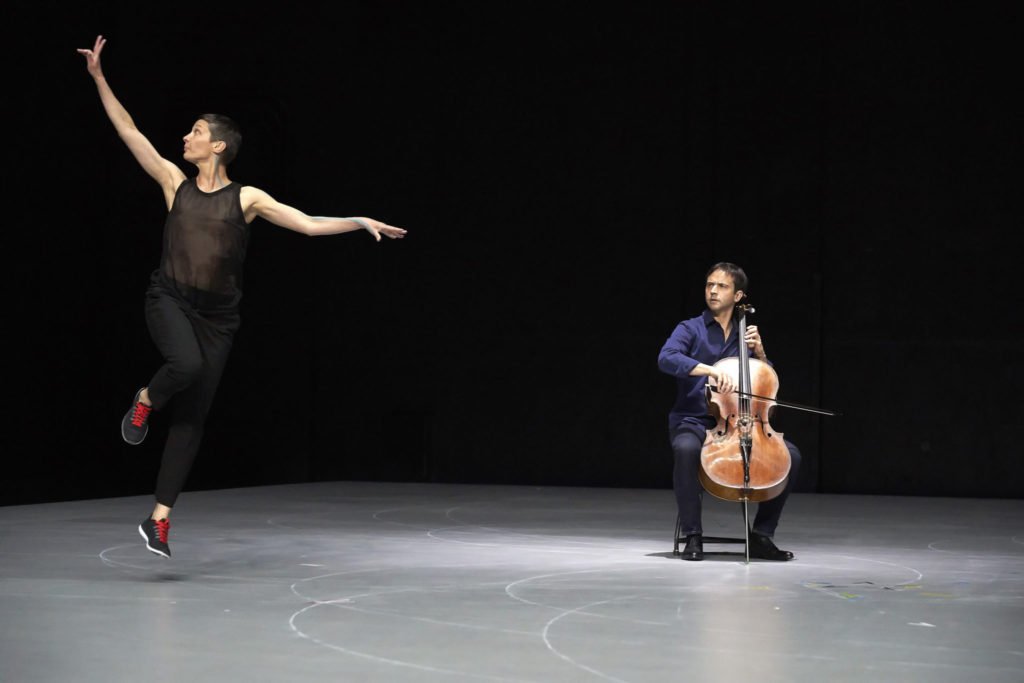 When watching “Mitten wir im Leben sind / Bach6Cellosuiten”, I was, for some reason, extremely rapidly and forcefully reminded of Hermann Hesse’s novel “Siddhartha”. In the book, the elderly protagonist, now a river ferryman, talks to his friend – a fellow ascetic who chose a different path – about how time does not exist and how the world is complete in every passing moment. In my childhood, reading this story of inexistent time and the world that is complete from one moment to the other, I was terribly moved by both those words and the story as a whole. Watching the performance, I was surprised to notice these thoughts and feelings, hidden deep within my body until now, come up to the surface. The piece truly symbolizes human life – an incredible cliché, but also a matter that no human being can ignore. We watch the dancers’ moving bodies and listen to Bach’s music, as if admiring the calligraphy on a scroll hanging on the wall of a teahouse, and pose questions about the meaning of life to ourselves. This time, this behavior, is here given the name “Mitten wir im Leben sind / Bach6Cellosuiten”.

Rosas truly is a force to be reckoned with.