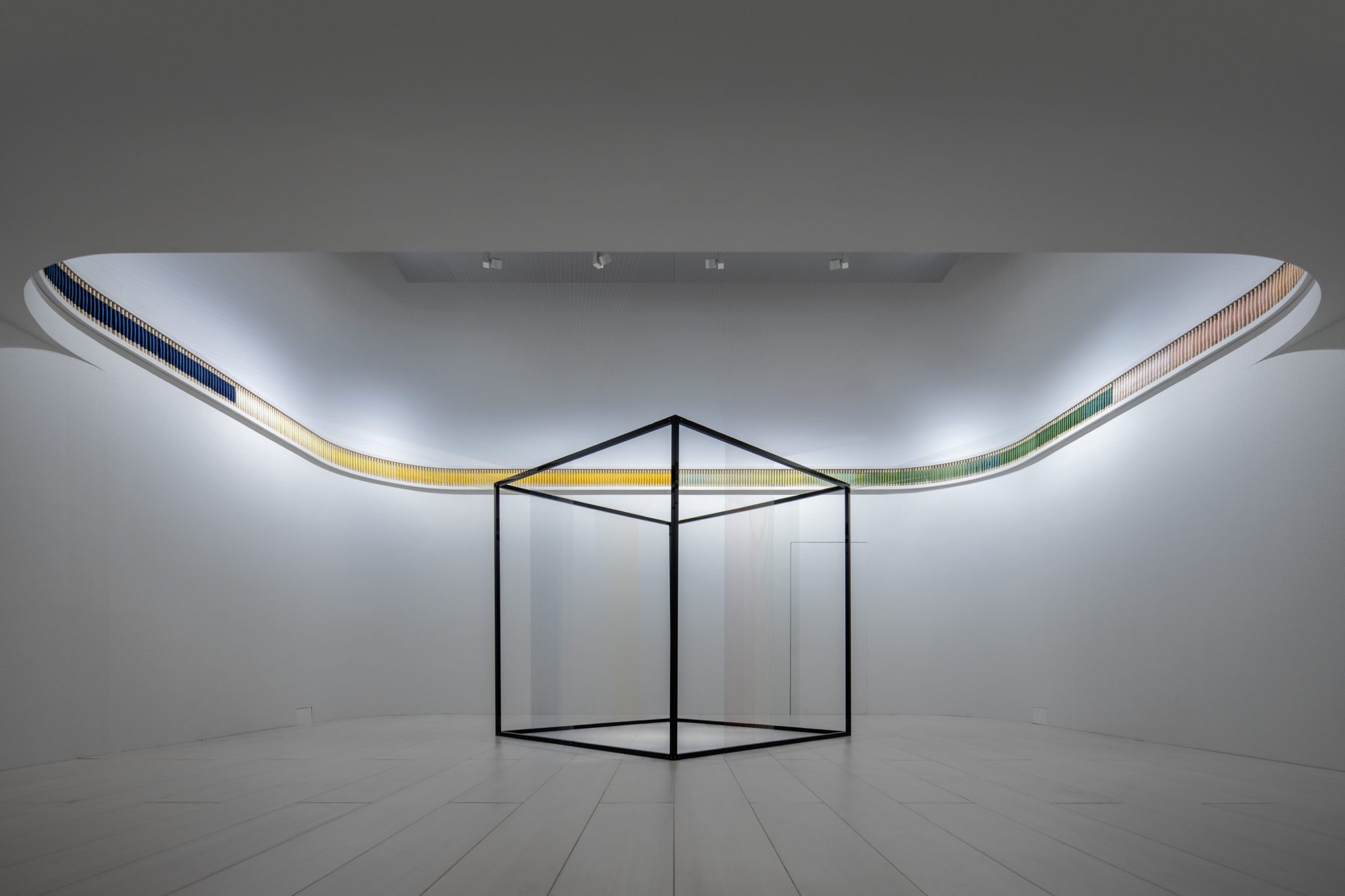 A night in spring, filled with the odor of life

What caught my eyes first upon entering the exhibition space was a cubic frame more than two meters large, with four-colored belts on its sides. The belts consisted of warp yarn put up in a perfectly straight fashion, and could easily be mistaken for rays of light. Pulled from about 800 reels that were methodically lined up along the walls of the elliptically shaped space, the threads were individually dyed in subtly varying colors, to create a beautiful gradation effect.
Taking a look around the venue, I noticed flowers arranged on a total of four white exhibition stands. Camellia, convolvulus, spiderwort and chrysanthemum ? one representing each season ? were displayed alongside bottles of Shiseido cosmetics, whereas their shadows created stark contrasts on the white surfaces.

For the “Shiki no iro” exhibition themed on the beauty of the four seasons in Japan, The Ginza Space invited two (groups of) artists whose work has been revolving around on plants. Fukumi Shimura, a vegetable dyeing artist and living national treasure, and her daughter Yoko, a dyeing artist like her mother, together created “Hikari no chashitsu”(“tea room of light”) out of threads dyed using madder, indigo and seasonal wild grass among others, and exhibited the work in the form of an installation that made full use of the venue’s open ceiling. Yoshihiro Suda, who is known for elaborately sculpting objects in the shapes of plants, contributed four wooden sculptures based around the colors white, blue and green, presented in an ikebana style to add a sense of tension.
This was not the first time that Suda worked with the Shimuras. In the “lifescape” exhibition at Shiseido Gallery in 2014, which was curated by Suda, they showed “Kei,” an installation based on threads that served as a prototype of sorts for the work they unveiled this time. Perfectly embodying her idea that “the colors of threads are the most beautiful before they are woven into cloths,” the original installation is one of Fukumi Shimura’s most well-known works. It later traveled to venues such as the National Museum of Modern Art, Kyoto, and the Setagaya Art Museum, where it was shown using different colors as part of Shimura’s retrospective exhibition “Boro e no kaiki.” Six years after making “Kei,” the three artists had gotten together once again at Ginza, Tokyo. 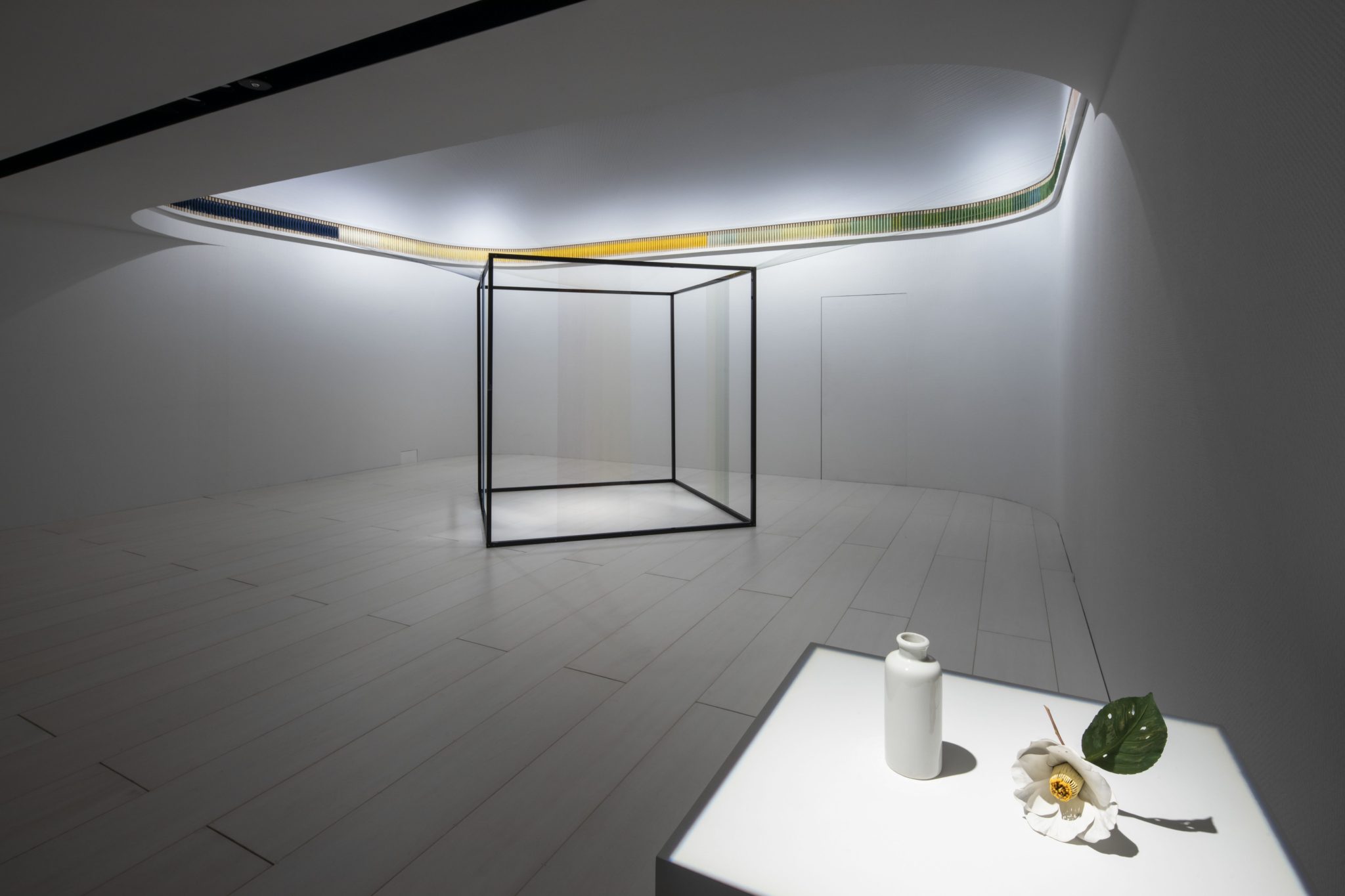 In the tranquil environment shared by works that take their colors and shapes from nature, Megumi Nakamura did a one-off dance performance when spring was around the corner in late February.
Dressed all in black, Nakamura slowly approached, and ultimately stood face to face with the Shimura’s’ work. With restrained movements and often downcast eyes, the performance was charged with a strong attractive force to take the audience in. Threads, and fingers moving as if tieing them together ? the airiness in these elements is exactly what the term yugen (mysterious and profound) refers to.
Having worked with such renowned European dance companies as the Nederlands Dans Theater, since her return to Japan in 2007, Nakamura has been putting effort into her creative and educational endeavors, as well as genre-crossing collaborations. Her performance combines a dignified kind of charm, quiet passion, and an amount of strength that seems to be increasing with age. Dancing to monophonic music, from unaccompanied singing reminiscent of Gregorian chant, to instrumental music, here she delivered a piece into which she didn’t cram too much, but left some spaces unfilled instead. The resonance she created that way suggested that her art has indeed attained perfection.
I was especially impressed by the movements of her arms that, every now and then, stretched out horizontally in an almost piercing manner. The gestures resembling very much those of threading weft yarn, reminded me of Fukumi Shimura’s statement likening warp threads to space, tradition and contemplation, and weft threads to time, the present and emotion. *1 The three-dimensional works of Fukumi and Yoko Shimura and Yoshihiro Suda, with their fleeting colors and shapes, constantly in transition and ready to cross over to the other side any second, instantly shone brighter once they mingled with the temporal art form of dance. Just like flower buds that open, they began to spill over with the natural life they had been harboring inside.

After steadily walking around the frame while making sounds with her shoes while making noises with her shoes, Nakamura eventually entered the “tea house” that the frame supposedly represented. Within the limited space inside, she continued to dance while stretching her limbs as if bathing in light, and looking up to the sky. Red, blue, yellow, green and white ? all colors that surrounded her seemed to get absorbed by the black of the dancer, and provide energy to spin around. In that moment, the dancer’s body loosened up as if being released from its strain.
When she stepped out of the frame again, Nakamura’s appearance had changed completely. Accompanied by the sound of her breathing, her relaxed movements now seemed as light as those of a petal dancing in the wind.
After moving around the frame in a counter-clockwise direction as if to turn back time, the dancer eventually disappeared from the stage with her back to the audience. When turning around to watch the dancer leave the venue, the spectators once again notice the sculpted flowers. Even though they had been out of sight, these flowers were definitely connected to the dance while nobly blossoming behind the people’s backs.

One week after Megumi Nakamura’s performance, Tatsunori Kongo, the young headmaster of the Kongo school of Noh, was supposed to appear in a Noh piece. What was going to be a performance of playwright Michiko Ishimure’s posthumous New Noh piece “Okinomiya,” with costumes by Fukumi Shimura, and the up-and-coming Noh player in the role of the protagonist Shiro Amakusa, unfortunately had to be canceled due to the current pandemic.
Nine years on from the Great East Japan Earthquake and the nuclear accident that partly inspired “Okinomiya,” the world is facing another unprecedented disaster.

Considering the present situation of countless theaters and art museums that have closed their doors with no prospect as to when they will reopen, the performance on that evening was a truly miraculous event. The dream in that spring night was short and momentary, but the “flowers” certainly work as lights that continue to burn in the hearts of everyone who saw them at the show.