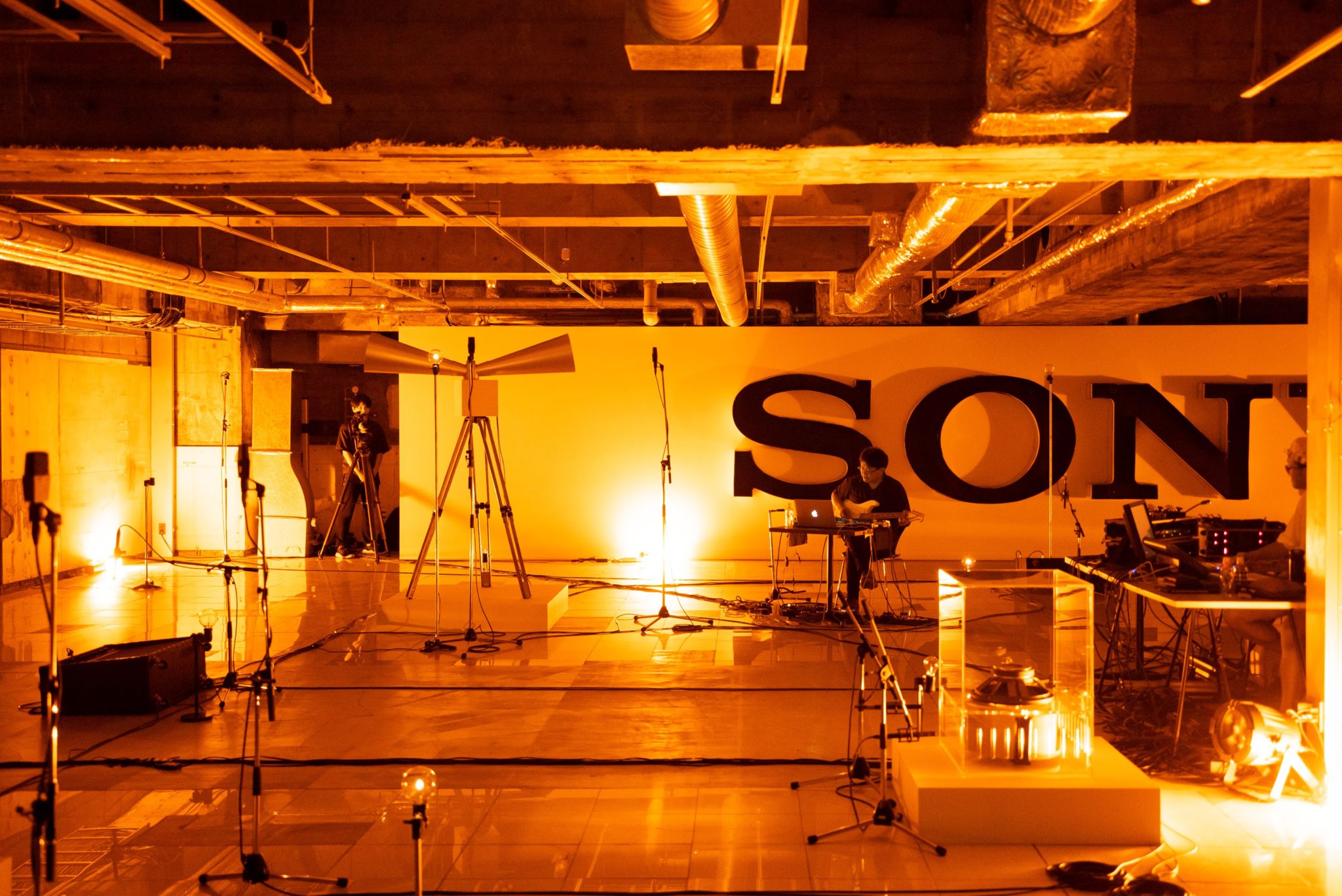 Next to exit B9 under the streets of Ginza, where the Marunouchi and Ginza subway lines meet and countless people usually pass by every day, was a special entrance through which only a select few were let into the subterranean part of Ginza Sony Park – two floors of which on this day played host to Yuko Mohri’s program “SP. by yuko mohri.”

Here and there on the upper floor, where the lights were turned down low, stood giant sound sculptures equipped with rotating megaphones. The sculptures were entitled “You Locked Me Up in a Grave, You Owe Me at Least the Peace of a Grave” – a quote from the 19th-century French revolutionary Louis Auguste Blanqui, who spent many long years imprisoned for his activities. On the brightly lit lower floor, on the other hand, stood only a single MIDI piano. This instrument was outfitted with microphones connected to a computer, catching sounds from the room that the piano keys would then react to.

The onlookers gathered at Ginza Sony Park were all wearing face masks, as were the event staff charged with mixing, programming, and filming. Exchanging few words and keeping movement to a minimum, their preparations proceeded matter-of-factly. Instead of “Stay Home,” the title “SP.” refers to “Stay [in the] Park,” as well as to “Sound in Progress,” a reference to studio work. As the performance was about to begin, the shutters that had been kept open to ventilate the space were closed for a moment to keep the sound in. Movement was also restricted to prevent any interference with the recording, so the audience was locked inside the room for almost an hour – mirroring all of us who have been confined to our homes during the Covid-19 pandemic. 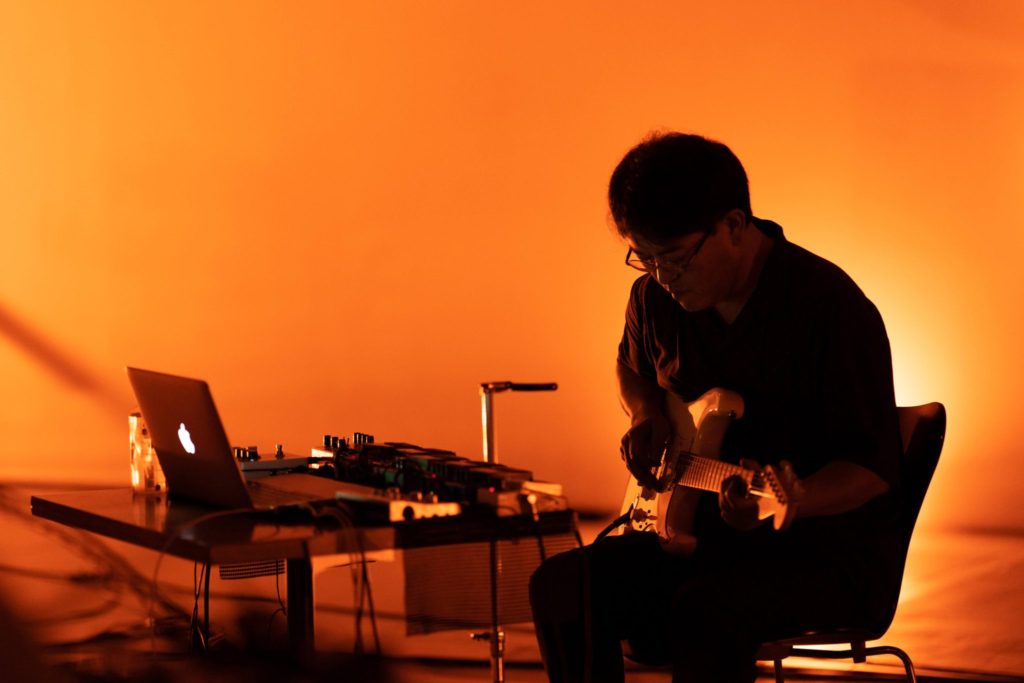 The first session, on the upper floor, featured Seiichi Yamamoto. Surrounded by the sound sculptures, Yamamoto played as if balancing his own sounds with the swells of those emitted by the sculptures, playing each phrase, listening, and then playing again. This eventually produced a soundscape based on feedback; one that exhibited both spatial and temporal change. ZAK, who was in charge of mixing the sound, also played an important role. The rotating sound sculptures brought about a dynamic site of sound, in which the sound one hears depends on where within the space one stands. In order to relay and record a sound site such as this, instead of directly extracting pure sound from a line, ZAK had placed microphones throughout the venue and mixed down the sound while being attentive to changes relayed to him through his headphones. Those who tuned in to the live stream on August 8 were listening not only to Yamamoto’s playing but also to ZAK’s mixing, which involved the live conversion of multiple channels of microphones to a single stereo track. 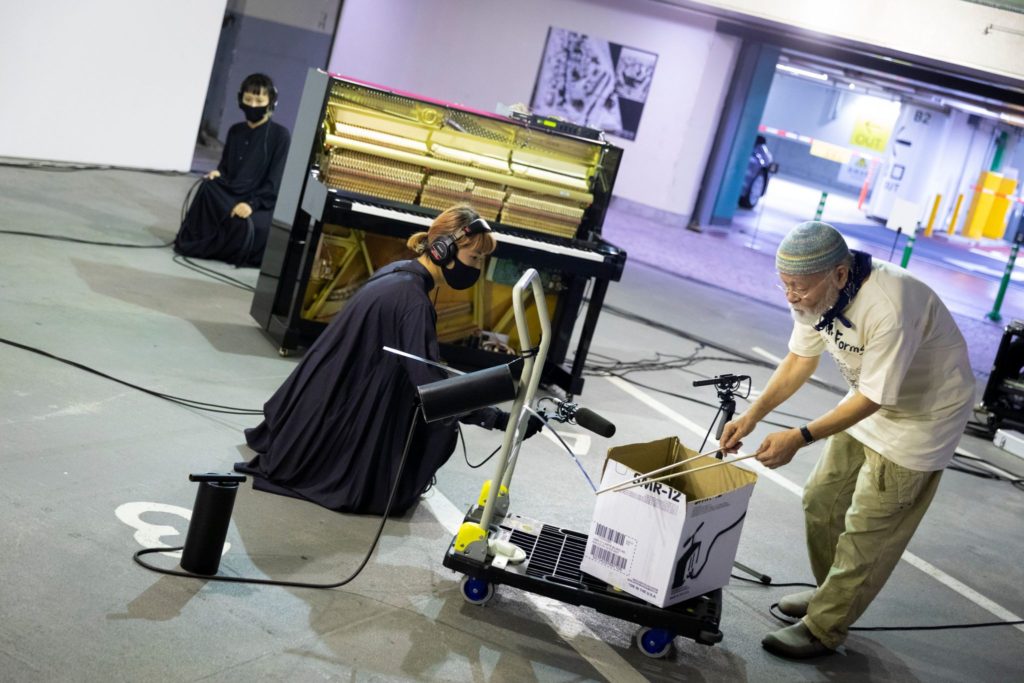 The second session saw Akio Suzuki perform on the lower Park B3 floor. The MIDI piano mentioned above was programmed to respond to sounds nearby, but rather than simply picking up the pitch of sounds, it apparently picked up sound spectrums. The rolling of a small object would be followed by a clear single-note melody, while a rubbing sound would result in several keys sounding off at once, as if responding to a lush overtone. Rather than playing in the usual sense of the word, Suzuki walked about touching the various objects scattered throughout the space, as if letting the sounds gathered within them free. A sound rich in overtones would press down about a dozen keys at once, as if objects – not humans – were grappling in front of the unmanned piano. Yuko Mohri herself was holding a microphone, catching the sounds Suzuki made as he moved around. This active mic movement added a sense of cheer to the session, giving it a quality that differed from that of the other two. 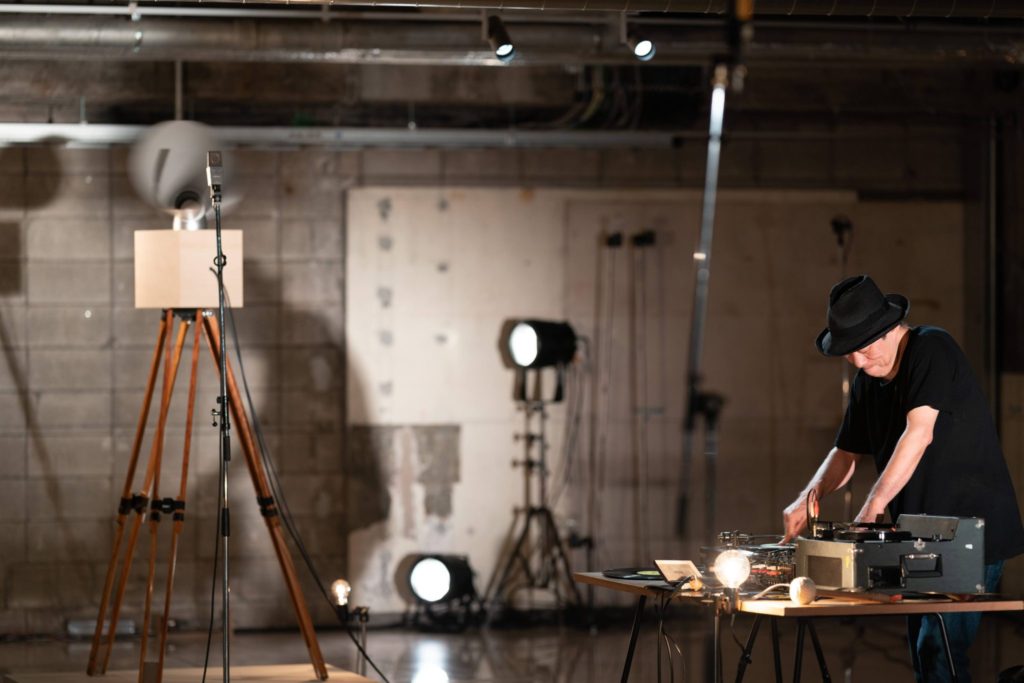 In the third session, Yoshihide Otomo took on a turntable on the floor with the sound sculptures. Lowering the needle, then rubbing and beating his record of choice in various ways, Otomo produced not single notes but the sort of recurring sounds that can only be achieved through rotation of the turntable. These sounds were joined by the movement of the pre-programmed, mercilessly rotating sound sculptures. The sounds from the record, cut off over and over as Otomo did his thing, were distributed further to the four sound sculptures, which all made different sounds according to their rotation. Rotations were rotated, and repetitions became distant before closing in. The giant megaphones gradually seemed to come alive.

When a certain continuous sound was being emitted, I moved my head ever so slightly and was surprised to notice that the sound I was hearing changed dramatically. The moiré pattern of the sound produced by the sound sculptures’ megaphones, each rotating at its own pace, was completely different when heard from only a slightly different angle. After making this discovery, I kept listening intently, but could not help also imagining the many other sounds that I wasn’t hearing due to my position in the room and the angle of my head. My friend listening right by me, and those streaming the event somewhere else, were hearing a sound similar to, but entirely different from, the one I was hearing. We are all confined right now, but each one of us experiences that confinement differently.

While imprisoned at the Château du Taureau, Blanqui wrote an idiosyncratic cosmological manifesto entitled “The Eternity According to the Stars.” Penned by a man separated from his comrades, locked in a dungeon, and left to wither away, the book theorizes that there are countless versions of our world out there in space. Human life exists in innumerable variants isolated from each other and scattered throughout the universe, each with their own destinies. Blanqui’s vision of the universe is compatible with the sense of space expounded by “SP.,” in which numerous different ways of listening exist in isolated places within the same space.

In “The Eternity,” Blanqui also theorizes extensively on comets – mysterious celestial bodies whose orbits are completely different from those of planets and which begin to shrink just as their tails seem the longest. During his lengthy imprisonment, Blanqui dreamed about millions of isolated iterations of Earth out in space, but could not help being fascinated by comets, whose unexpected orbits often take them very close to our planet. The sound emitted by a rotating sculpture passes; we need comets in this life, too.

Born in Hyogo Prefecture in 1960, Hiromichi Hosoma is a professor at the Faculty of Letters, Arts and Sciences at Waseda University. His research into everyday voice and body movements is combined with an interest in audiovisual culture. He has authored several books, including “Idatenbanashi” (“Idaten Stories”), “Kyo no Ama-chan kara” (“From Today’s ‘Ama-chan’”), both published by Kawade Shobo; “Elan Nyumon” (“Introduction to Elan”) by Hitsuji Shobo; “Futatsu no Kono Sekai no Katasumi ni” (“Two ‘In This Corner of the World’s”), “Ehagaki no Jidai” (“The Age of Postcards”), “Asakusa Junikai” (“Asakusa Twelve-stories”), all by Seidosha; “Kaigo suru karada” (“The Caring Body”) by Igaku-Shoin; “Uta no shikumi” (“How Songs Work”) by Pia; “Mickey wa naze kuchibue wo fukuka” (“Why Does Mickey Whistle?”) by Shincho Sensho; and “Ehagaki no naka no Hikone” (“Hikone in Postcards”).