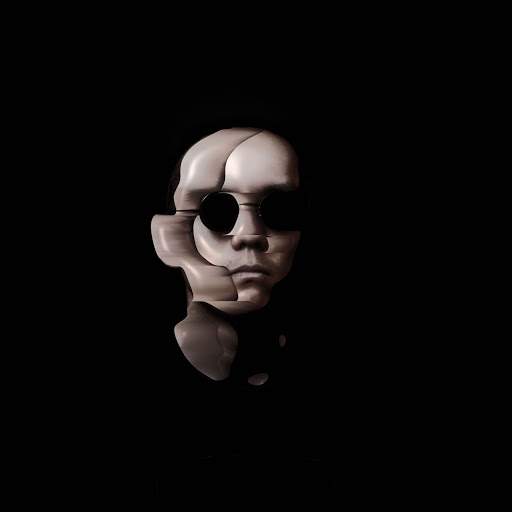 The thrilling thing about Sugai Ken’s music is how this artist’s encounter with hip hop led him to sample-based tunes and a search for new methods – a search that involved inserting his Japanese identity into the musicality of sampling, and eventually led him to a style that brings to mind the works of musique concrète created by contemporary composers such as Joji Yuasa and Toshiro Mayuzumi back in the 1950s and ’60s.

Sugai has also established what can be called his own musical etiquette – something that can be experienced at his live shows, which stimulate both the ears and the eyes. When Sugai’s music and this etiquette come together as one, an entirety beyond that perceivable from a recording alone is revealed. Hearing sounds and visualizing landscapes that seem familiar but aren’t, the audience is immersed completely into the artist’s world.

I’ve seen Sugai perform several times before, at venues such as Roppongi’s SuperDeluxe as well as at open-air festivals, but he was in particularly impressive form on February 8, 2020, when an event commemorating the Japan tour of Berlin-based musician Andrew Pekler took place at Ochiai Soup.

That event space, run by electronic musician Nobuki Nishiyama, often hosts drone, noise, and techno artists, with the acoustics calibrated to meet the needs of those genres. Soup, where exactly the right amount of clear sound fills the space during gigs, is also highly compatible with Sugai’s music, in which delicate and dynamic sounds are interspersed on a broad scale.

The show kicked off with raging noise reverberations, which gradually mellowed to be joined by various concrete sounds: modulated vocals, the calls of insects, the sound of things brushing up against each other. Sugai’s set was built around a handful of compositions, including previously released ones such as “Tsukuda,” “Genkyo,” and “Bantotenmoku,” but could be appreciated as a single, seamless piece of music. Changes in tempo were employed skillfully to develop the piece from key points of high tension toward an eventual catharsis.

Reviewers often describe Sugai’s music as “animist.” This is likely due to the artist’s effective use of sounds like sho reedpipes (what’s actually “electronic sho”), wooden clappers, and other Japanese instruments to bring about what is supposedly a Shinto-esque ambience. Watching Sugai play live, however, makes it clear that the aforementioned instruments are complementary rather than central to his music.

The “etiquette” I mentioned above literally refers to how Sugai moves during his shows. For example, he makes extremely effective and dramatic use of a small lamp meant to illuminate his hands while performing. Rather than simply switching the lamp off during calmer passages and lighting it when turning up the heat, he employs unique timing to control the darkness in a suggestive manner. For the viewer, watching this feels like a gradual descent into a slow cycle of meditation and awakening.

Most artists who use laptops during their shows tend to stare at their screens throughout, but Sugai’s performances have a distinct flow to them: when not busy manipulating the lamp, he turns to a microphone to play a bird flute or deer whistle, or wanders through the audience with a handheld gong. Unlike the impulsive performances of rock groups, Sugai’s movements are all imbued with meaning; they seem ritualistic, as if dictated by a determined form. Nonetheless, both his music and movements are irregular, so seeing and hearing them in parts make them appear entirely improvised.

A particularly noteworthy element used throughout the February show was a sampled voice that kept repeating the words sakui (“intentional”) and musakui (“unintentional”). Sugai himself notes that he has been using the voice for a long time because it expresses a theme that’s very important to him. Indeed, his music seems to levitate in between the intentional and the unintentional. The multifarious concrete sounds it incorporates echo lyrically at times and extremely tensely at others. Luigi Russolo, the pioneer of “the art of noises” that formed the foundation for musique concrète, advocated finding beauty and enjoyment in the noises of the city. Sugai’s music can be considered faithful to that tradition.

Sugai has been rumored to create and use new field recordings for every performance – something he confirmed when interviewed: “Every day before a show, I make a point of recording ritual prayers related to the shrine considered the guardian of the venue in question,” he says. “I hope to relay to the audience a sense of time and place, which is often missing from electronic music gigs.” This attention to detail, or entertainer’s mindset, helps make every Sugai gig an “incident” of sorts and prevents the audience from getting bored.

Sugai’s reason for committing to musique concrète also stands on his own interpretation of the concept.

“My point of view might sound clumsy, but I think the reason you fail when trying to make Japanese music with an orthodox electronic approach isn’t a notational one that has to do with some equal temperament,” he says. “If Western electronic music, music in which you’re trying to even numbers, is about synthesizing waveforms – essentially simulation – I feel like musique concrète, which is its ‘ancestor,’ has a certain affinity with the deep parts of traditional Japanese music. For me, what I’m doing is close to creating resemblances. I’m more comfortable with the forms of expression that emerge when recordings, used as material, perform functions different from those they were originally intended for. Having started with sampling hip hop, I feel like I’ve finally come full circle.”

Although his European tour, planned for May, had to be postponed due to the ongoing Covid-19 coronavirus pandemic, the multi-talented Sugai has kept busy with his creative activities. While no show dates have been set for Japan either, do keep an eye out for announcements: clearly different from your average underground electronic music gig, Sugai’s is a show well worth experiencing.