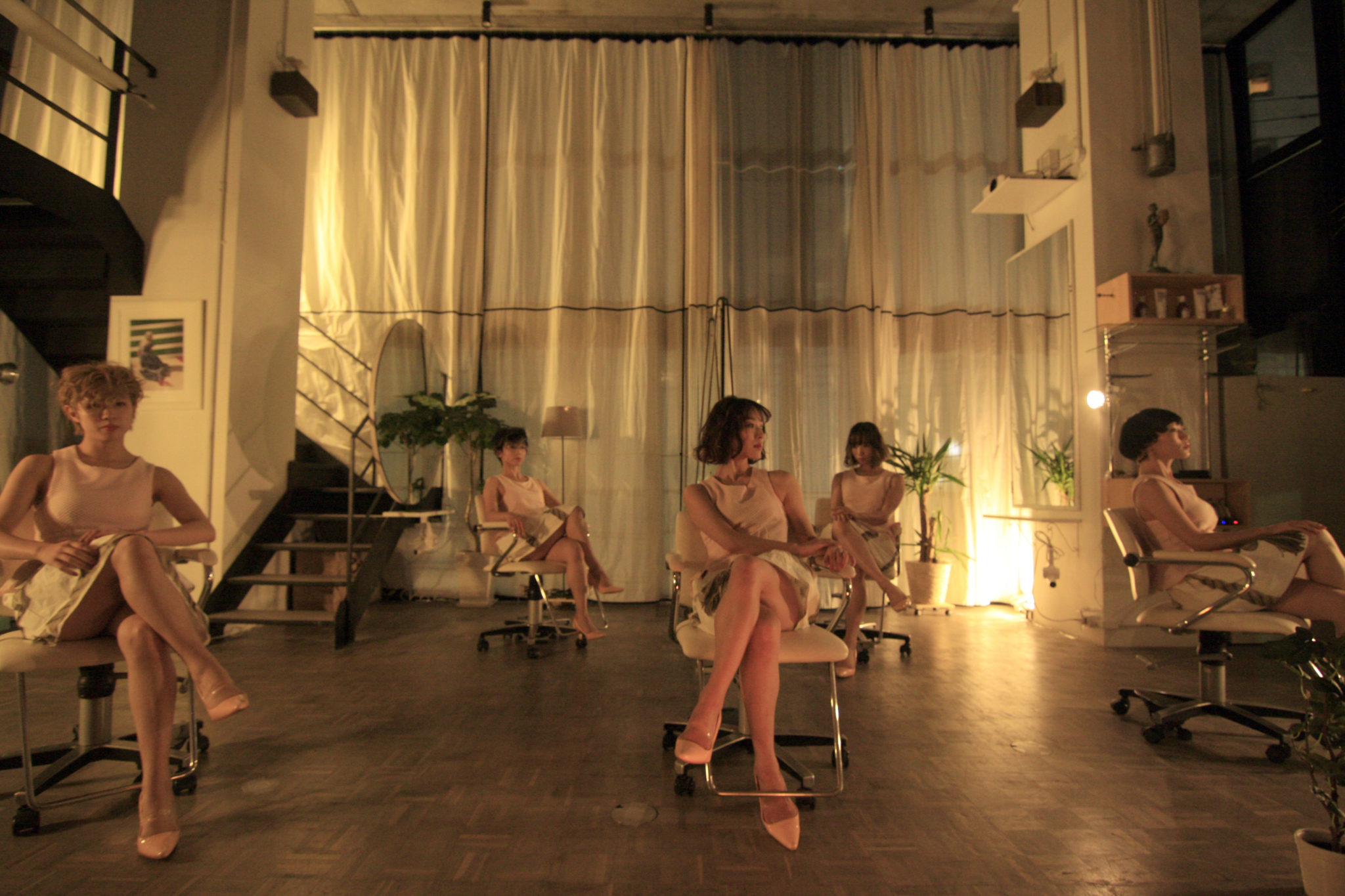 The all-female company The Bambiest has been occupying a unique position in the realm of dance for several years now. First of all, what distinguishes their performances from others is that they do not take place in commercial event halls. Their pieces are staged at schools, art galleries, shops, museum courtyards, or any other kind of place that doesn’t fit into the common idea of a “dance venue.” Choreographer Imari Suganuma constructs her performances while utilizing spatial arrangements and raisons d’etre that are specific to each respective venue. If a commercial event hall is a bland kind of “space” that makes visitors focus on what happens on the stage, performances by The Bambiest are occasions at which viewers are constantly being made aware of their own situation, so Suganuma’s choreographic work may be described as “situational haute couture” of sorts. Crammed into tiny spaces that are anything but comfortable, the company’s limited audiences are generally very overseeable, almost intimate groups of people who “witness” rather than “watch” the troupe’s dance. 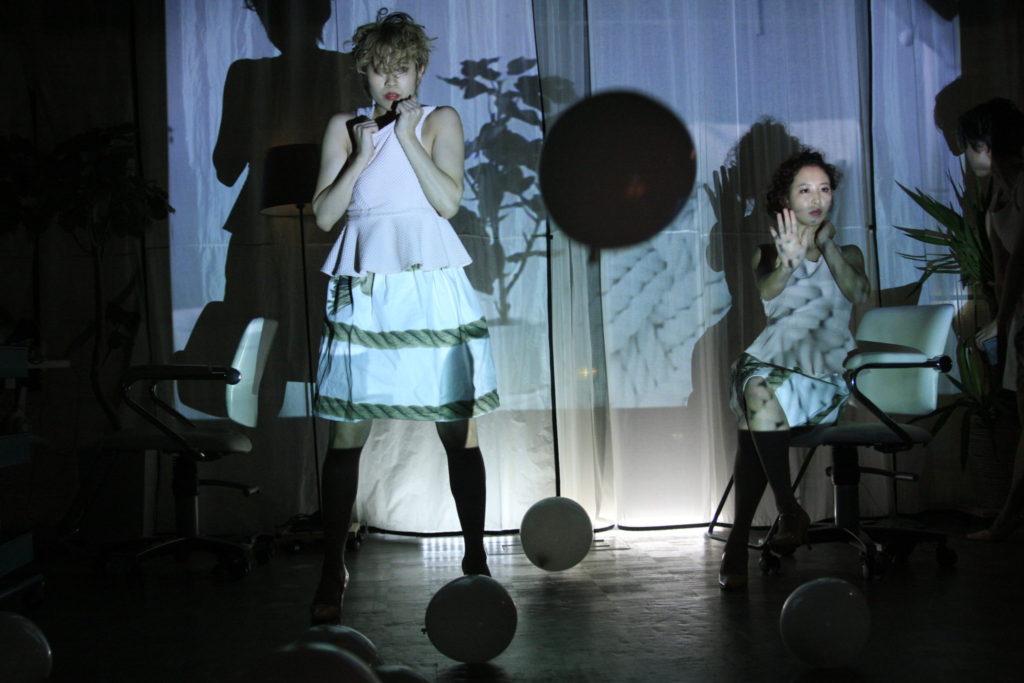 The stage for this time’s performance was the 2F space of a hair salon in Jingumae. When I arrived at the place, I found the area in front of the building crowded with people. They were watching the dancers as they slowly moved from one pose to the next like shop window dummies behind the windows on the second floor. Puzzled passersby were getting out their smartphones to take photos of the odd performance that had already set sparks flying across the Harajuku neighborhood.

Once I had passed the reception desk and got to my seat in the makeshift “auditorium,” I felt as if being at the hairdresser’s, about to sit and wait to get my hair cut. After all, the place was complete with mirrors and hair dryers, and what I witnessed was exactly the moment he hair salon as an extraordinary environment within ordinary daily life made its transition into a dance stage. Then the beautiful dancers with perfectly sculpted hairstyles appeared, playing stylish customers who came for a hairdo, while others slipped into the roles of hairdressers who watered the plants and did other preparations before opening their shop. 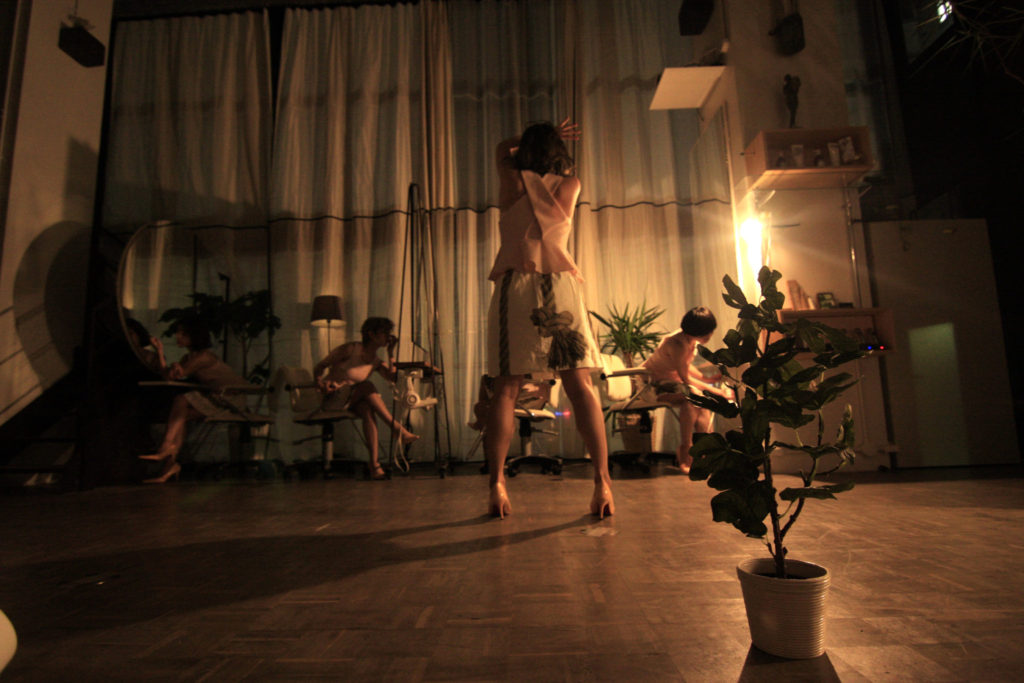 With movements that looked like “efforts to slip past each other” rather than dance, in a space so narrow that they could hardly even move at all, the six female dancers in their pink pin heel shoes mimicked the actions that take place here every day, at times in a caricaturing fashion. It wasn’t the “purification of energy andmotion” that we know as a characteristic of typical contemporary dance. More like a form of entertainment that rouses people’s dreams and ambitions with a mixture of fashion, imagery and music, the performance was strongly reminiscent of Imari Suganuma’s recent choreographic work for the Takarazuka revue and other popular stage entertainment. So what exactly is it that only just keeps The Bambiest within the boundaries of the contemporary? To me, it seems to be related to that constantly challenging mindset that has been inspiring Suganuma’s extemporaneous, guerilla style street battles, along with her fashion consciousness that is always sensitive to the currents of the times.