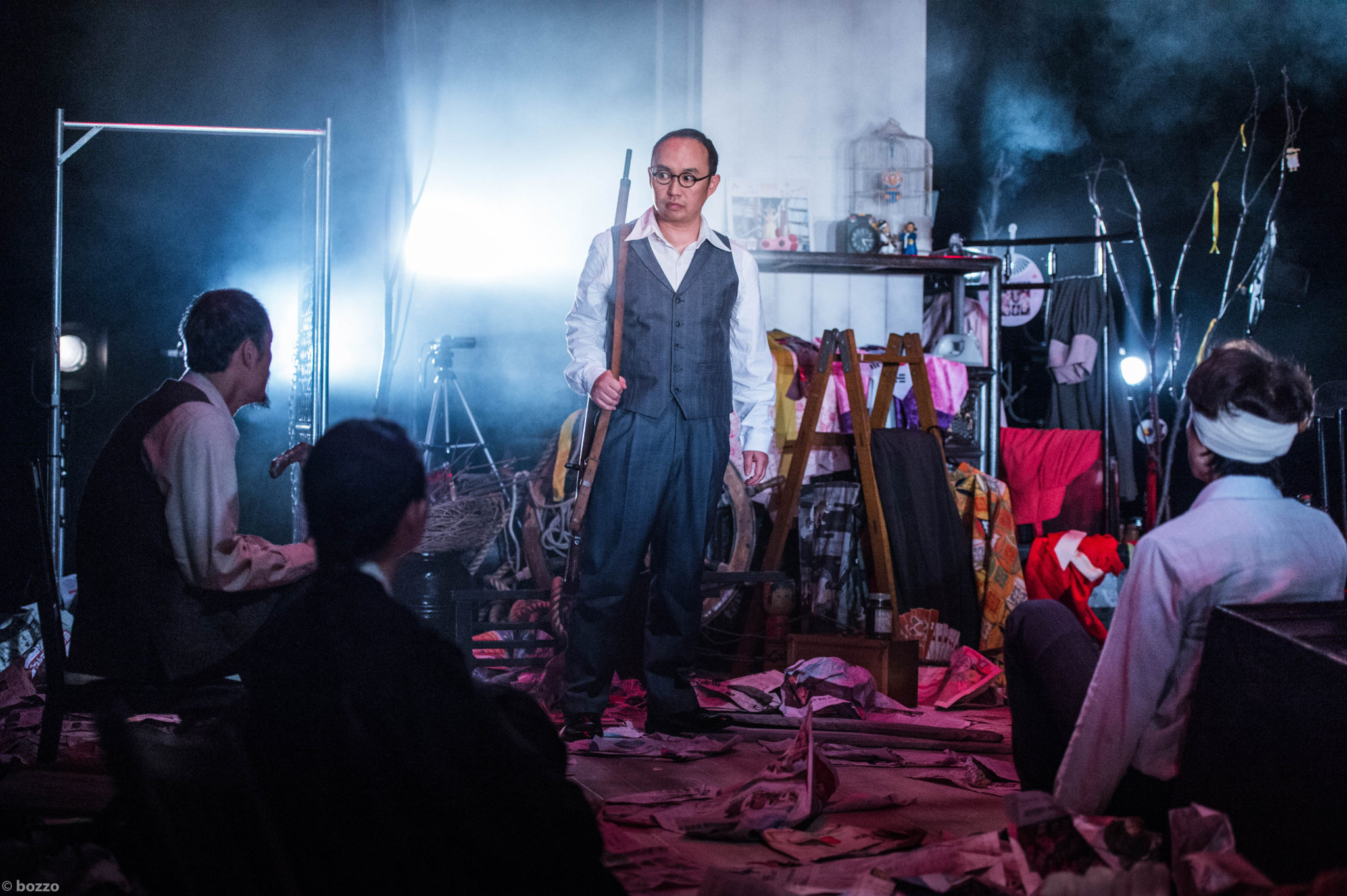 In Hisashi Inoue’s play “Romance,” Leo Tolstoy points out to Anton Chekhov that a drama is supposed to begin with the protagonist standing at a starting point, whereas Chekhov’s plays start at the places their main characters arrive at, and end at the points they departed from. Chekhov responds to that by suggesting that his plays “need to start with the arrival and end with the departure because human life is a journey that begins from ‘nothing’ and leads back to ‘nothing’ again.” An adaptation of Chekhov’s The Seagull, ”Karumegi” is reminiscent of Inoue’s assumedly Noh-inspired interpretation of Chekhov.

Written by Ki-woong Sung and directed by Junnosuke Tada, “Karumegi” – the Korean word for ”seagull” – was first performed with Japanese and Korean actors in Korea in 2013, and returned to Japan for the first time since being shown here first in 2014. Most noteworthy is the fact that the story this time is set in 1936-38 in Yonan in the northern part of Korea, which was under Japanese rule at the time. The perspective on Moscow from the Russian countryside is translated into the perspective on Tokyo/Japan from a foreign country, with some additional twist in the intricate feelings of love and hate toward Trigorin (here renamed Tsukaguchi) of Treplev (here Gi-hyeok), Arkadina (Neung-hui) and Nina (Sun-im). 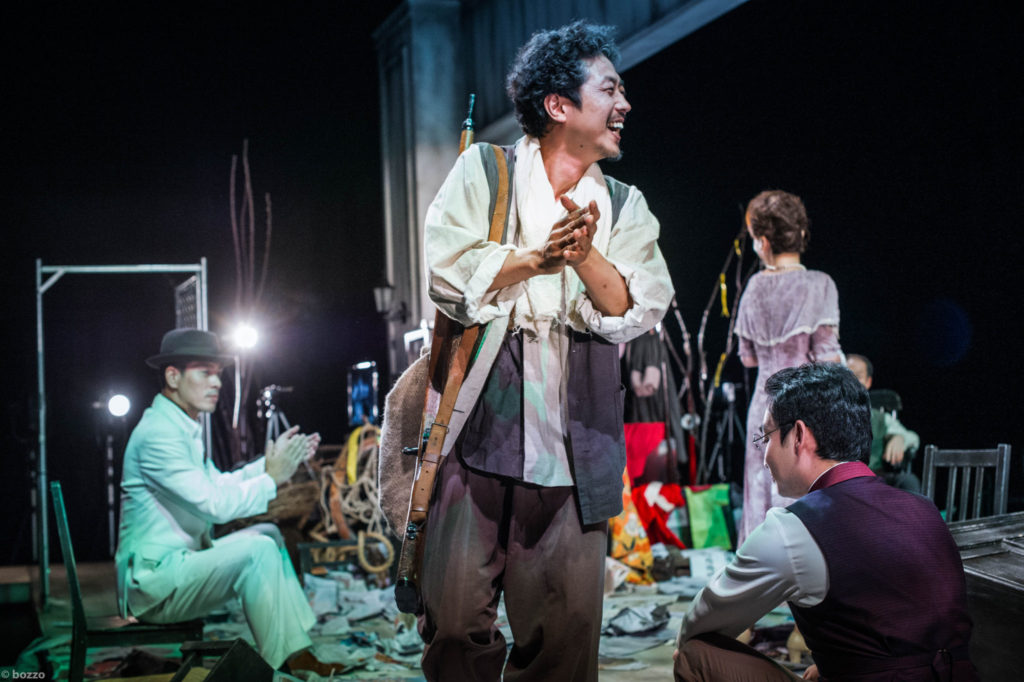 Japanese characters are generally played by Japanese, and Korean characters by Korean actors, and while the Koreans frequently speak Japanese, the Japanese rarely speak Korean. Needless to say, this reflects the reality of colonial Korea. Lee Aegyeong, a variant of Pauline, tries to establish bonds with her beloved Dr. Kang (Dorn) using Esperanto, a language free from aspects of linguistic imperialism, but that doesn’t quite work out.

The audience is seated on both sides of the long and narrow stage that is crammed with all kinds of items and newspapers from the 1930s up to the present. The actors appear from one end of the stage, only to disappear again at the other end. This process takes place at a gradually increasing speed, suggesting how things are accelerated once the wheels of fate have begun to spin. When Tsukaguchi locks the exit from the outside to block the flow, the Japanese Mitarai (replacing Medvedenko) hands a Korean boy the Japanese “rising-sun” flag and a gun in front of the Korean people that are left behind, and sends him off as a volunteer. Against the backdrop of reinforced assimilationism, Gi-hyeok kills himself by taking poison while ridiculing his own popularity, and also the other characters die one after another. Once all actors are gone, all that is left on the stage are supertitles that chronologically list up events related to Japan and Korea since 1938. When this approaches 2018, the actors appear once again in modern clothes, watch the events of this year, and disappear again. 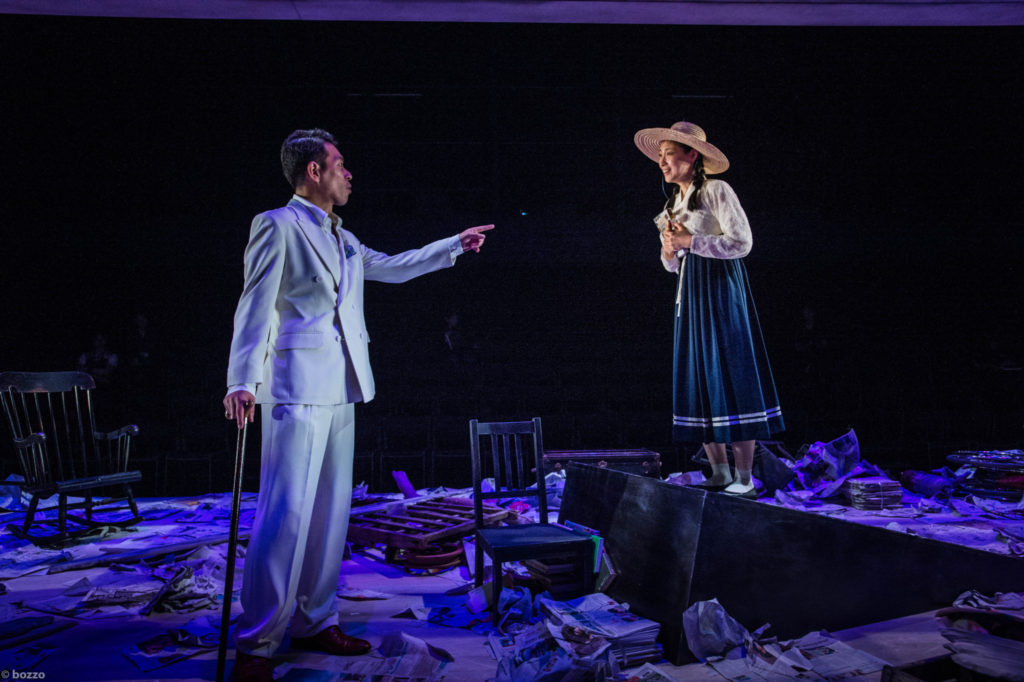 Throughout the play, music such as Perfume’s “Baby cruising Love” and the theme song of the TV play “Winter Sonata” is frequently and effectively used to charge the tragedy with additional notions of absurdity and déjà vu. Nevertheless, it is the repeated playback of Ravel’s ”Bolero” that certainly leaves the most lasting impression. The repeated playback of this music, swelling up and ending at its climax just like the way people come and go, makes the viewer sense the vanity of life. The history of Japan and Korea that overflows with stupidity is still continuing today. That’s exactly why every single actor and actress who burns out the brief moment of his or her life on that accumulated history appears as something irreplaceable.