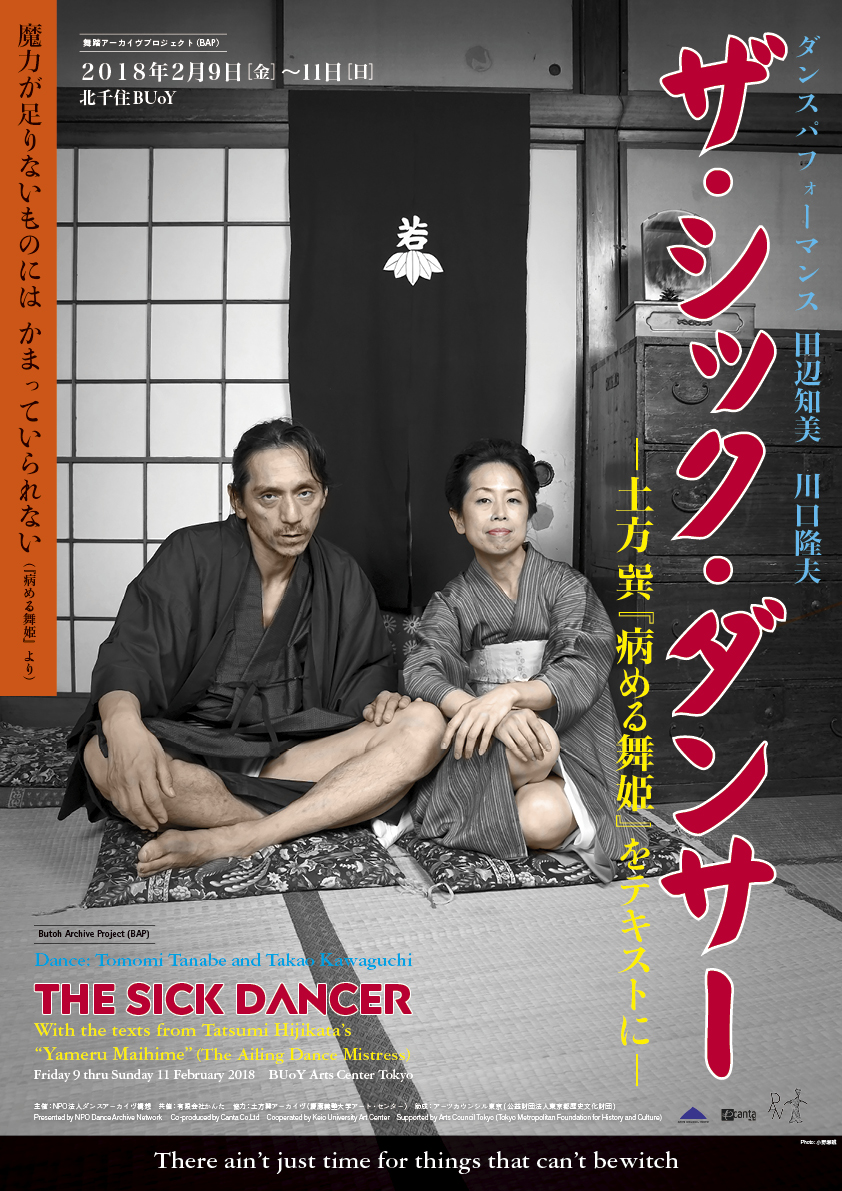 BUoY,established in 2017 in a refurbished former bowling and bath house in Kitasenju,is one of the places to go if one wants to see the most experimental performing arts in Tokyo these days. Staged here was a titillating performance based on the text “Yameru maihime” (The Ailing Dance Mistress) by Tatsumi Hijikata, one of the originators of ankoku butoh(“dance of darkness”).

“Yameru Maihime” is a chaotically beautiful writing, woven from highly refined language and thought. ”Memories, divided yet subtly reconciliating” and” floating disfunctionally as if having terminated their momentary life in a body”… Ornamented with in rich, oxymoronic rhetoric, the human body as an absurd object in itself radiates a dubious kind of appeal. Butoh dancer Tomomi Tanabe and performer Takao Kawaguchiinterpret this profound “bible of butoh” around the object of the tatami mat that appears in the text as a key element. 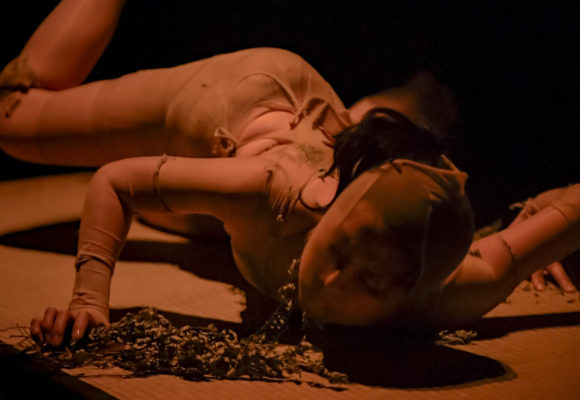 Quietly, a man wearing a red long-sleeved kimono over his head appears out of the back of the space.Heapproaches the tatami, wraps the woman up in a kimono, grapples with her, and finally abandons the kimono and the woman as he takes control of the situation. The man has a mask with a face drawn on the backside over his head, so one cannot see his face as he wrestles with the tatami while reciting Hijikata’s text from memory with a sonorous voice. He lies down, bends and straightens his limbs, stands up, steps down from the mat, lifts it up and carries it on his back, and mounts it as if riding a horse. In Japan, thetatamimat is a module of sorts that defines the size of a room, and at once the smallest unit of private space. The two performers carefully examine this by their own respective methods – the woman persistently holding on to her small territory, the manexpanding it to the outside. 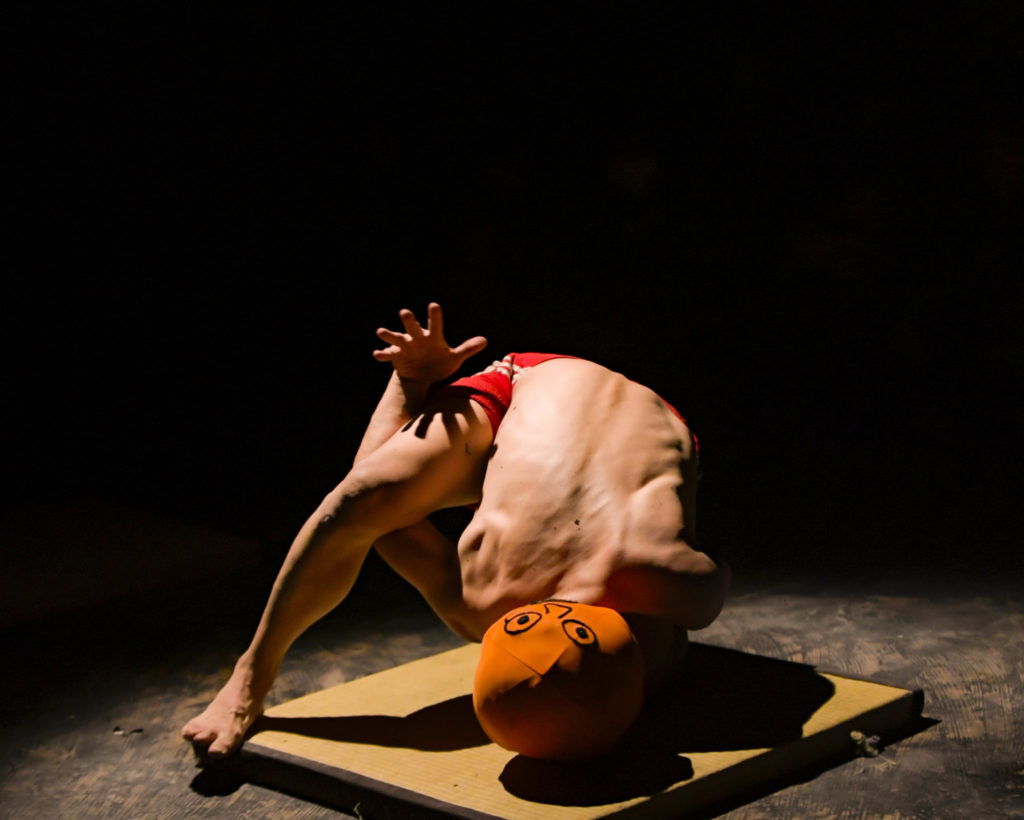 From here the audience is guided to the remains of a public bath in the other corner of the basement space. The two performers explore the new environment with their bodies, groping their way along the mosaic-covered wall, acrossthe densely tiled floor, and along the smoothly curved basin. The woman is slovenly dressed in a red kimono, while the man fights with a red rope that he hauls out of his red jersey. Tied together by this rope that resembles at once a blood vessel and an umbilical cord, the two begin to dance. The scenery looks like a weird dream, and it is that very bizarreness that lends the scenery a spellbinding kind of beauty. At some point the lighting that was dominated by blue tones turns to red, and the dancers, the audience, the entire venue – all is now dyed in deep red light and shadow. 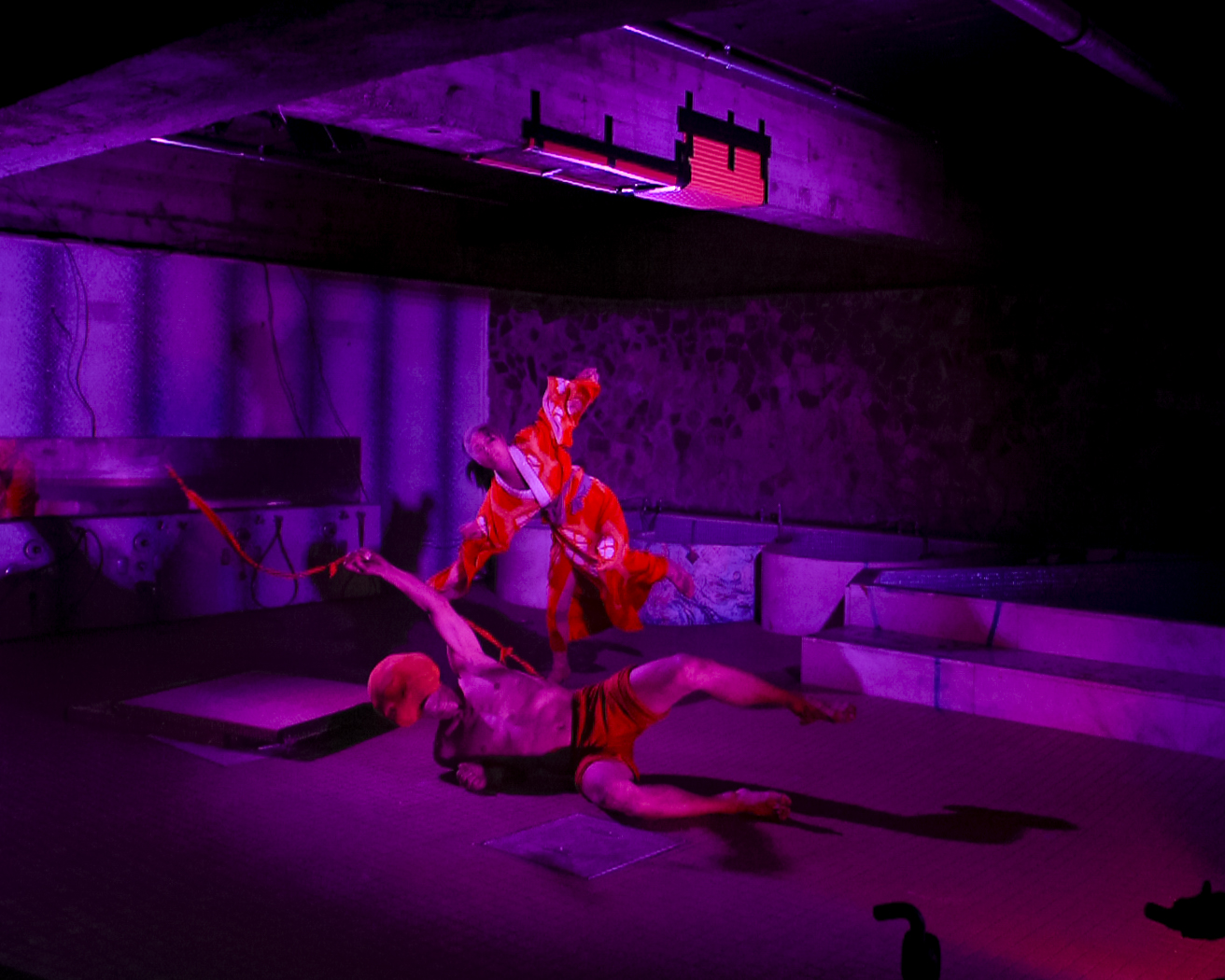 Tomomi Tanabe is a butoh dancer who has some experience with Hijikata’s teaching, while Takao Kawaguchi continues to explore the realms of dance, theater, video and visual art, in addition to his work with Dumb Type. In recent years he has beenengaging in performances inspired by the things he found in the archives of Kazuo Ohno and Tatsumi Hijikata. Approaching the body, and devising movementsfrom different directions according to their respective experiences, the two artists filtered Hijikata’s textthrough their own intellect, and incarnated his body in the sick dancer that they eventually brought to life in 2018.

I saw Choy Ka Fai’s “Unbearable Darkness” in Yokohama immediately after this performance, and I would say that these two dancers’ work left an even deeper impression in terms of faithfulness and importance. That is because Ka Fai’s “work in progress,” which, more than thirty years after the ankoku butohfounder’s death, approached Tatsumi Hijikata’s various mythical statements with gestures of dissolution and reconstitution, arbitrarily quoting historical contexts by way of a medium on Osorezan that spoke as “Hijikata’s ghost,” and an avatar that performed Hijikata’s movements in a digitally processed form, ended up as a superficial demonstration in Tatsumi Hijikata’s name, which the artist supposedly aimed to avoid.