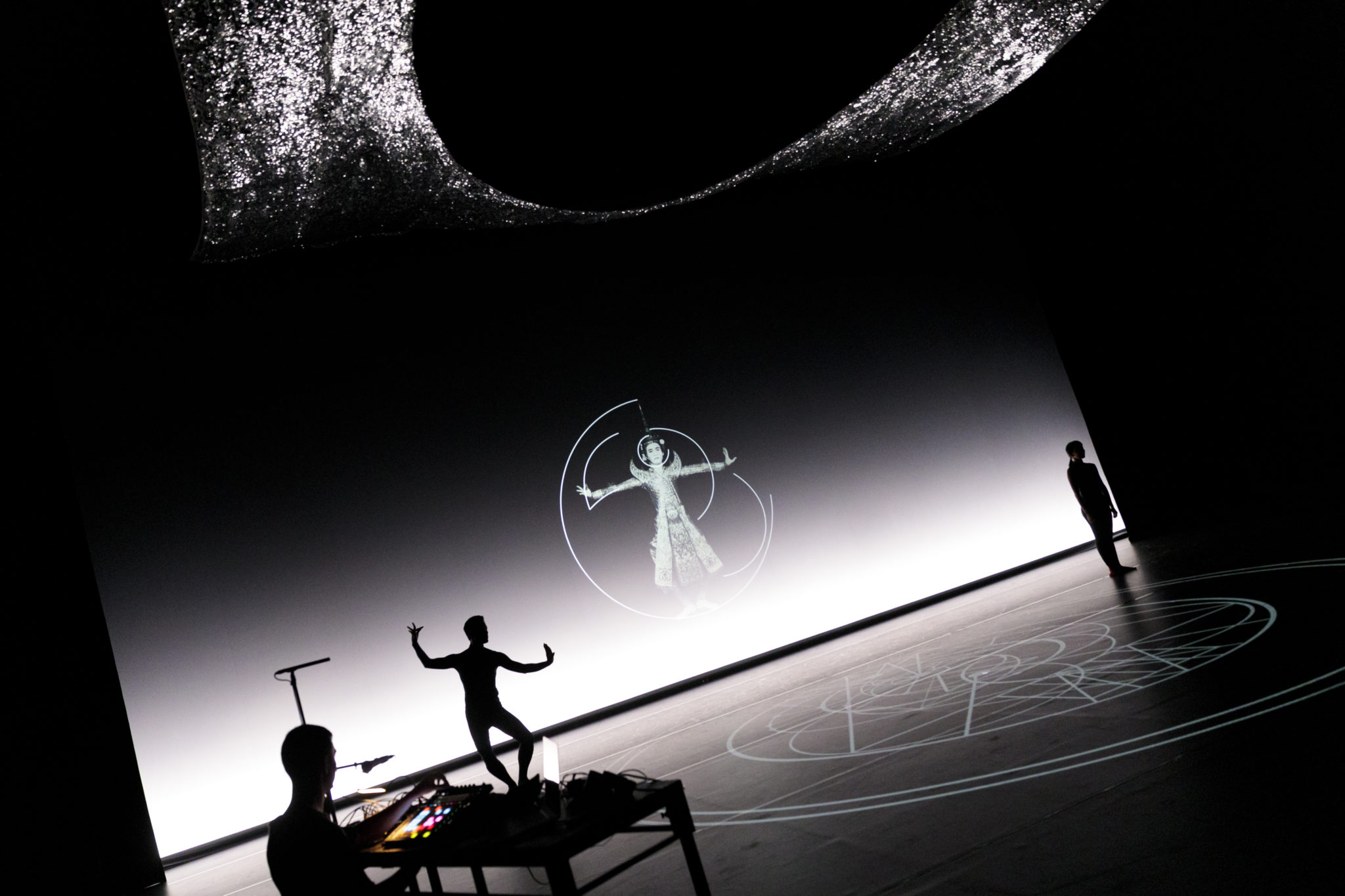 Examining oppression through bodies – Highlights of the TPAM 2020 Direction program

February 2020 once again saw a great many performing arts professionals gather in Yokohama for the Performing Arts Meeting in Yokohama (TPAM). This nine-day event, intended as a forum for interaction among artists and other creatives, consisted of programs such as TPAM Exchange, which centered on debates and presentations, and the TPAM Direction performance program. This year’s event featured participants from 46 countries and attracted an audience of about 31,300, including non-professionals, making the 2020 edition of TPAM the largest since the event was first held in 1995 under the name Tokyo Performing Arts Market.

This review focuses on those performances in TPAM Direction – a jointly curated program themed on “the body” – that encouraged the viewer to consider various forms of oppression. The curators were selected by the TPAM director, PARC (Japan Center, Pacific Basin Arts Communication) President Hiromi Maruoka, whose policy was to pick contemporaneous works able to attract audiences with a preference for radical forms of expression. Another angle was provided by the Japan Foundation Asia Center, one of the organizers of TPAM, which has promoted a focus on Asia (2015-2020) – and thereby supported the selection of experimental works from Southeast Asia, including Apichatpong Weerasethakul’s “Fever Room” （2015, Japan premiere at TPAM 2017）. 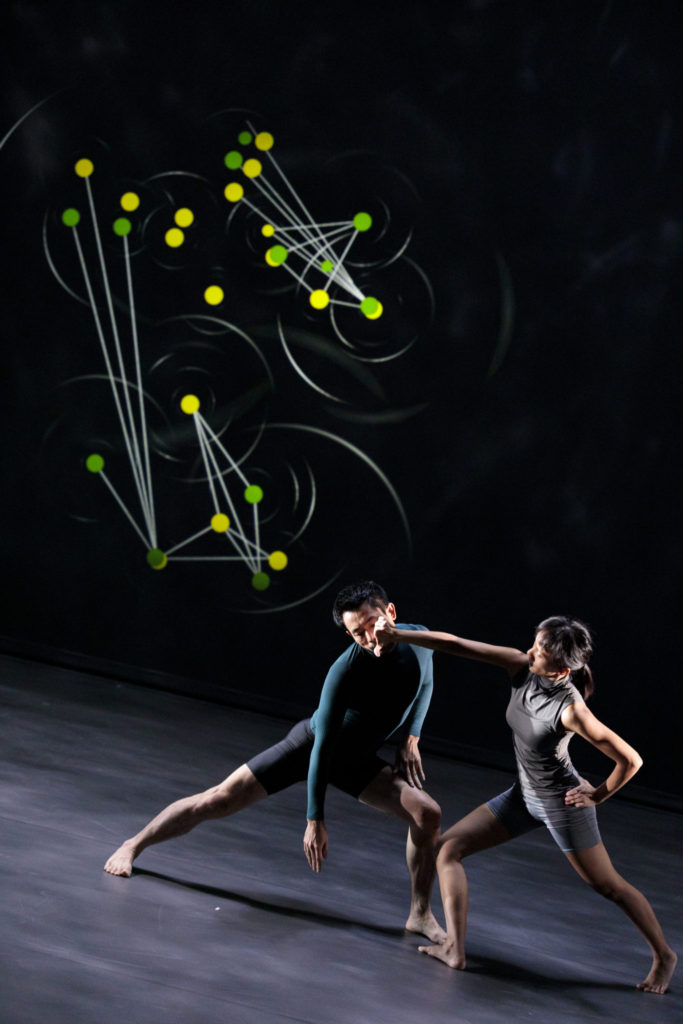 Two Southeast Asian dancers and choreographers presented new works incorporating traditional performing arts at TPAM 2020. These two were Pichet Klunchun (Bangkok) and Eko Supriyanto (Surakarta), both of whom have worked together with TPAM on international co-productions.

“No. 60” choreographed and directed by Pichet, had its world premiere at TPAM. This piece is an investigation of the essence of Khon – masked dance drama in Thailand – by stripping it down to its most basic elements. That stripping was done by Pichet himself, a master of the 59 core poses and movements of classical Thai dancing. Khon has been performed since the time of the Ayutthaya Kingdom, its heritage kept alive by the royal court until the twentieth century, when the art form was placed under government protection. It dramatizes stories from the ancient Indian epic Ramayana, with performers wearing pagoda-like crowns and extravagant costumes. Khon is often performed on diplomatic occasions and for tourists as well.

Pichet, however, stands against the regime of associating the classics only with state authority, and has strived to “democratize” Khon instead. Employing modern technology, he has developed diagrams that describe how limbs move and energy flows in each of the core poses and movements. His analysis and work on these diagrams contain the power to relay the essence of Thai classics across cultural lines and to future generations.

“No. 60” which combines actual movement with computer-generated diagrams, is a duet performed by Pichet and a female dancer. They wear nothing but tight shirts, leggings, and socks; an expression of simplicity that, even in low lighting, helps add to the intoxicating feeling brought about by the dancers’ refined poses and the silhouettes of their outstretched fingers. Flamboyantly decorated costumes would not reveal the performers’ sharp figures in such dim light.

Nearing the end of the performance, the dancers’ everyday movements wake the audience from a state of passionate comparison between the CGI explanations of each pose or movement and their live enactments. The performers sit down, taking off their leggings and socks before folding them. Their sleek bare feet accomplish a separation from the deified Khon characters, inventing a new vocabulary of movement in which classical and contemporary forms of dance are fused together. “No. 60” probably doesn’t refer to any specific pose or movement; it is rather a dismantling of the classics by relieving poses and movements of their meanings and stories, thereby revealing a dimension of free creative expression in which the essence of the classics is opened wide. 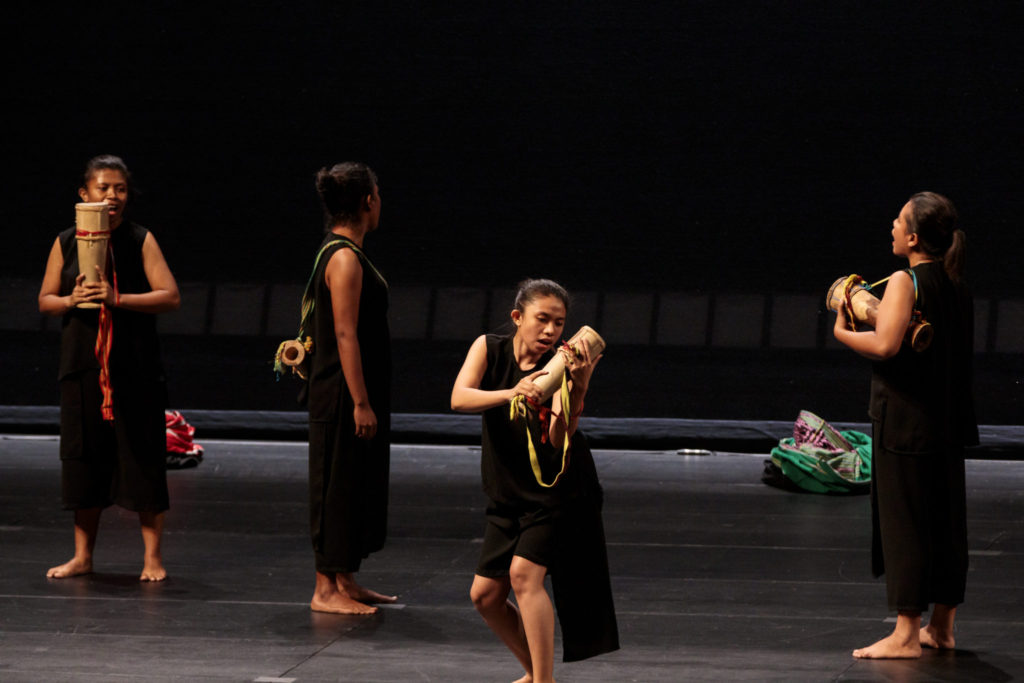 Trained in Javanese court dances and Indonesian martial arts, Eko Supriyanto has also provided choreography for popular productions such as one of Madonna’s world tours. In recent years, he has focused on creating pieces based on research conducted on remote islands, where he has sought to polish the local peoples’ inherent talent for dancing. In “IBUIBU BELU: Bodies of Borders,” which had its world premiere at TPAM, he engages with communities that seek to preserve the Likurai dance and textile traditions in the region of Belu in Nusa Tenggara Timur, eastern Indonesia.

The five female dancers who appear in this piece are all from the island of Timor, which was a European colony from the sixteenth century until World War II, when it was occupied by the Japanese military. The western half of the island became part of independent Indonesia after the war, but rebels on the eastern side opposed unification. East Timor eventually won its independence in 2002, dividing the island politically.

The performance begins with a beam of light emitted from the back of the stage, hitting the audience in the eyes. Five shadowy figures appear against this light, conjuring up memories of the victims of state exploitation and oppression during the independence dispute. Textiles with varying patterns are laid out where the dancers’ appearances came into sight, revealing that all five are dressed in black. The tense lighting symbolizes the authority wielded by the rulers. The darkness and twinkling lights make the scene resemble the world of the dead.

The scenes that draw on Likurai, however, are the opposite. Bodies are struck with hands and songs sung, expressing an overflowing vitality. As the performers hit first their chests, then their bellies and thighs, the sound they produce is altered depending on the body parts they strike and the intensity they do so with. Thin drums are beaten with both hands, a chorus rises, and the rhythm turns celebratory. But when the lights come on, everyone is gone. A ray of light across the stage tears apart the bonds that unite this group – the people who keep the traditions of the arts, dyeing, and weaving alive – like a national border. The five percussion instruments left on the floor seem a hallucination to those whose homes were left on the eastern side and are now suddenly “foreigners.”

The dancers soon reappear, but perhaps time has passed. Three characters wearing vividly colored textiles sit with their backs turned toward the audience. These silhouettes seem like corpses, but they also appear to testify to an enduring resistance. In the finale, a single black-clad dancer stands motionless with the five drums on her shoulder. This lone figure hints at the decline of the community, but can also be thought to express how her loyalties lie with that community – rather than with any country. 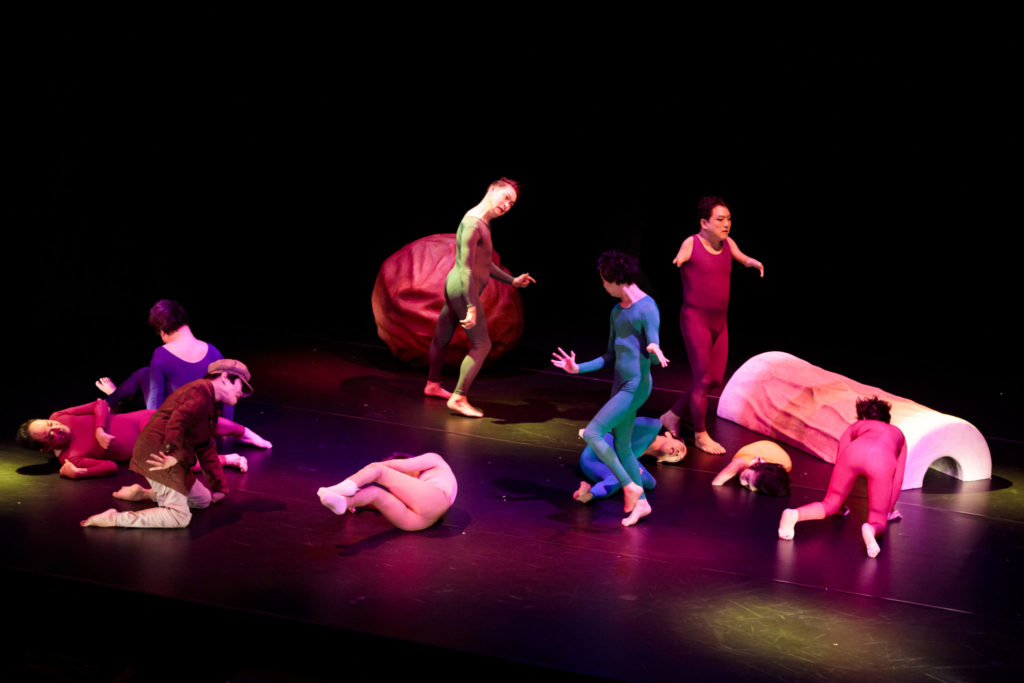 Turning disabilities into a unique form of expression, with a focus on food and life: “Sandbox Bento” by Performance Troupe TAIHEN, artistic director, writer and director: Manri Kim

“Sandbox Bento” by Performance Troupe TAIHEN (first performed in 2019, to be re-performed at Za-Koenji Public Theatre November 6-8, 2020) is a piece written and directed by the Osaka-based artistic director Manri Kim, whose mother was a Korean traditional performing artist. It brings to mind the 2016 Sagamihara stabbings, when 19 people with disabilities were murdered at a care home in Sagamihara, Kanagawa, highlighting the dangers of the cult of productivity through an opening clip in which a young person throws a lunchbox into a trash can.

On stage, a performer (Ayano Watanabe) dressed in an orange unitard is surrounded by white balls. This expresses typical lunch box contents: grains of rice and a sausage cut up to resemble an octopus. This fun personification of food brings to mind the changes in size undergone by the protagonist in Lewis Carroll’s “Alice in Wonderland.” Appearing next is a figure (Manri Kim) in a white unitard burdened with some objects – an aberrant grain of rice. This ghost-like being symbolizes at once “faulty” foodstuffs discarded without regard for their nutritional value or origin, and people with disabilities alienated from society without consideration for their soul or individuality.

The performers transform disability into a privileged form of expression, kicking off an invaluable movement. One example is the reunion of sausage and omelet (Nozomi Mukai, in a yellow unitard): Mukai lies down on the floor, attempting to move by rolling, while Watanabe crawls limberly to the live tunes of Klezmer (a Jewish musical tradition from Eastern Europe). Their movement creates a beautiful “dance.”

Combining cuteness with a dispassionate perspective, this fantasy advances the world view that the act of eating is simply part of the circle of life. That honest take on food, devoid of redundancies such as gourmet enjoyment and manners, allows for pursuit of life itself. 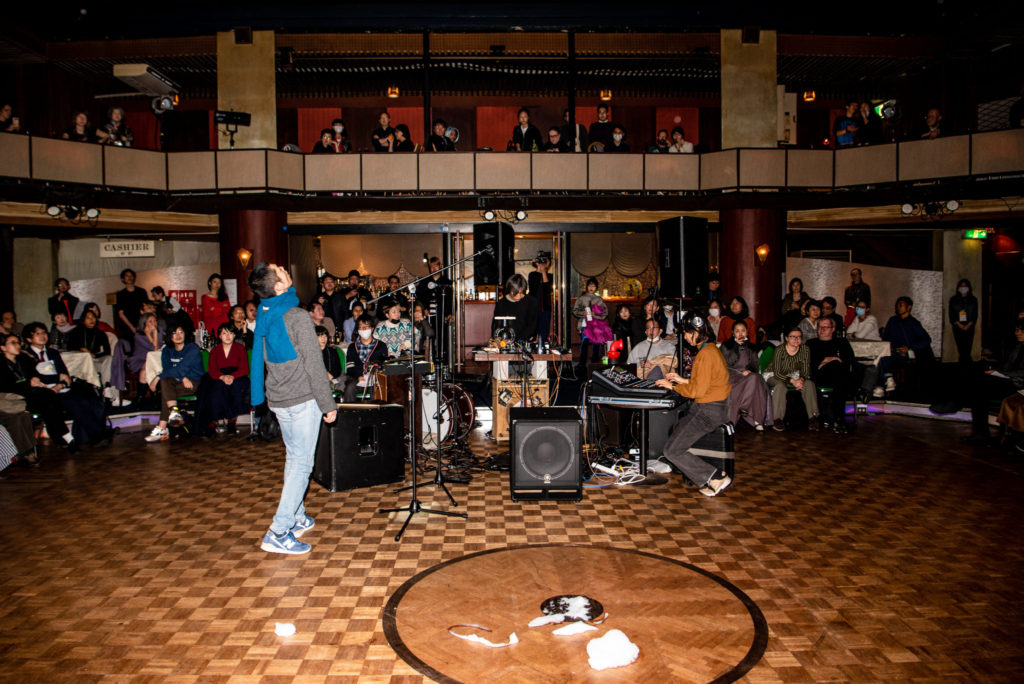 The three aforementioned performances all took place at the KAAT Kanagawa Arts Theatre, but one of the pleasures of TPAM is that shows are also held in historic buildings, on the boat, on the street and in other interesting locations. February 16, the last day of the event, saw the Cliff Side dance hall in Motomachi host a world-premiere double bill of “Ogiyodiora / Nejiroll,” directed by independent producer Jooyoung Koh (Seoul).

First up was “Nejiroll” by Kyoto-based dancer and choreographer Pijin Neji and Osaka artist Tetsuya Umeda. Taking over a space that was built the year after Japan’s defeat in World War II, Neji started asking questions in Japanese and English and throwing out dance terms such as “slow” and “quick.” Penetrating time from the past to the future, his words relativized history by reminding us how languages and arts of foreign origin, which were the pride of Yokohama in the late Edo period, were branded “tools of the enemy” and banned during the war. 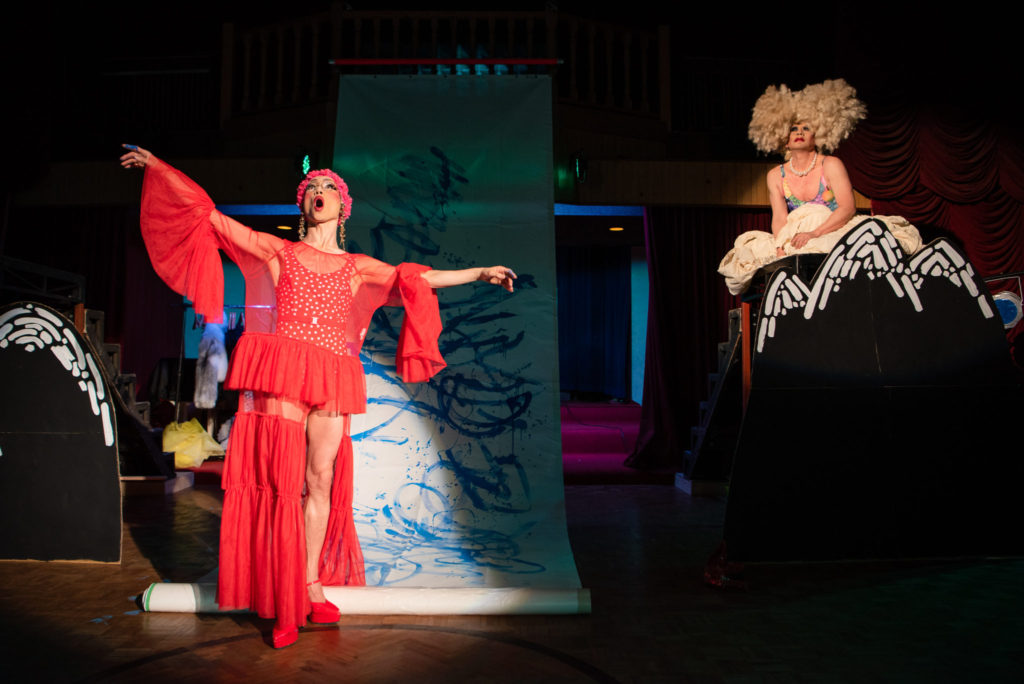 Next up was “Ogiyodiora” (a chant used when rowing boats; there is also a song of the same name) by Seoul-based choreographer and performer More Jimin and activist-artist Akira the Hustler from Tokyo. These two drag queens, who engage in artistic dialogue without paying heed to Japan-Korea relations, trampled gender lines with pointe and glitter shoes and made discrimination against social minorities a laughing matter.

The issues raised at TPAM 2020 were received and discussed by a diverse range of people, and the seeds of new visions were also planted. Soon after the event concluded, however, the coronavirus crisis brought performances everywhere to a halt. “The body,” with its many layers of meaning – bone and flesh, health, microcosm, and so on – is faced with innumerable forms of oppression. The importance of networks cultivated by international platforms such as TPAM is sure to increase from here on, as they will be necessary for performing arts to evolve in response to this crisis, to which there is yet no end in sight.