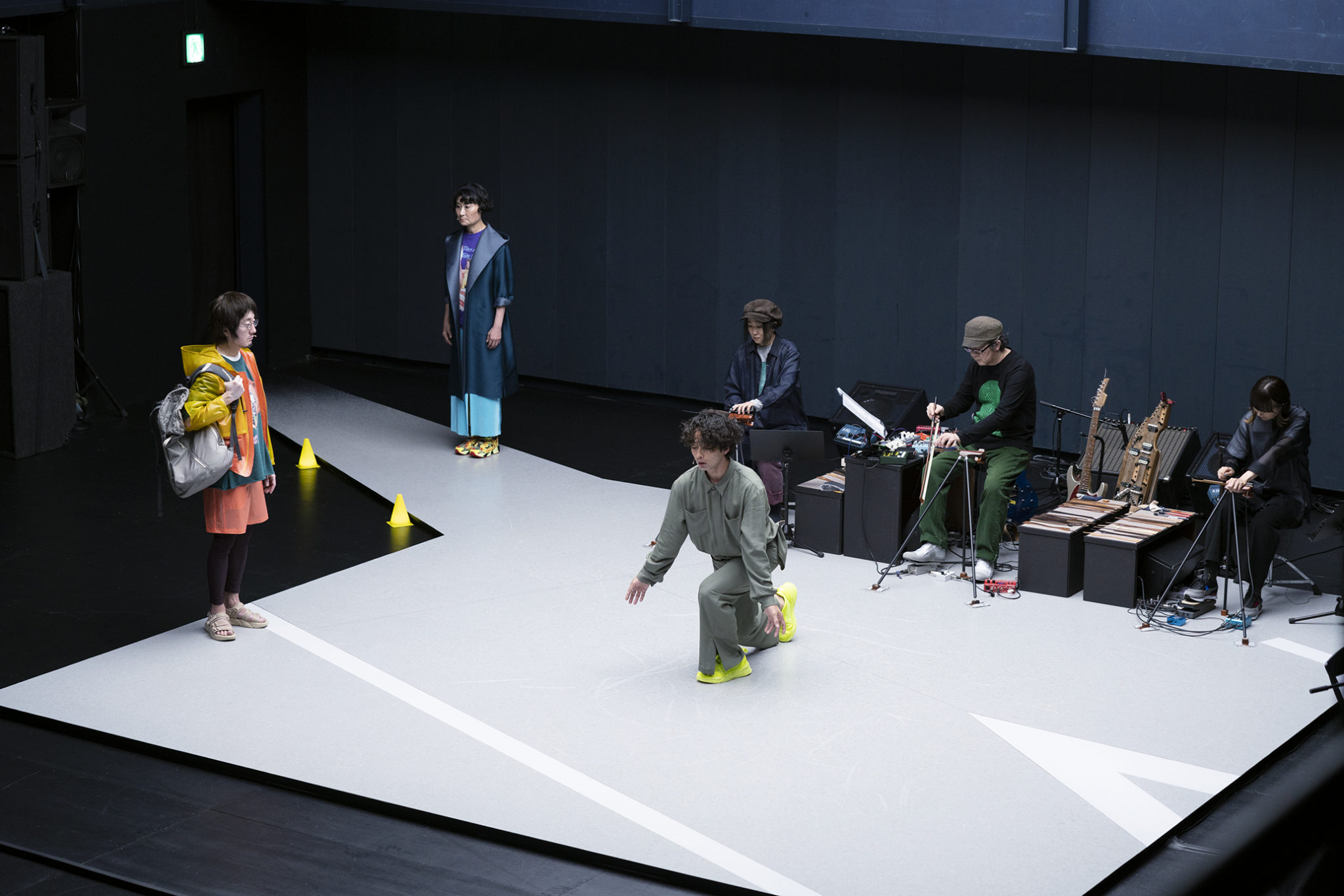 In comparison to other forms of theater, Noh evokes highly particular sensations in the audience. While Noh and kabuki are often discussed together, both being forms of traditional Japanese theater, they are in essence completely different. Kabuki and Noh plays do share some of the same motifs, but the essence of kabuki is in its drama – the emphasis is on expressing the reality of a play on stage, and the audience is able to enjoy the atmosphere of specific settings through effects such as the darkness of a villain’s hut and the villain’s physical appearance.

Noh, however, is different. The staging of noh relies on simple abstraction, in addition to the symbol-like masks and costumes of the shite (the lead performer). The shite moves extremely slowly, and practically everything that happens in the play is relayed through sound, mainly the shite’s singing, or utai, and the chorus-like jiutai. For the onlooker, the experience is akin to a performance of music.

The shite’s movement “extends” time, achieving a total break from everyday existence. The resulting place, cordoned off from daily life, inspires an internal conversation in the onlooker’s mind. What switches are flipped in the brain and why is unclear, but the specific images and words that rise to the surface sure take on lives of their own.

The shite’s minute, slow movements, comparable to the opening of a lotus flower, and the play’s plot – with which one is usually already familiar – help guide the viewer into a state where oneself, others, and one’s surroundings begin to melt together and one feels connected with the world. The most remarkable thing about this is that though the experience itself is a personal, inner journey, the destination frequently ends up being the same for so many people (but only when the performer is really good, mind you)! The yugen (“mystery and depth”) of Noh is in its system of seeking to evoke a shared appreciation of being that cannot be put into words and exists beyond human speculations.

Transported across time and space, this essence makes the occasional unexpected appearance in contemporary street culture. States much like those brought about by Noh can be discovered in the club scene, where DJs take listeners on auditory “journeys” by mixing sounds and beats into thumping music. Noh music, which consists of hayashi (music) and utai (vocals), is actually played at a rather high volume in theaters. Void of melodies or other anchors on which to structure the listening experience, the sound lays bare the aspects of time and change. This is very much like the state accomplished by club/DJ music, in which repetitions of the same beats can suddenly take the listener from one world to another that’s completely different. The Noh audience’s gaze, fixed on the shite’s movement but in fact quite devoid of vision, resembles that of a club crowd dancing with their eyes on the DJ. 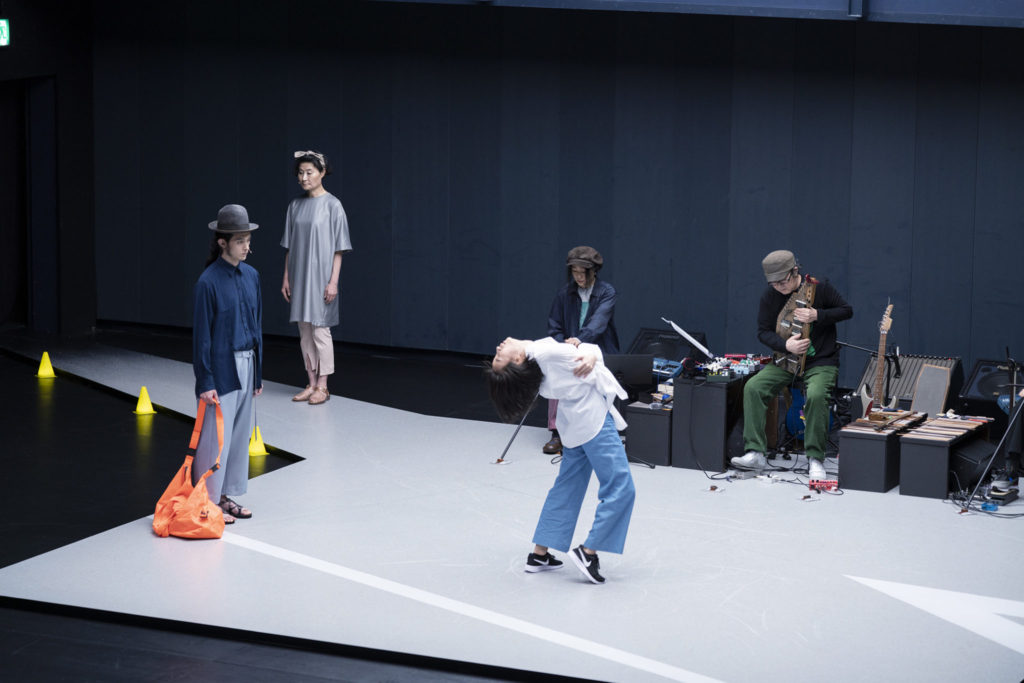 When the structure of Noh is employed to stage a contemporary play, most directors stay true to the classic theory that human psychology and behavior are the same today as in ancient times, and place their story in a contemporary daily-life setting. That’s because Noh tales, in which most of the shite are ghosts who hold a grudge or have regrets about their past life, are universal, with themes that speak to all of us.

In writer and director Toshiki Okada’s case, however, the ghosts’ grudges and regrets, i.e. the shite’s resentments and disappointments, are super-sized. Here, the two characters are none other than Zaha Hadid (“Zaha”), the architect behind the original but later rejected and withdrawn design for the National Stadium, the main venue of the Tokyo Olympics, and Japan’s nuclear fuel cycle policy (“Tsuruga”), which depended on the experimental nuclear reactor Monju, a ¥1 trillion facility that never became officially operational and is now being scrapped. While Zaha Hadid was certainly a powerful presence and a remarkable talent, Monju and the nuclear fuel cycle policy are not a single person but an entire nation’s nuclear power program, making the play feel almost ridiculous in its scale. But it’s precisely this wildly ambitious setting that brings to light the enormity of what seems to be Okada’s latent theme: the unconscious mass of resentment and regret in our age of social media, in which countless Tweeted words can drive people to suicide.

The National Stadium, the Tokyo Olympics, and nuclear power are all topics that engaged not only those involved in these projects but countless others, whose thoughts spiraled into repeated social media flame wars.

One rejected after the fact, the other destined for decommissioning without ever operating – both subjects’ very existence was denied, resulting in grudges and regrets on an epic scale. These grudges and regrets extend to the people associated with the two, but even more to the point, and this bears emphasizing, the words of people in journalism and on its fringes were seen by members of the public and shaped their views, numerous and entirely different from those “on the inside.” These truly terrifying “ghost ideas” are indeed a product of the social-media age.

As mentioned above, Noh drives its onlookers to ask questions of themselves. In this case, two representative cases that highlight Japan’s structural evils are employed to pick the audience’s brains for all sorts of conflicting motives. When that collective unease is represented on stage through the singing of the shite, waki (supporting actor), and jiutai (Tavito Nanao), the result is yugen itself, or something that cannot be put into words and exists beyond human speculations.

Reading the script, the lines are entirely free from suggestion; issues such as the Olympic bid, the international architecture competition, the nuclear fuel cycle, and fast-breeder reactors are explained in a journalistic manner, i.e. directly and with straightforward vocabulary. In other words, these lines already exist in our heads, they hardly differ from the mainstream takes on these issues, and therefore cannot be expected to flip many “Noh switches” that kindle conversations in the onlookers’ heads.

But this is where Okada’s play shows its greatest strength: our clamorous assumed knowledge and impressions of these issues, recounted by the dialogue, are forcefully upended by the presence and performances of the actors, opening a door to a different world. That’s where the essence of the “Noh switch” lies, and Okada unflinchingly summons this essence into the present and puts it in motion on stage. 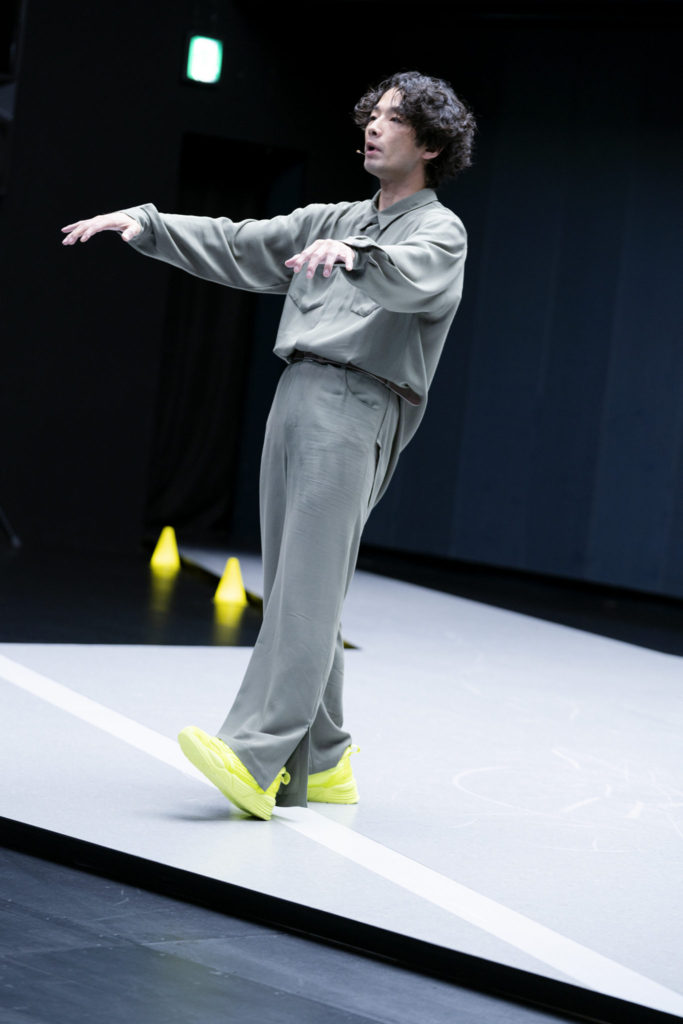 I was particularly humbled by Mirai Moriyama, the shite in “Zaha,” who plays a Japanese architect in the first half of the play and Zaha Hadid in the second. He appears, and the way both of his hands sprawl on the handrail of an overpass is already aberrant. Like a folksy bard, the jiutai Tavito Nanao sings out the “common-sense” explanation for this: “The fault is with Zaha’s design, the complexity of the three-dimensional curved surfaces” and so on, and Moriyama goes on to express each word through dance, as if he was interpreting them into the language of the body.

Just the other day, I watched a performance by two famous dancers premised on the notion that “They haven’t been dancing while listening to the music, right? Well sure, they’ve been listening, but not in a way that connects to what’s essential about it,” and was surprised that professionals, even in this day and age (when the indivisibility of dance and music is being discussed in public, e.g. in educational TV programs), lack that awareness. Mirai Moriyama’s dance, on the other hand, sneaks into Tavito Nanao’s lyrics and melodies and Kazuhisa Uchihashi’s music like a chimera. 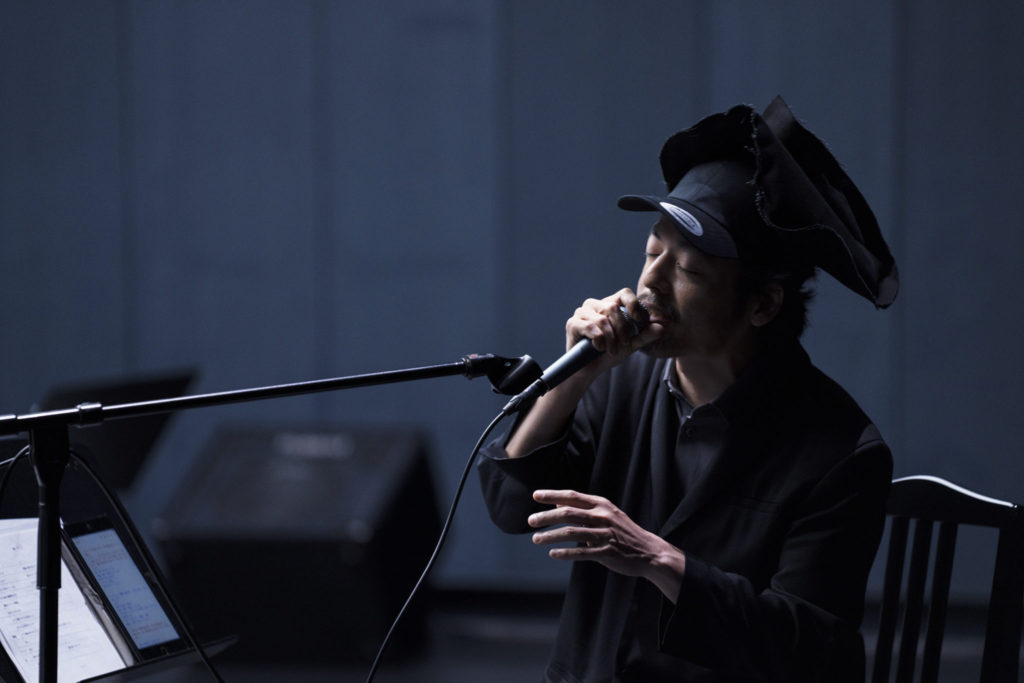 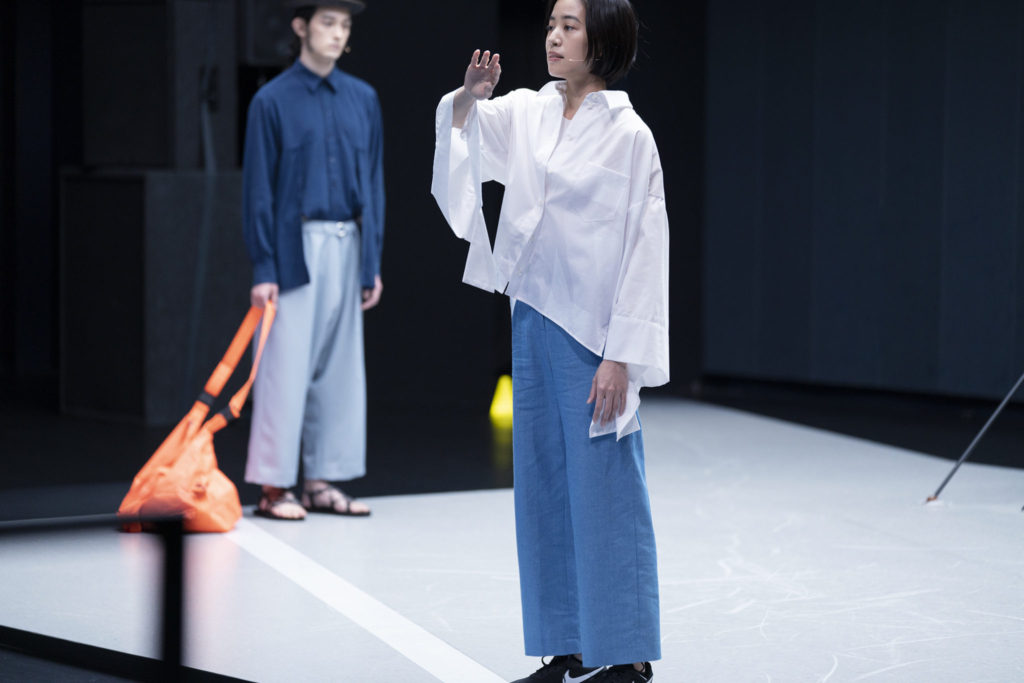 Shizuka Ishibashi, the shite in “Tsuruga,” exhibits an equally minute attention to music and words. Her female, life-giving body performing Monju, the reactor that was scrapped without ever operating, conjures up yet another type of pain.

I suddenly came to think of Juro Kara’s Theory of the Privileged Body, which affirmed that individual actors’ “privileged bodies,” rooted in their own lives, begin to speak when on stage, appearing on it as “dramatic illusions.” That applies to Okada’s work, in which waki and ai (comic actor) roles are played by Hairi Katagiri, Louis Kurihara, and Shingo Ohta, all of whom are perfect fits and leave nothing to be desired. It’s been a long time since I’ve been able to enjoy this sort of experience, one already taken for granted at small theaters. The writer-director’s willingness to trust his cast and leave them to pursue states that cannot be written into text is something that’s lacking in fields such as contemporary film and manga, in which the creator is “god.”

During the coronavirus pandemic, voices proclaiming that “nothing beats a live performance” haven’t been hard to come by. Convinced of the power of plays such as“Unexplored Ghosts and Monsters,” and hailing true creativity that permeates expressions of reality, I’d like to add my voice to that choir.