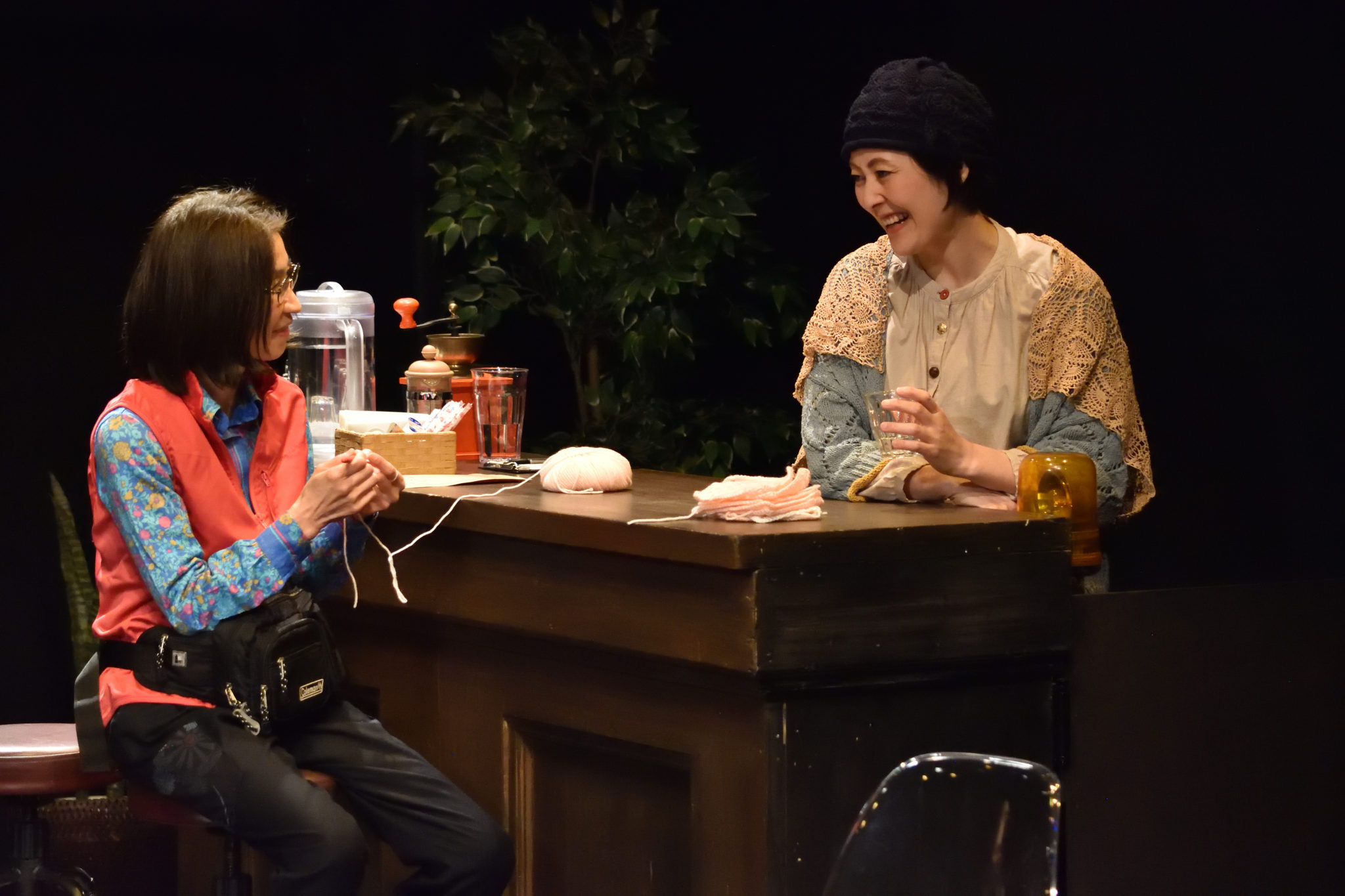 A portrait of humanity and coldhearted discrimination by fraud and money

This piece addresses the as-yet unsolved, modern-day issues of foreign residents in Japan that are being excluded from the Japanese society. People from Asian countries are facing a variety of problems related to their nationality. Their struggles are illustrated in the setting of an illegally operating casino in a so-called “game coffee shop” in a town near Tokyo, on the other side of the Tama River, with a particular emphasis on the uncertain, borderline existence of both the location and the characters appearing in it.

“Fraud” and “money” are the two keywords around which the play revolves. Masami(Masami Nakamura) and her superior Koichi Kondo (Yuichi Saito) together use all kinds of techniques to coax Masami’sformer boyfriend Shin-chan (Kento Ogura) and his friend Roy(Yo Yoshida) into a pyramid investment scheme. Saito comes across quite funny as he tries in all too suspicious ways to sell his product under the guise of “self-development,” and in the course of the comedy of cheaters and cheated, it becomes clear that Masami, Shin-chan and Royshare the same circumstances of non-Japanese natives. Masamiand Shin-chan are Korean, while Royis the son of Japanese and Filipino parents. Masamidoes her current job because her tentative employment agreement had been withdrawn because of her origins, and it is from this standpoint of a weak person who is used as a partner by a Japanese swindler, that Masaminow tries to betray her countryman. The fraud scheme works as an epitome of the complicated situation these people have to deal with. 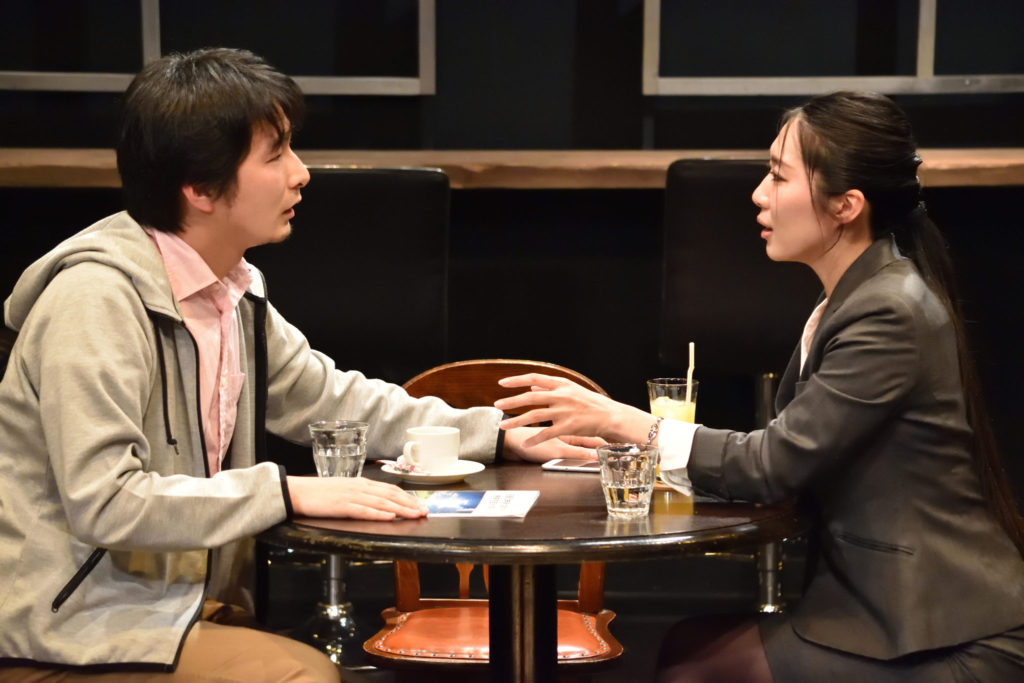 In the second half, things take a rather serious turn. Masami‘s Japanese fiancé breaks their wedding engagement, before we find out that Masamiwas pregnant with his child. After the child’s birth, the fiance’s brother (Momoji Yamada) appears at the shop and puts a stack of deposit money on the table to “compensate for Masami’schild” that they would “adopt so it could obtain Japanese citizenship and lead a happy life.” Meiko Yamamoto (Fumi Moriya), a regular customer with Ainu ancestors, protests and places another stack of banknotes on the table. “Take this!” These come from the illegal casino in the back. With two different types of money in front of her – Japanese money that reflects the old imperialist idea of ethnic discrimination by monetary means, and unlawfully acquired minority money – Masamiis torn between conflicting emotions. Her double-bound situation, unable to choose either stack, symbolizes the uncertain position of minority people that live in Japan but aren’t treated as Japanese citizens. 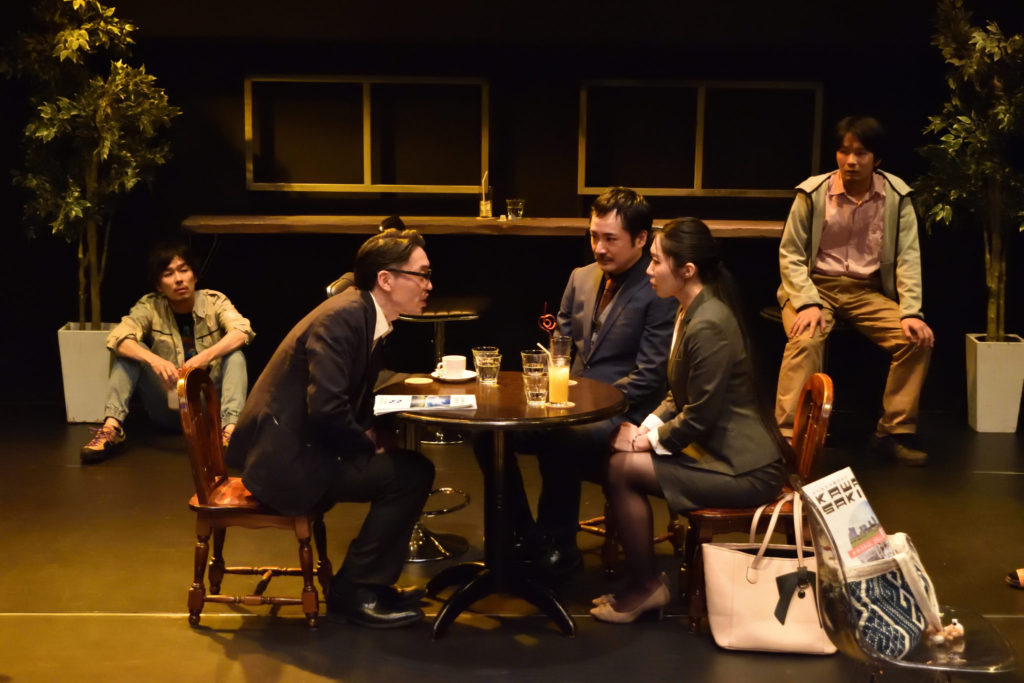 Meiko visits the Korean shop-owner in hospital to give him something she has knitted for him. The meshed fabric with its knitted threads again seems to represent the situation of minority people that are entangled in a mesh of problems. But the fabric can also keep the body warm. Now will we ever see the day when similar “cold protection measures” are implemented in Japan in order to kindly integrate minorities? This play doesn’t try to make a loud ideological statement. It simply illustrates and projects the deep-rooted ethnic problem of people being made fools of by cold “money” as a real-life scenery.