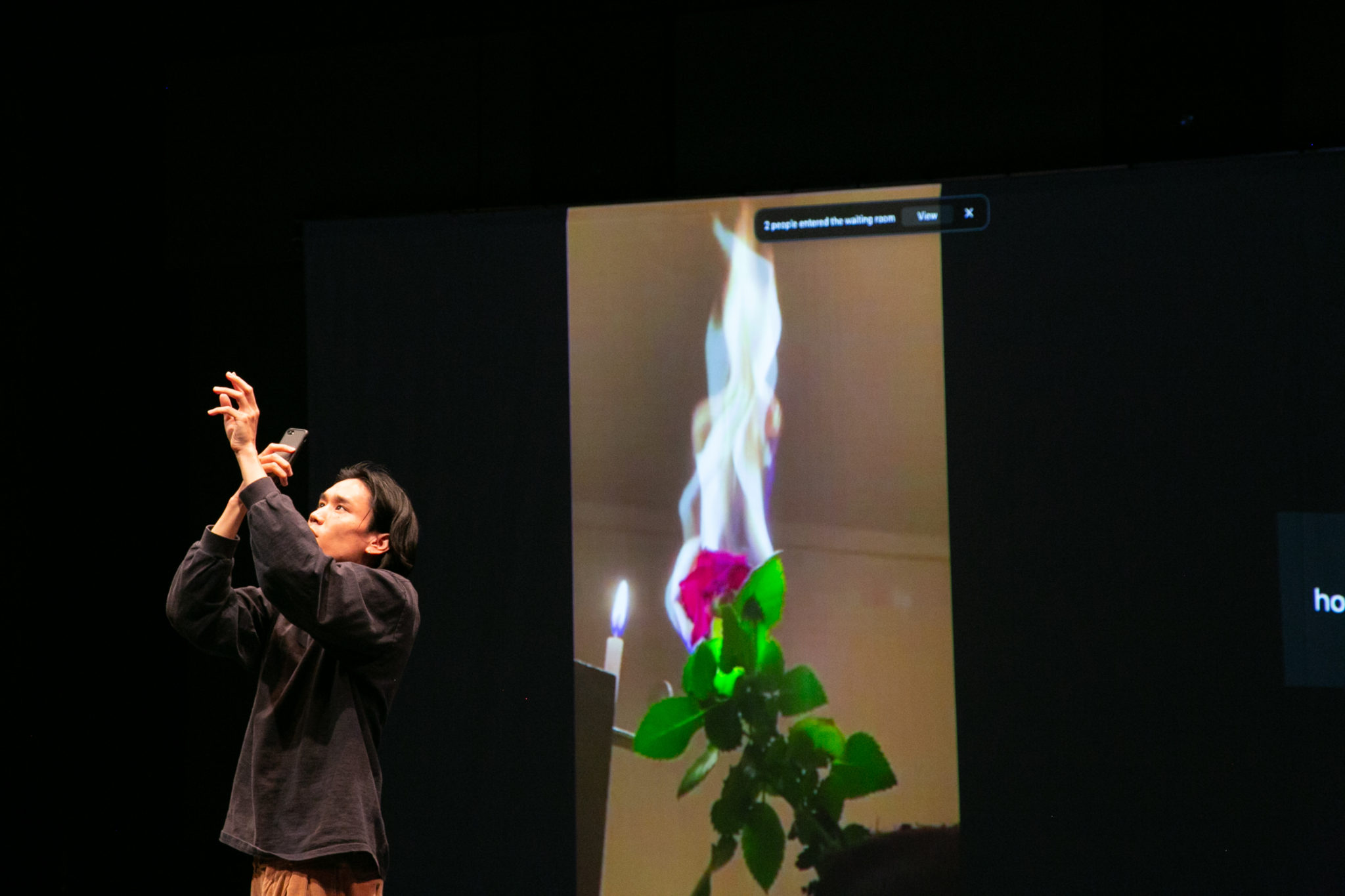 Things that were, and things that likely will be, in the “aroundness” 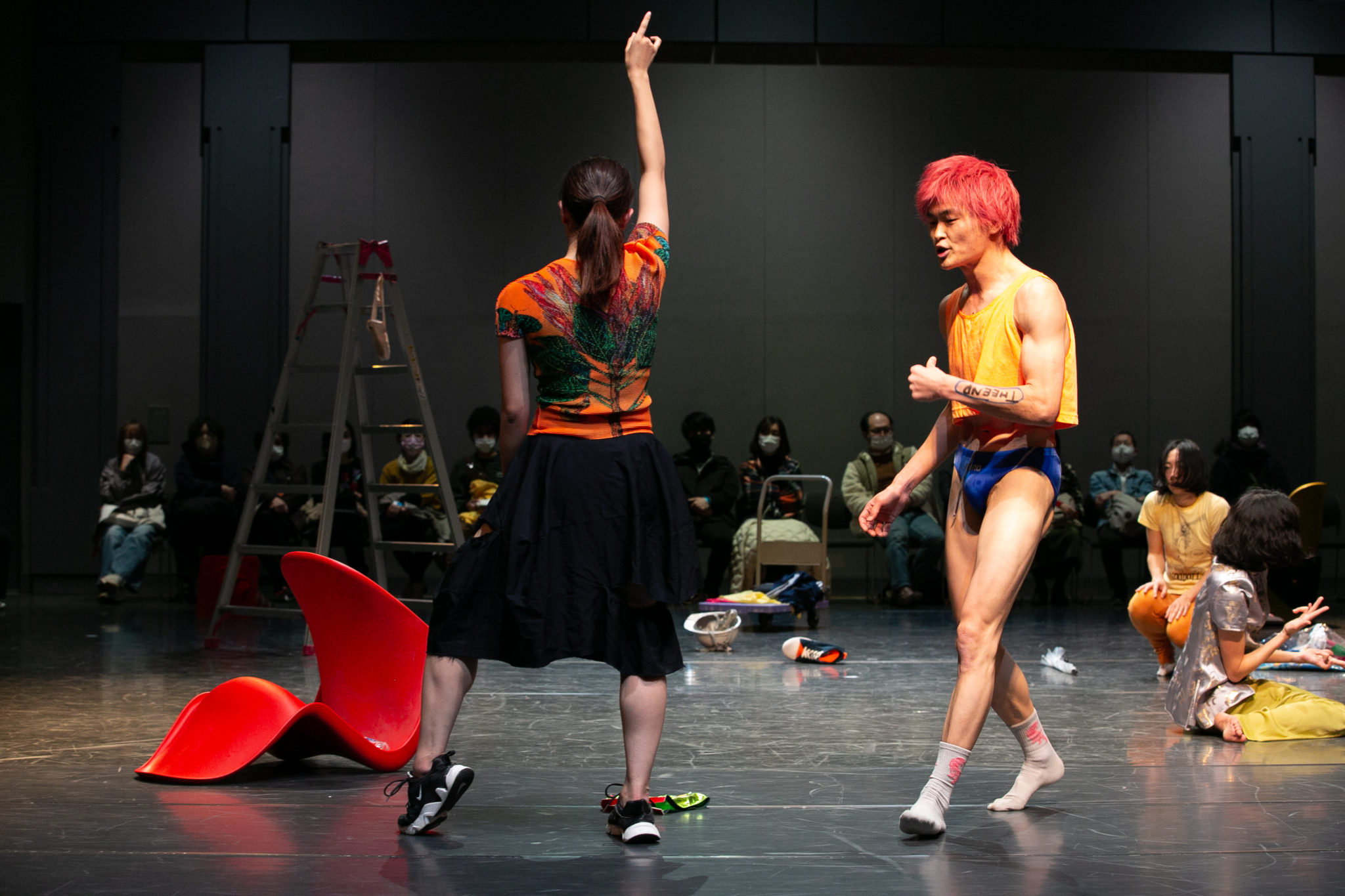 The artist-run Whenever Wherever Festival kicked off in 2009 and has over the past few years employed a system of joint curation by several individuals. In 2021, two programs took place from December 23 to 26. The first of these, “Mapping Aroundness,” sought to use the city “as an intermediary to imaginatively locate ‘aroundness,’ a unique territory that escapes easy definition, *1” while “Becoming an Invisible City Performance Project (Aoyama Version),” held on the 25th and 26th, featured performances based on a score fashioned out of perceptions collected in the Aoyama area. These programs functioned as the framework under which various events and exhibitions were held—some simultaneously—from Aoyama to Sugamo as well as online, making it entirely impossible for one person to attend all of them. As what exactly was going on at each venue wasn’t made entirely clear, the bar for stepping through the door was placed rather high, but perhaps this stance was part of the effort to break down the accepted structures and rules of watching plays in the interest of uncovering new domains. For example, “Lost and Found Beach Tour,” held at 11:30 a.m. on December 23 with Chiharu Shinoda as guide, took the shape of a tour of Spiral Hall, the venue. Attendees were allowed special access behind the scenes to see Nobuyoshi Araki’s photographs still on display on the fire escape, spray mist on the urethane that Aokid uses in his workshops, and exchange stories about the time when Dumb Type performed there. It was as if the audience’s active participation brought the memories and history of Spiral Hall to life in a multifaceted way. 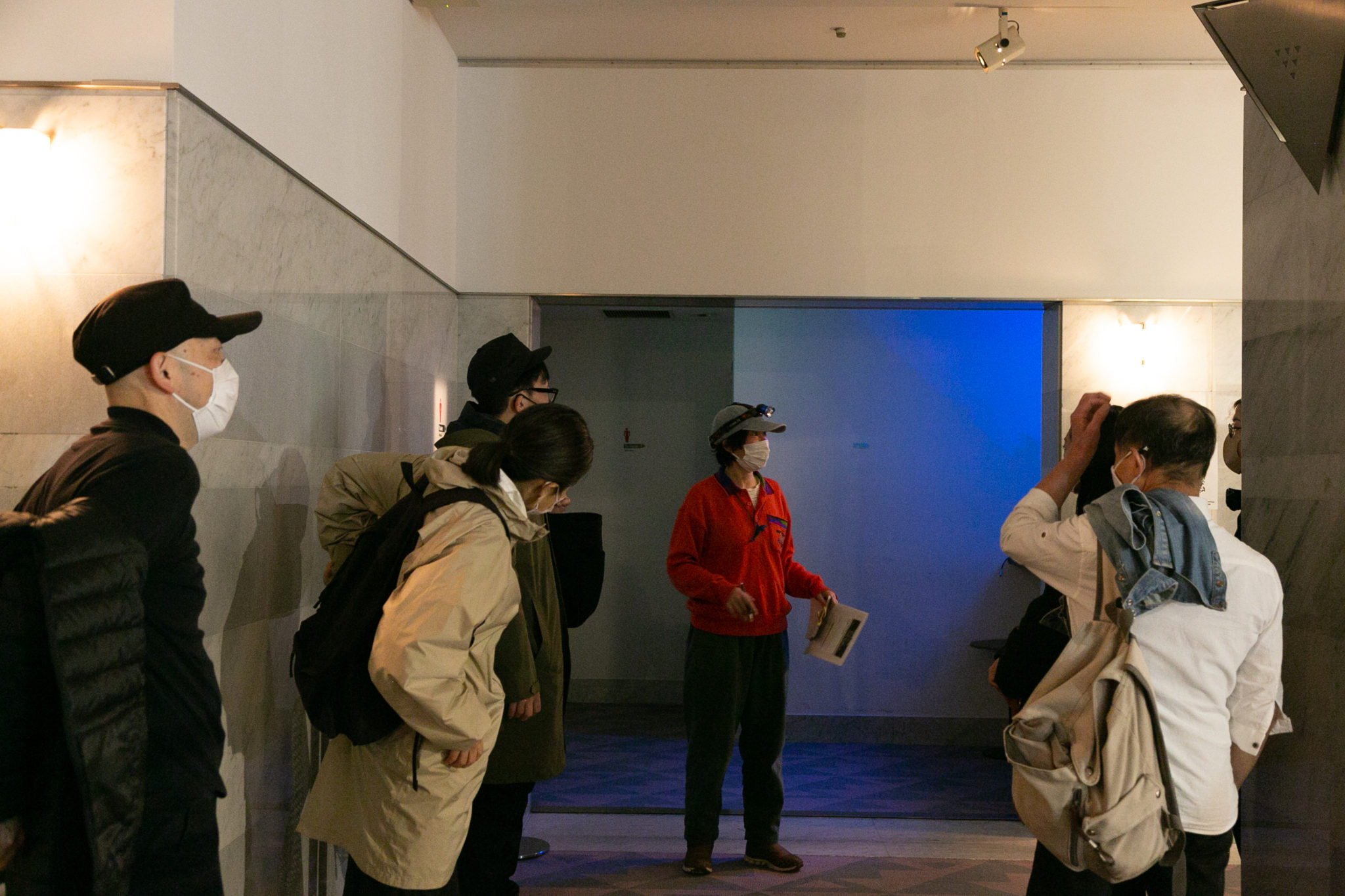 After “Lost and Found Beach Tour,” I attended other events in the “Mapping Aroundness” program practically all day on the 23rd, catching “Future Anarchy,” “Live coverage of Invisible Dance,” “Hijikata Meets Spiral, with Yameru Maihime (The Ailing Dance Mistress) as Text,” and “Lame Uncool Dance,” the last show of the day, missing the events that were taking place simultaneously. Among these, the ones that left a lasting impression were the works by Osamu Shikichi and Natsuko Tezuka, which touched on “aroundness”—a physical sensation we have but are unaware of. 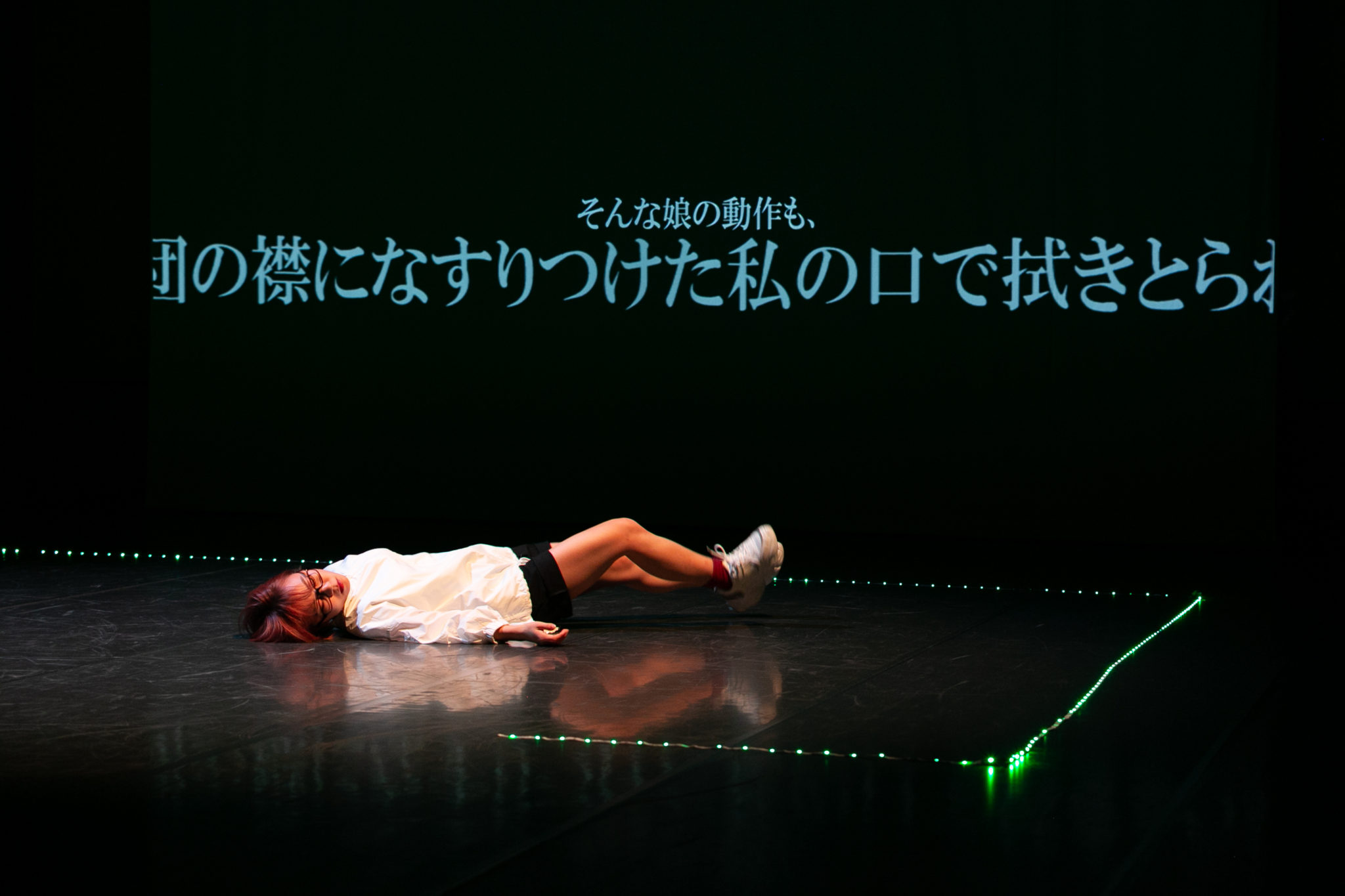 Inside the hall, a large screen hung on the wall to the right, surrounded by seats along the wall. Osamu Shikichi, whose program with spacenotblank in “Future Anarchy” began at 1 p.m., is the kind of choreographer who carefully observes his own body, but the results of that expand outward rather than remaining within his internal world. In “blooming dots (solo research),” the first short performance of three in his work “magical eyes,” Shikichi’s left hand was first depicted through a smartphone camera video projected onto the big screen. This was then replaced by a recording of his past self, lifted out of a smartphone folder, linking with the hands of others using shapes of hands. The moment of looking at one’s own hand through the phone and the moment of it becoming an image of the past were intersected to “attempt transplantation of one’s own senses onto an image of someone else’s body. *2” Copying the body in the recording, and transferring that sensation of the other onto oneself could be understood as imitation, but what about transplanting one’s own sensations onto a smartphone image (i.e. a virtual representation)? The hand in the video was grabbing things and moving a burning rose. Watching the video, and Shikichi moving his hands while viewing the clip on his phone, gradually began upsetting the senses of those in the audience. Here, the internal sensation of the body and the impression of it perceived through vision are disturbed through the mediation of the smartphone screen and the movement of the hands. In the second part, “highly chu,” Shikichi was taking small steps to the rhythm of a song, but when the music suddenly stopped, the playback speed and movement both slowed. Though the action that followed was the everyday activity of sitting, its pronounced slowness drew attention to the process involved in its execution, revealing gestures that otherwise remain unseen. Betraying this languishing sense of speed during the performance was drool and wrapping paper falling as a result of gum being chewed. The body highlighting the fiction of slow motion intersecting with the actual flow of time made for an impressive moment. 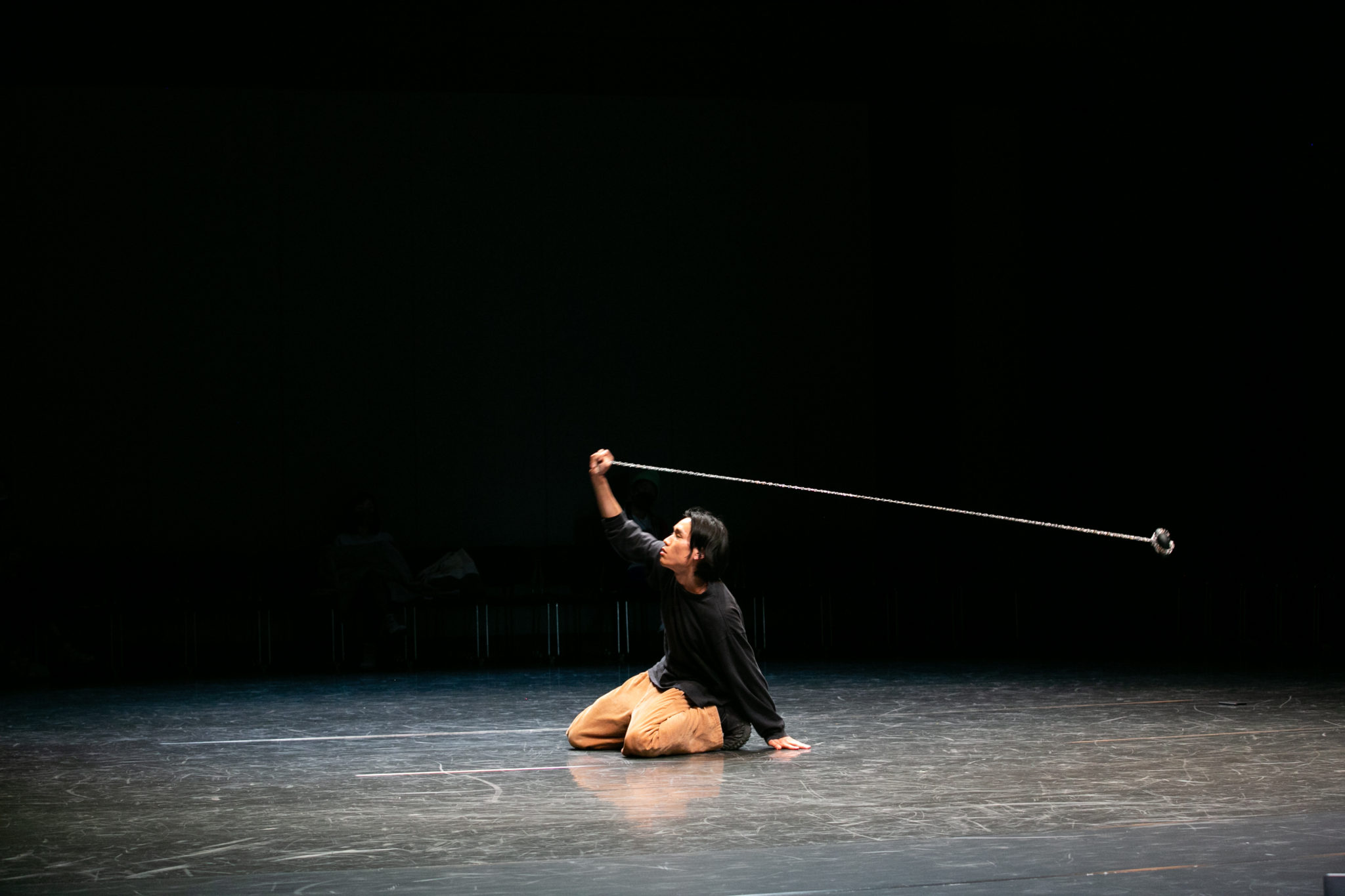 Natsuko Tezuka’s “Live coverage of Invisible Dance” was the literal practice of dance emerging entirely from imagining a body that isn’t there in front of you. In the dark hall, a spotlight illuminated a lone space in front of the screen. Tezuka’s voice was heard, her words guiding the audience to imagine the dancer absent from the spotlight. There appeared to be two possible modes of viewing the performance. One involved keeping one’s eyes open and trying to imagine the figure, i.e. the other, dancing in the spotlight—a process of external construction based on the impressions given by Tezuka’s words. The other mode was to close one’s eyes and mobilize the inner senses, taking in the performance as if oneself was the dancer. The words spoken were about the impression of water flowing through the body, with that water being absorbed by the ground underneath one’s feet and passing through the Earth’s mantle before arriving on the other side, stimulating the inside of the body and one’s sense of self-acceptance. These twin modes switched on and off as I opened and closed my eyes, producing an extremely rich dance experience despite the absence of any dancer. 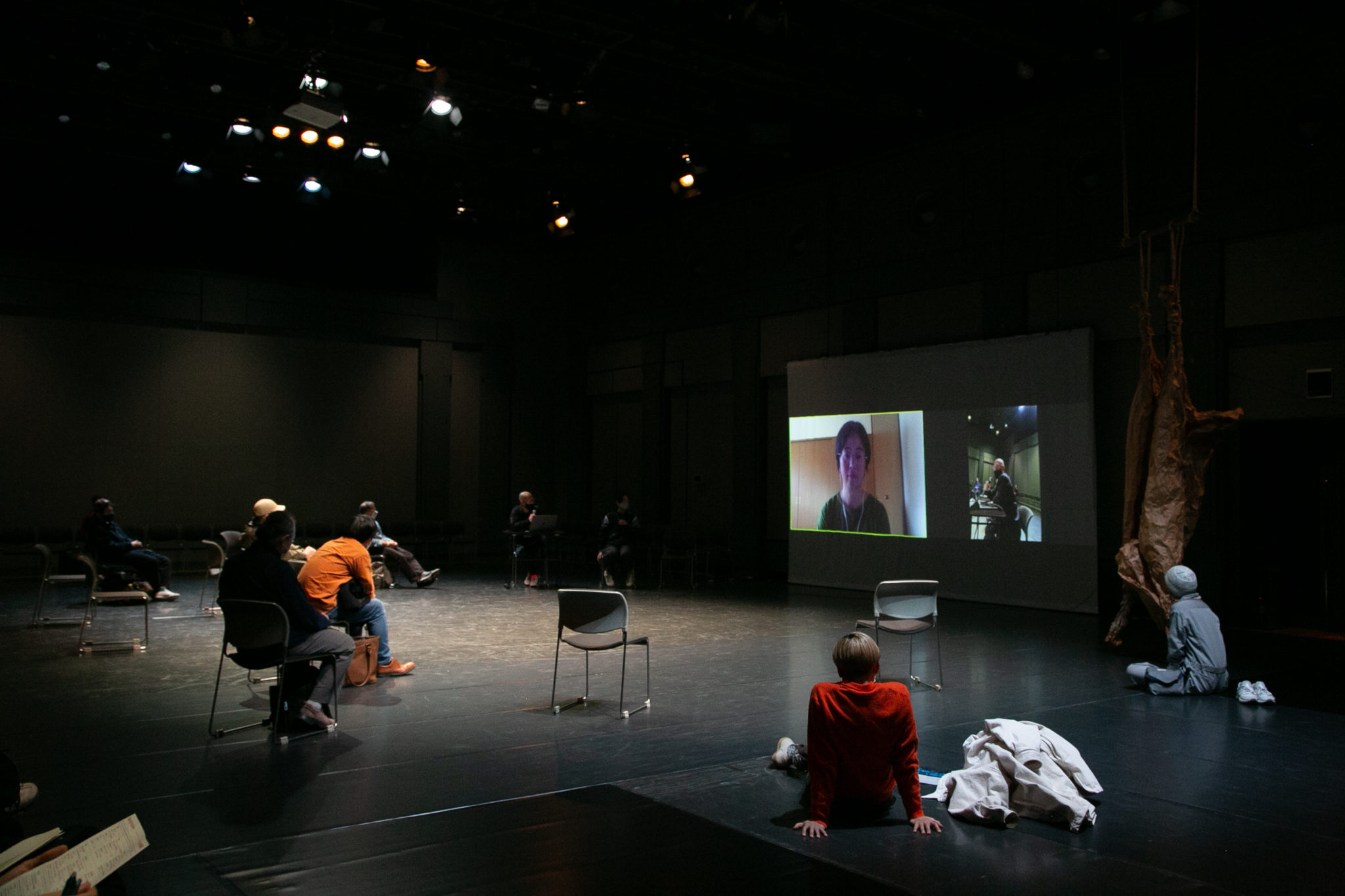 Just like the concept of bodily “aroundness,” the festival as a whole appeared to exhibit a certain heterogenous quality that made it difficult to grasp. That, however, is the very feature that can be said to capture its urban character. In addition, rather than concluding then and there, each of the programs demonstrated a potential to continue developing. That’s to say they weren’t presented as fixed, final products (which isn’t possible in the first place when talking about works of performing art), but rather as entities that will keep changing fluidly, progressing or regressing, merging with or mutating into something else; an attempt that highlighted these ongoing processes.

Whenever Wherever Festival 2021 Mapping Aroundness

Researcher in the field of dance. Graduated from the University of Tokyo, Graduate School of Arts and Sciences, Department of Interdisciplinary Cultural Studies (Culture and Representation). Ph.D. (Interdisciplinary Cultural Studies). She is currently an assistant professor at the Department of Body Expression and Cinematic Arts, College of Contemporary Psychology, Rikkyo University (fixed term) and a research fellow at The Tsubouchi Memorial Theatre Museum, Waseda University. Her research focuses on Butoh and contemporary dance, with a particular focus on Kazuo Ohno. She is the co-author of The Routledge Companion to Butoh Performance (2019). In addition to her research activities, she has contributed to theatre reviews such as Theatre Arts, Dance Work, artissue as well as other publications. She has also worked as a dramaturg and performer in theatre company SYAKE-SPEARE and other productions.