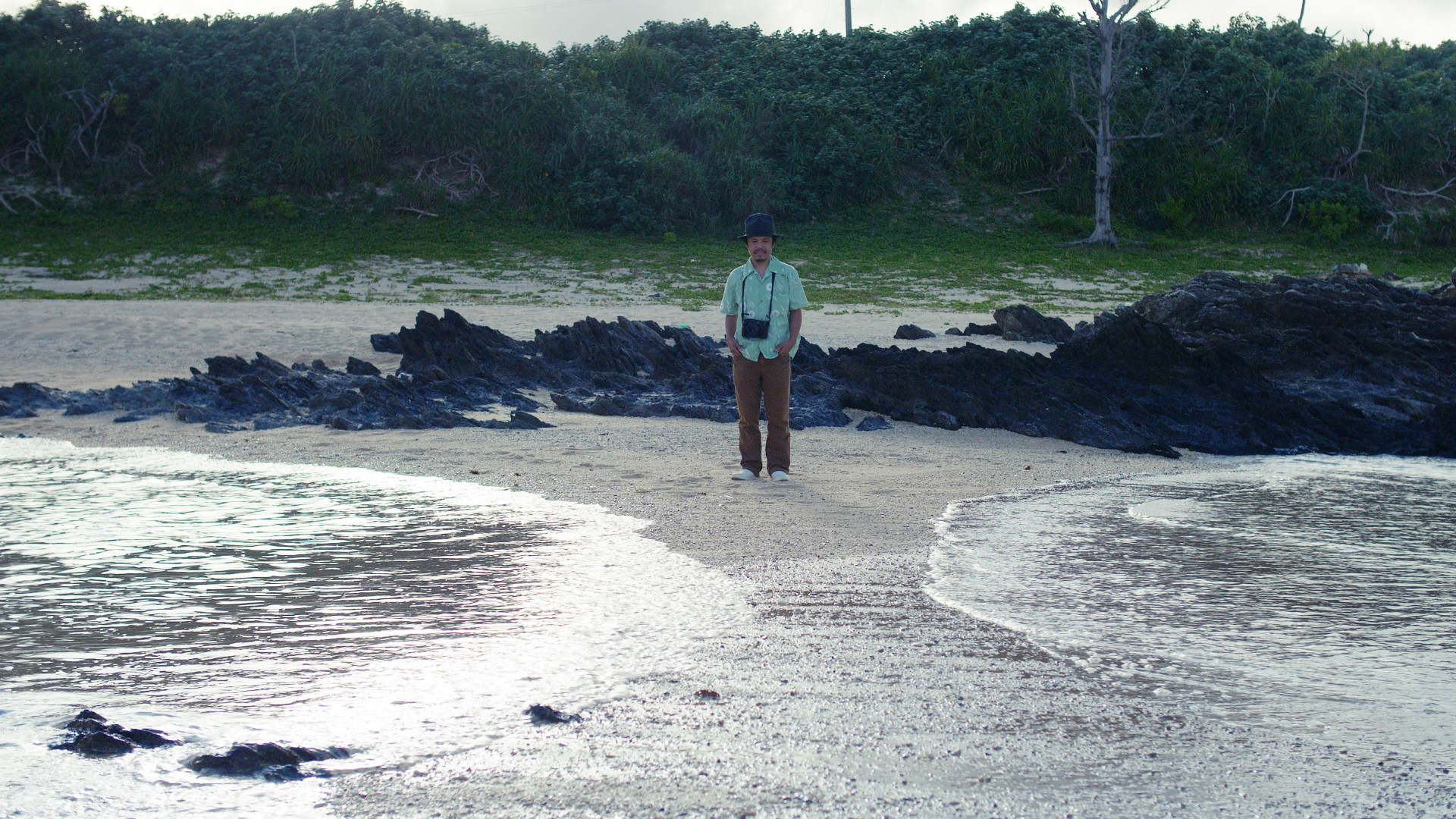 The folk singer Wataru Takada has a song called Keizu (“Family Tree”), the title track on his second 1972 record. Based on a poem by Taku Miki, it’s a entertainingly told story of how a family’s ways get passed down in an unbroken line from parents to children and grandchildren, and about the everyday happiness found therein. It’s a very typical Wataru Takada track, the melody of which unexpectedly appeared in my head during the first half of Resonance, after having seen a photo of the protagonist Takuji Aoyagi’s grandfather – a guitarist just like his grandson – and having heard Takuji’s mother tell a story, then watching Takuji descend onto a beach holding hands with his two daughters. That melody resonated with the events on screen. 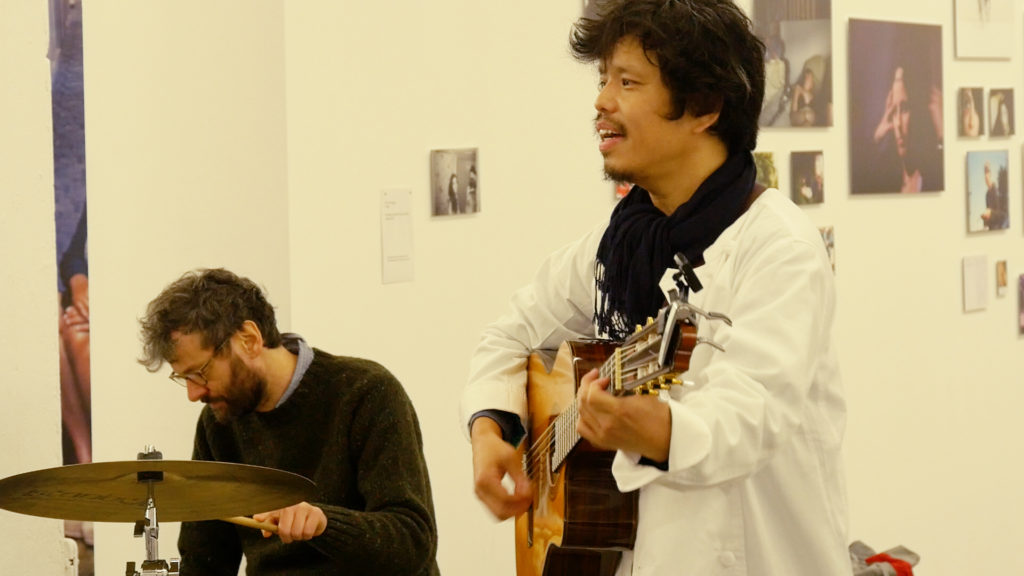 Produced, written, shot, edited, and directed by Toshinori Tanaka, who is based in Onomichi, Hiroshima and known for films such as Super Local Hero that steer clear of the values and expectations of the mainstream, Resonance is a documentary that follows the daily life and activities of the musician Takuji Aoyagi. It is mentioned in the credits that the oldest footage in the film is from six years ago, and the locations it was shot in vary from various places in mainland Japan to Aoyagi’s home in Okinawa and to foreign cities such as Leipzig and Munich, as if mirroring its internationally noted protagonist’s diverse musicality. I mentioned that Resonance is a documentary, and while that isn’t untrue, the film is not a record of the making of any specific work or event, nor does it make any consistent argument. A film of few words, it could be taken as a call to be attentive to the things that connect the musician and the listener – a call set to the compassionate tunes of Takuji Aoyagi’s music. First, its complete lack of assertiveness is attractive. Toshinori Tanaka merely surveys Aoyagi’s family tree and daily life in an attempt to find out what it is that draws us to his music. 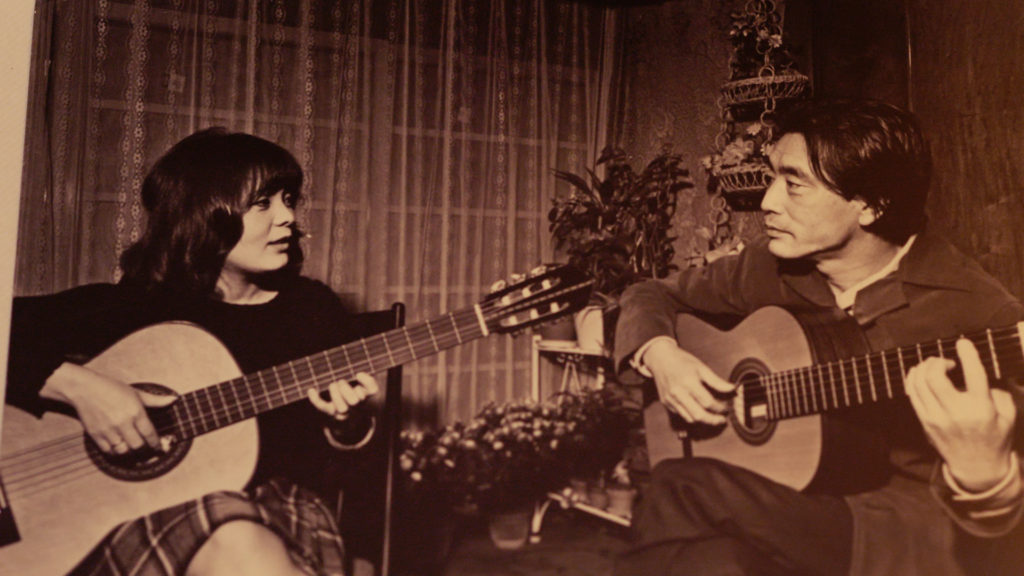 That secret is weaved from vertical and horizontal threads.

The vertical bit is, as I mentioned, Aoyagi’s personal history, his “family tree.” Takuji’s maternal grandfather, Yasumasa Obara, was a classical guitarist born in the Taisho era who studied his craft in Spain. In his daughter’s words, Yasumasa dedicated his life to the guitar and to the popularization of guitar music. In the film, his story is told by that daughter – Seiko, Takuji’s mother – who also came to choose a life of music and is now famed for her significant contribution to the Japanese guitar scene. Takuji Aoyagi is therefore a third-generation guitarist, but each member of his family has their own unique approach to music and expression. For example, during his grandfather’s time, the issue of how Asians would go about understanding Western music was one that could not be avoided, but now that we are twenty years into the 21st century, not many Japanese people internalize that problem. Music is instead seen as a global language, one that transcends the borders of nationality, race, language, gender, and age. Fueled by ever greater advances in technology, this ideal is now becoming a reality. The internet has brought the world closer together, and technological advances in the movement of people and goods have made the world smaller. Changes such as these make up the horizontal thread of Resonance. Of course, neither Toshinori Tanaka nor Takuji Aoyagi is one to blindly praise urbanization. The film has a subtle but well-grounded critical streak that is evident in the way subjects such as demolished buildings or the noise of US military aircraft flying around above are portrayed. On the other hand, Tanaka’s sound design appears to treat artificial noise as equal to the sounds of nature – the roar of the sea and waves and the rumbling of the earth. This could also be taken as a firm belief in the power of both the time (vertical) and space (horizontal) of sound. 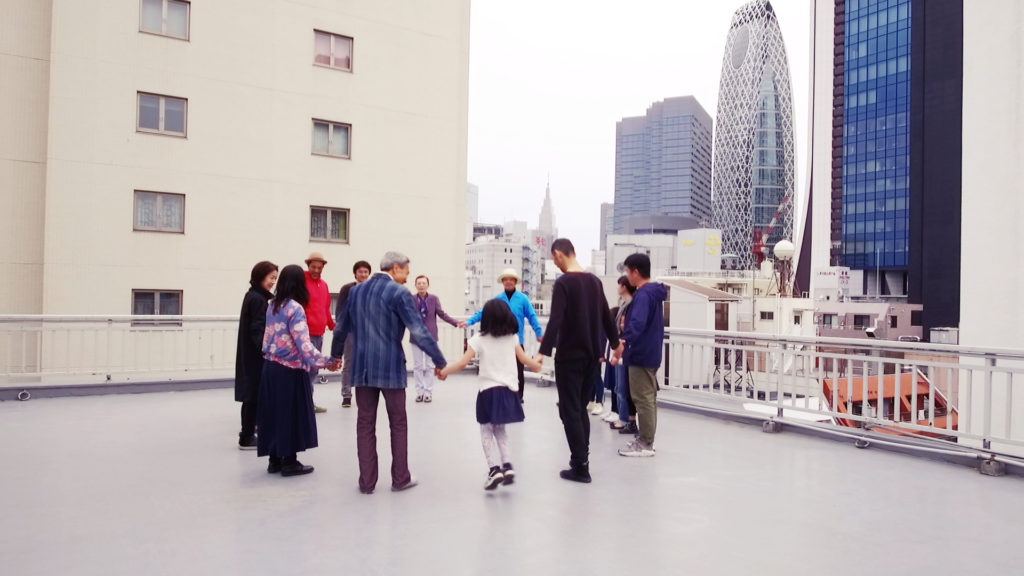 The film ends with a scene where a group of people form a circle on a rooftop in Tokyo and let their feelings out by singing together. This project, called Circle Voice, was started by Takuji Aoyagi and inspired the making of Resonance. It brings to mind a circular view on the world, in which the horizontal and vertical come into harmony, all while revealing the circulatory, without-beginning-or-end structure of Resonance, which is dedicated to those who have already left this world and to those yet to be born into it.

Editor and critic born in Amami in 1972. Matsumura became a freelancer in 2009 after working as the editor-in-chief for the Studio Voice and Tokion magazines. He is the author of Zenei Ongaku Nyumon (“Introduction to Avant-garde Music,” published by Ele-king Books), the editor of titles including Sasageru – Haino Keiji no Sekai (“Devotion – The World of Keiji Haino”) and Yamaguchi Fujio – Tengoku no Himatsubushi (“Fujio Yamaguchi – Killing Time in Heaven”), and the supervisor of Ele-king, Bessatsu ele-king and many other publications. He plays bass in the rock band Yuasawan, appearing on records such as Minato, Funami, Sagoshio, and Myaku (all released on the Boid label).