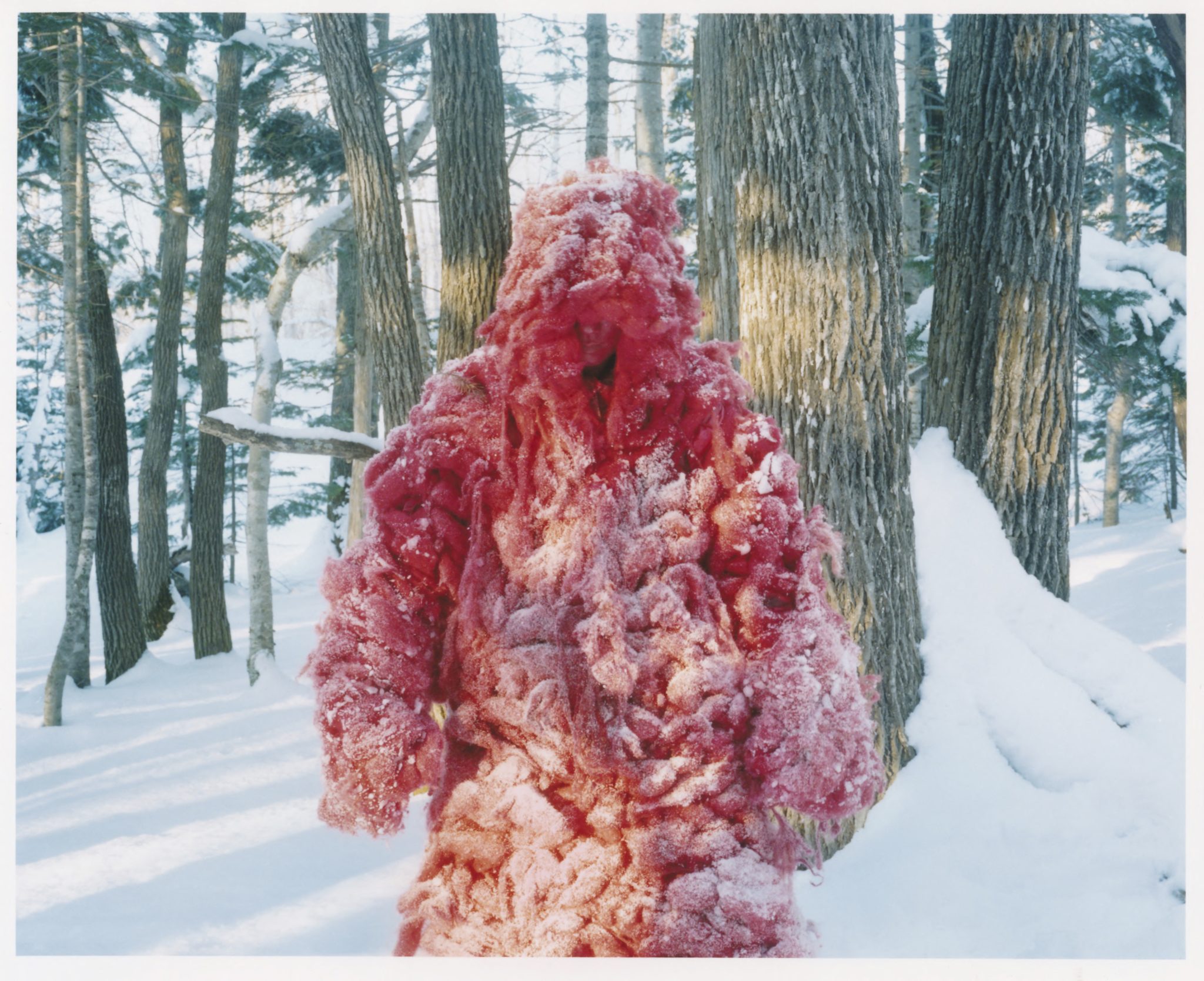 The movie is set in Shari, a town in the world natural heritage region of the Shiretoko Peninsula in Hokkaido. It begins with a scene of Mt. Sharitake coming in and out of view through a veil of clouds, before a strange “Red Thing” coquettishly appears with a crunchy sound out of the snow. The mysterious creature (that just looks what its name suggests) spreads a red piece of cloth on the snow, and starts eating a bun. Out of that bun comes a small bell that rings in the silence, accompanied by a sonic boom. A girl that stepped out of a dream notices the Red Thing as it dances wildly in the snow, and guides the viewer into a fantasy world…

“Shari” was initially brought to life when director Yoshigai Nao, at once also a dancer and choreographer, received an invitation from Ishikawa Naoki and the “Zero banchi Shiretoko Photo Project 2021” that he is heading. This was the start of an extravagant collaboration in which Ishikawa (known among others for his photo books Shiretoko Hanto and Marebito) was to take charge of the camera work. Also involved in various forms and with great enthusiasm were the people of Shari. The music of percussionist Matsumoto Kazuya, according to Yoshigai “the best musician in Japan when it comes to incorporating the sounds of water and ice in a jam session with nature” (follow the link below to read more on this and other secrets about this project; in Japanese only) is in itself a wonderful thing to indulge in. About her work with assistant director Watanabe Naoki, Yoshigai acknowledges that they ”wouldn’t have been able to shoot the movie without his professional way of setting things up.” 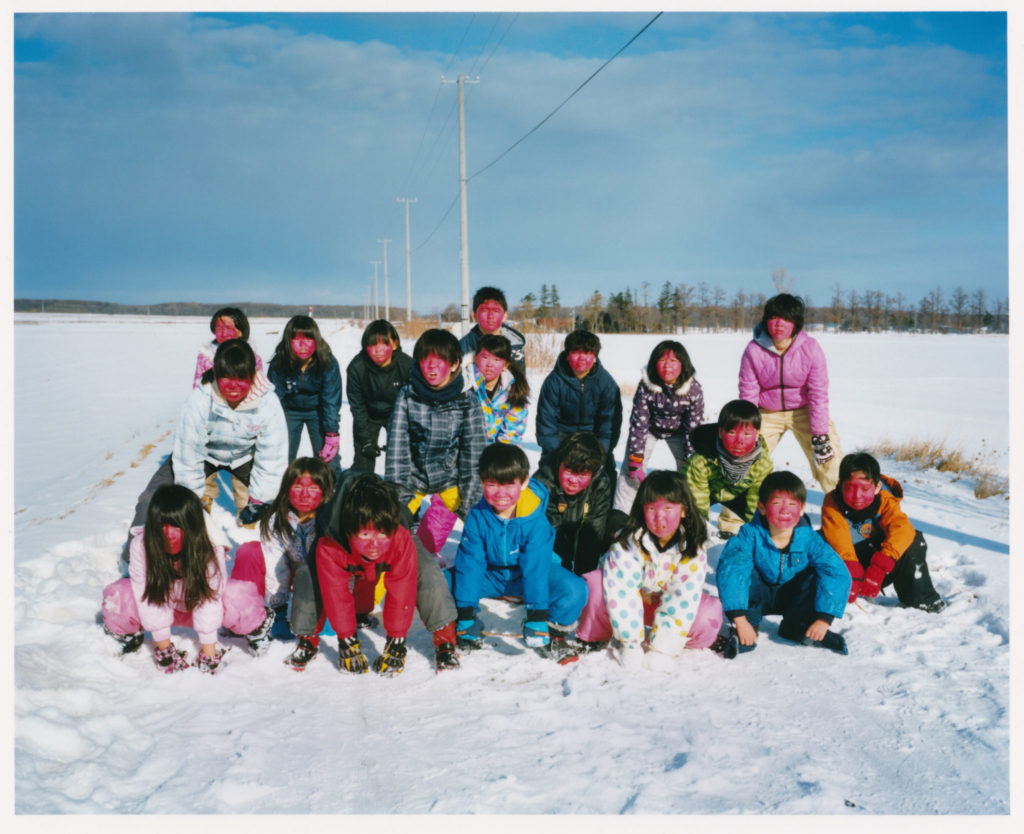 From the fantastic opening scenes, the movie makes a smooth shift to the real world,  where the film team meet the people of Shari, and listen to the stories they have to tell. Among them is Sakurai-san, who shares a house with flying squirrels. Kawamura-san, a deer hunter, treats the team to a venison meal at his house. Then there is Miura-san, a collector of curious figurines; and Ito-san, a fisherman who grapples with the problem of marine pollution. Kowada-san bakes bread in the stone oven of the “Mei Mei Bakery,” and keeps sheep, as she is also a wool artist (the Red Thing was made by a team of about twenty participants of her workshop). There is one certain phenomenon in Shari that all of them are unanimously worried about. It is the abnormal situation of sparse snowfall, as little as it only happens once every forty years, and in addition, drift ice that didn’t come that year. What exactly that means, and how serious a problem it is, is a question that the people living in Shari today are confronted with.

Next to the Red Thing, Yoshigai herself appears also in monologue scenes. ”I can’t sleep, I can’t sleep…,” “My autonomic nervous system is breaking down,” “We take heat away from others for ourselves to live,” and “I think of myself as a beast.” There is a sense of passion in the lyrics that she delivers with a featherlight voice, stringing them together in a way as if juggling sounds.

Yoshigai told me that her stomach was rumbling and she couldn’t sleep the night she had tried deer meat for the first time. Rumbling…? Could it be that this rumble was what gave birth to this movie? As it turned out, the Red Thing can’t sleep either. Sitting under a red lighthouse, its bulgy silhouette looks fragile and woeful like a wild animal that went astray in the city. But he (or she) is at once a brutal, ferocious beast that pitches into the children of Shari and spills their blood. After all, for them this is just plain and simple life. In order to fight the raging billows that judge whether people live or die, the children are grouped into the four teams “Shika” (deer), “Remon” (lemon), “Toba” (dried salmon) and “Koori (ice)” (the first syllables of which together form the word “shi-re-to-ko”), and start wrestling. The gymnasium becomes a pandemonium. ”The wrestling scenes were sublime,” Yoshigai reviews the battle with compassion for the Red Thing that comes out badly tattered. 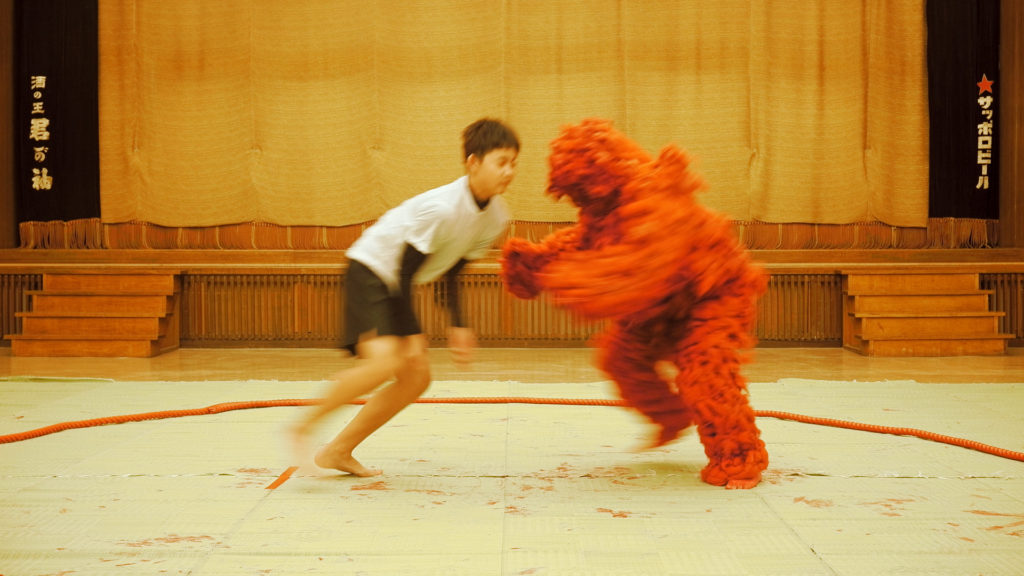 The Red Thing climbs to the top of a rock (reportedly Ishikawa’s own favorite place), and does something rather unexpected. Asked about this scene, Yoshigai explains, ”It seemed like the right thing to do, and I felt comfortable with the result. The idea was that, if things go well, my shout might fly all the way to the Sea of Okhotsk and call the drift ice…” The truth, however, was that ”such miracle didn’t occur, and rather than being able to change the world with a shout, it rather made [her] realize what mankind does.” In 2020, the South Pole recorded the highest temperature in history, while there was snow in Baghdad. That’s of course neither Yoshigai’s nor the Red Thing’s fault. But we cannot ignore the Earth’s cries, and Yoshigai catches them all, using the whole of her body as a receptor so to speak. It made me wonder whether catching too much of it doesn’t cause her pain. “I can discharge these things from my body through the movies I make, and that takes away most of the pain. The fun of spotting and highlighting the connections is actually stronger than the pain. From the point I started making movies, I’ve been feeling the ‘waves’ that occur when joining the dots, and that strengthened my sense of time.” The fascination of filmmaking for her seems inexhaustible. 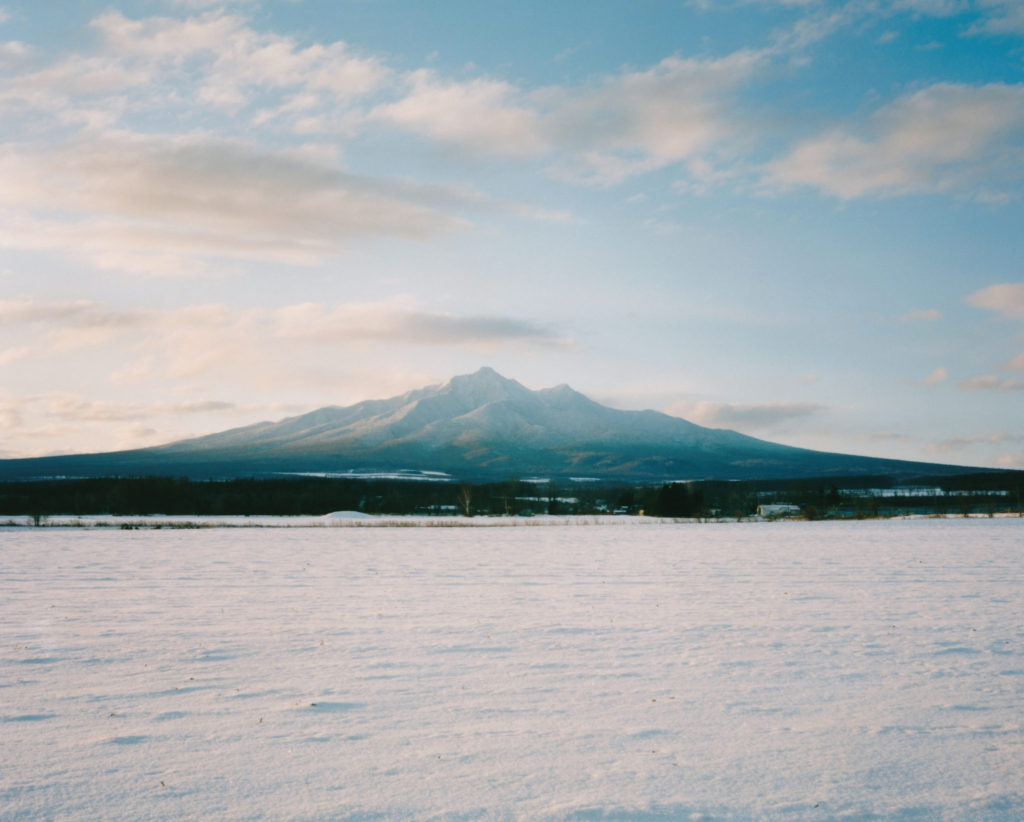 Yoshigai Nao once referred to her works as “tactile movies,” and it does in fact feel as if one can almost touch the images and the music in them, with one’s skin and one’s viscera. While the methods she employs in “Shari” are different, the touch reaches deep into matters related to the vast natural surroundings of the Shiretoko Peninsula, animals, the nature of mankind, ecology, and abnormal weather.

The wind blows the veil of clouds away, and Mt. Sharitake shows itself. “All things keep changing, and ‘time’ is generated by joining the dots between them,” Yoshigai explains her view. Cinema keeps evolving as well. Here the ideas of Yoshigai and her team have been condensed into a movie of 63 minutes that mixes in a novel kind of way elements of fiction and documentary. It may even cause a rumble in your stomach…

(Interview with Nao Yoshigai in Japanese only)