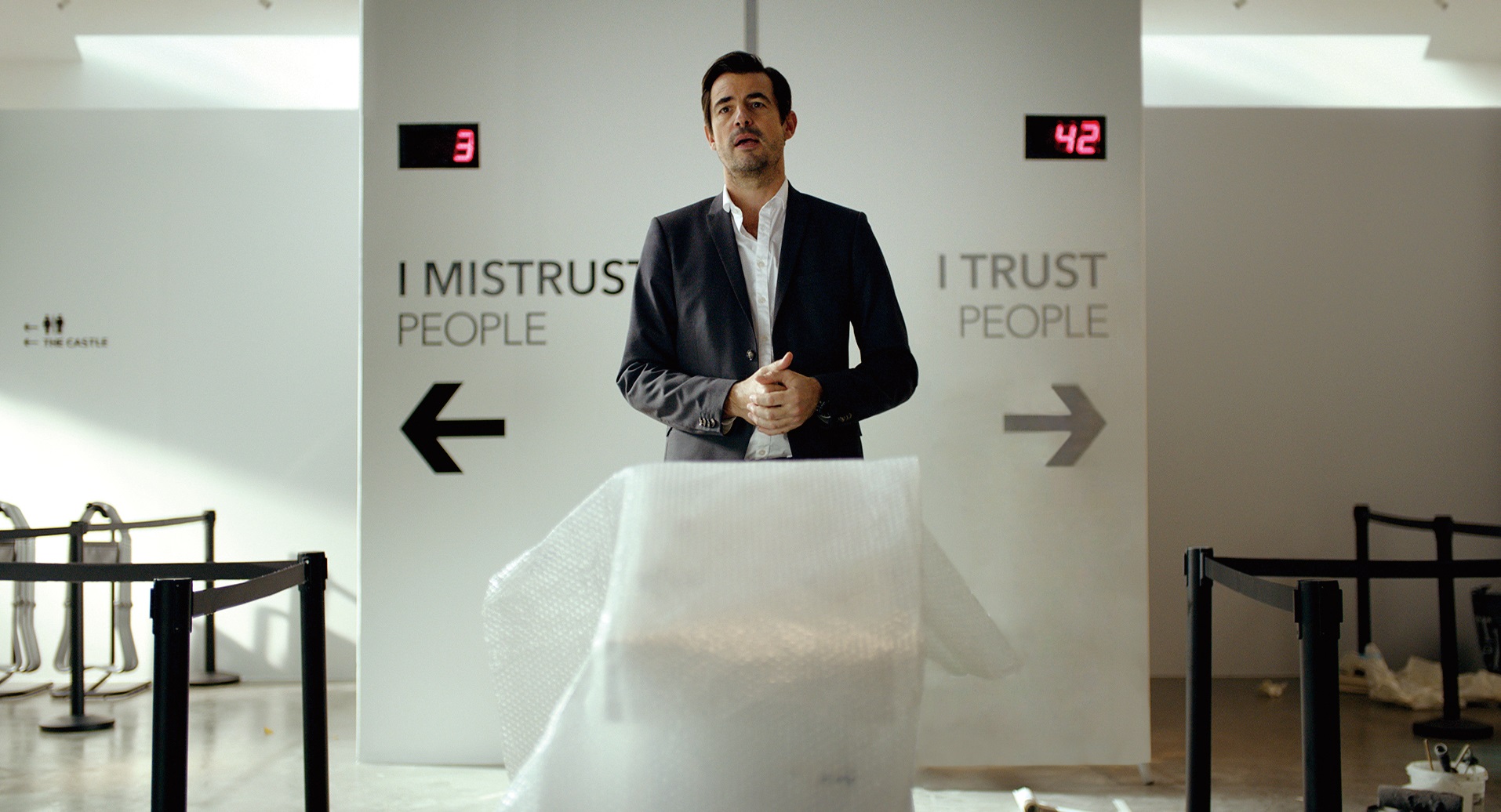 Christian is chief curator at a contemporary art museum. When asked about the meaning of such things as “exhibition/non-exhibition” and “the construction of publicness in the spirit of Smithson’s site/non-site” on the museum’s website, he is at a loss for an answer. He somehow manages to bumble through, but that’s only the beginning of a movie full of unintelligible contemporary art jargon. There is at once an indescribable sense of disquietude that oozes out from the clumsy interaction between interviewer and interviewee.

This is additionally intensified in a scene in which an equestrian bronze statue is removed from the museum’s front yard using a crane. Supposedly made in the 18th or 19th century, the statue (probably of the country’s king) slips, crashes onto the pedestal, and breaks into pieces. While the viewer is dumbfounded, everyone in the movie remains unshaken. The incident probably indicates that former icons of power have served their purpose, however there are also foreboding signs in it.

Set up in lieu of the old icon is a new cultural device: a square outlined using luminescent material – a piece of contemporary art that became the title of this movie. Attached to it is an inscription board that reads, ”The Square is a sanctuary of trust and caring. Within it, we all share equal rights and obligations.” It is a participatory work that appeals to the viewer’s sense of solidarity, as it declares that anyone who steps inside the square has the right to ask for help, and people have to offer help to those who demand it. 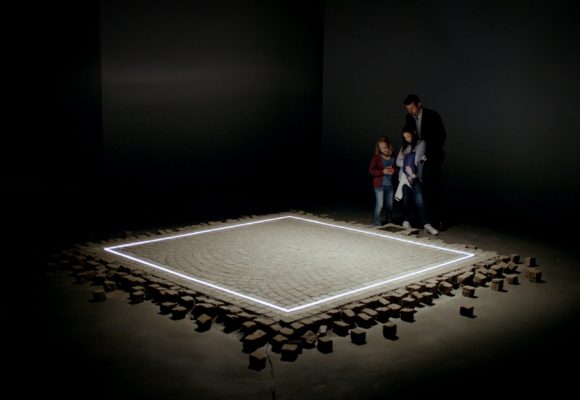 Even in Scandinavian countries that are known for their advanced welfare systems, issues related to immigration and the gap between rich and poor keep inflating. Together with a friend, director Ruben Östlund had the idea to create some kind of symbol that takes effect in a society penetrated by indifference toward others (the bystander effect), something like a zebra crossing where people automatically follow certain rules. In 2015, they eventually exhibited a work at a museum in Värnamo, a town in the southern part of Sweden. It was “The Square.” The fact that the work in the movie is not fictional but an artwork that really exists charges the movie with a unique sense of reality (“The Square” was later moved to a public square in Värnamo, and was also installed at two other locations in Sweden.)

The story, however, takes a cruel turn. During the planning of an exhibition around “The Square” as a centerpiece, Christian’s wallet and smartphone are stolen, which prompts him to do exactly the opposite of his credo of a “reconstitution of mutual trust between human individuals.” Due to his carelessness, a promotional film made by a PR company to advertise the exhibition ends up causing a stir on YouTube. The further he is driven into a corner, the more he falls back on clichés and lets off childishly haphazard comments such as “Why is that so hard to admit that power is a turn-on?” or “Nothing should stand in the way of freedom of expression.”

But it’s not only about him. Most other characters that appear in this movie are somehow out of balance. There is Christian’s assistant, who advises him to write a threatening letter in order to get his wallet and smartphone back; the museum restaurant’s chef, who suddenly yells at people; an American journalist who lives with a chimpanzee; members of the museum’s PR department and PR company employees who enjoy the buzz around their movie; a boy who chases Christian around, insisting that he apologize… All this culminates in the appearance of the performance artist Oleg as a monkey. His performance embodying “an animal that got lost in the civilized world” that is supposed to entertain the board of directors at their party turns violent as Oleg runs wild. What is exposed here is the dark side of human society, and the things that get revealed when scratching the surface even of the wealthy upper class that supports the museum. 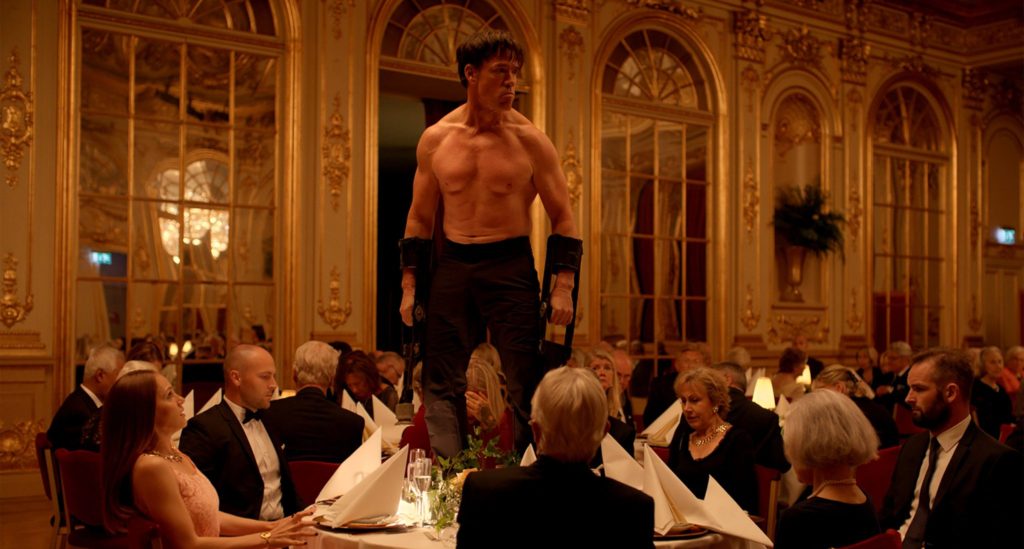 Speedy as a slapstick tragicomedy, the 151 minutes of this movie are sprinkled with black humour, and tinged with “intolerance and mistrust” much rather than ”tolerance and solidarity,” whereas it probably depends on the viewer how to interpret the repeated acts of people’s estrangement from their personal creeds; the portrayal of a human nature that unintentionally causes harm to others in chains of coincidences; and matters of authoritarianism and deception in the cultural realm of ”contemporary art.” The ”X-ROYAL” banner on the museum’s facade presumably stands for “ex-royal,” referring to a fictitious museum in Sweden after the extinction of the royal authority. Sweden is presently a constitutional monarchy, and the museum in the movie is Stockholm Palace, which is used as a royal palace still today. With this in mind, “The Square” very carefully hints at the possibility that the cultural device that surfaces here in the form of a piece of contemporary art may even become a new authority. This is one movie rich in nuances that will leave you with complicated feelings.